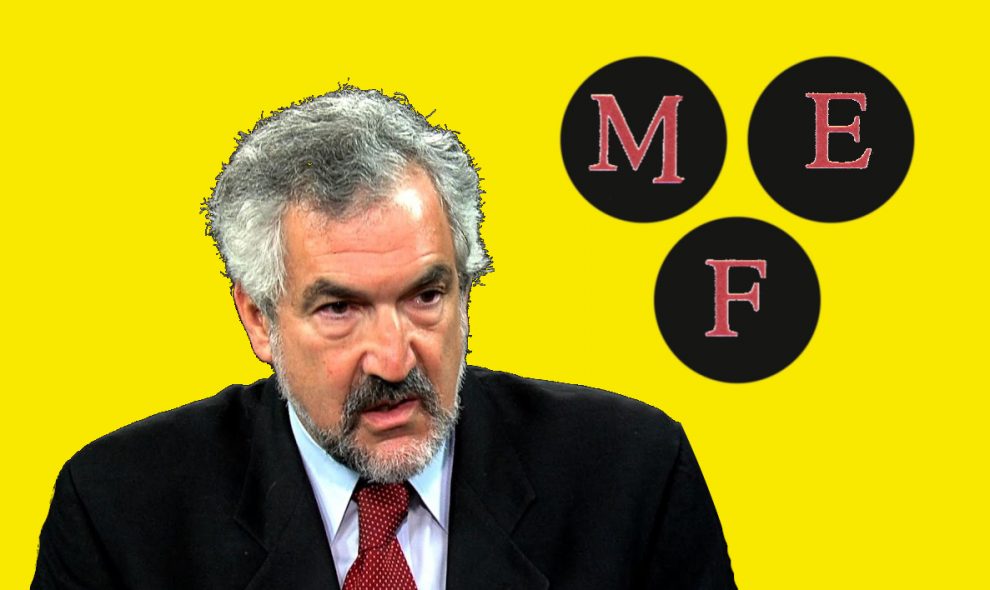 Last month Daniel Pipes, who runs the anti-Muslim think tank Middle East Forum, returned from a “fact-finding” trip to Europe where he met with political leaders, including members of the far-right Freedom Party of Austria (FPO).

The purpose of the trip was to learn more about the current situation with Europe’s immigrant and Muslim communities.

For the past several decades, Daniel Pipes has promoted rabidly anti-Muslim views. In a 2006 blog post he falsely claimed there were 751 “no-go zones” in France controlled by Muslim vigilante groups where government services, including police, could no longer enter. Over the next nine years, Pipes would continue to defend that myth, updating his original blog post with anti-Muslim commentary supposedly showing these areas were spreading to other parts of Europe. (His last update to the post, in December 2015, continued to propagate the myth in slightly milder form, settling on the term “partial no-go zones.”)

In 2004, as part of his vision for fighting terrorism committed in the name of Islam, Pipes endorsed hard-right pundit Michelle Malkin’s book In Defense of Internment. He praised the book saying, “Ms. Malkin has done the singular service of breaking the academic single-note scholarship on a critical subject, cutting through a shabby, stultifying consensus to reveal how, ‘given what was known and not known at the time,’ President Roosevelt and his staff did the right thing.” (Like his “no-go zone” claim, Pipes has continued to defend his endorsement of Malkin’s book.)

However Pipes’ history of anti-Muslim views goes back much further. As early as 1990, he published an essay in the National Review, which declared that, “Fears of a Muslim influx have more substance than the worry about jihad. Western European societies are unprepared for the massive immigration of brown-skinned peoples cooking strange foods and maintaining different standards of hygiene.”

Pipes’ nativist and racially-tinged hysteria toward immigrants and Muslims has deepened rather than abated.

On April 4, Pipes published an op-ed in the Washington Times, arguing that because immigration and so-called “Islamization” (what he refers to as “I&I”) are the “key issues in the West’s future,” Western political leaders should consider “working with” far-right groups like the FPO, “not marginalizing it.”

While paying lip service to concerns about the fascist origins and far-right orientation of the FPO, he concluded, “For all their shortcomings, parties focused on I&I are key to Europe remaining part of Western civilization. I&I are not only more urgent than neo-fascism, but the latter can rather easily be undone, while I&I lead to immense, unfixable, and permanent changes.”

Rather than engaging in a course correction, 10 days later on April 14, Pipes published another op-ed in The Australian where he expanded upon his ideas laid out in the Times piece.

In The Australian, he favorably cites a longer list European and Australian far-rightists – each with their own not-so-distant histories of bigotry and racism he conveniently downplays or overlooks – including Hungarian Prime Minister Viktor Orban, France’s National Front, the Dutch Party for Freedom, the Sweden Democrats, UKIP leader Nigel Farage and Australian One Nation Party leader Pauline Hanson.

He repeated the same conclusion made in the Times piece, but upped his anti-Muslim and thinly-veiled racist rhetoric saying, “I acknowledge their many faults, but parties focused on immigration and Islamism are essential for Europe not to become an extension of Northern Africa, but to remain part of the Western civilization it created.”

Pipes also made the untenable claim that, “They are not violent, they do not seek to overthrow the constitutional order.” While it is true that these parties are not directly engaged in terrorist violence, it is undeniable that they have a history of creating political environments that enable violent individuals who are their ideological fellow travelers and party supporters. Many of these parties have past and present officials with fascist and pro-Nazi backgrounds and have issued statements advocating for un-constitutional policies. Examples like Viktor Orban’s increasingly authoritarian style of governing further call into question their collective commitment to a democratic, constitutional order.

In 2005, noting the largely unsuccessful attempt by far-right parties to stoke and capitalize upon anti-Muslim fears in Europe, including a handful of individuals who identify as Jewish,The New York Times interviewed Nobel Prize winner and Auschwitz survivor Elie Wiesel. Wiesel’s stance on outreach from the European far-right was unequivocal: “Whatever crisis we’re enduring, no Jew should go to the extreme right… A Jew should never be an ally of racism, because we know what it is.”

Pipes, who identifies as Jewish and is a trained historian, not only advocates working with parties that have well-documented track records of antisemitism, racism, xenophobia, fascism and authoritarianism, but also downplays those records.

Rather than heeding Wiesel’s words of wisdom, Pipes has instead allowed himself to be blinded by his own fear of Muslims and brown-skinned immigrants, whom he sees as outside of “Western civilization” rather than as fellow citizens. As a result, he has nakedly made the case for nothing short of a Faustian bargain.

Crackdown on Muslims in India’s Assam
An Arab NATO?
Comment