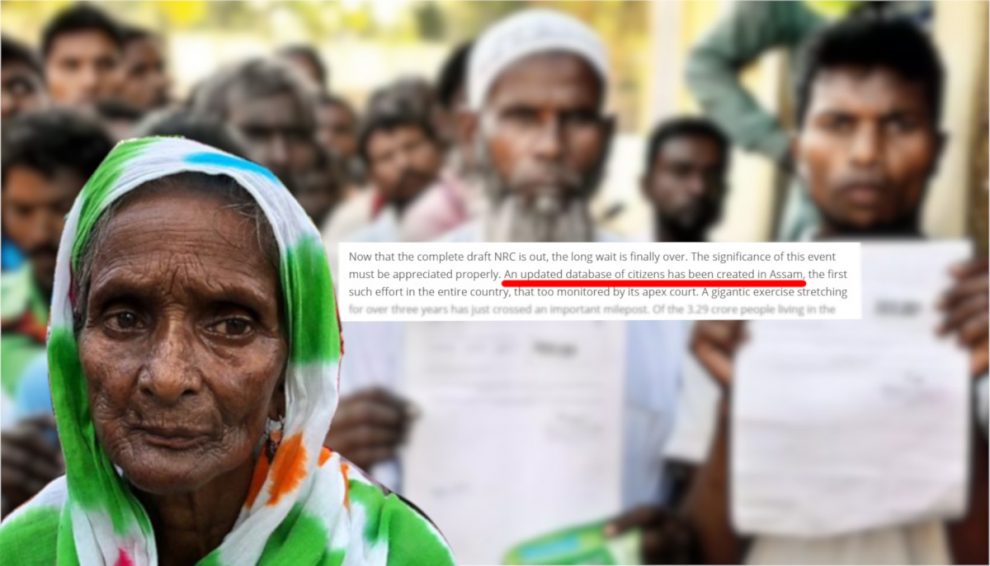 Imagine this: You are living as a legal citizen of a country, and one day, the people in the capital city decide to create registrars of the nation. And you learn that, along with four million other people, you are not registered as a citizen. You no longer have a record in the population database, no entry with your name, last name and whatever other items they keep in such records. You don’t have an ID card anymore. No passport. You become an alien in your homeland. This happened to you and four million other Muslims.

One could expect such things would not happen after Adolf Hitler disowned more than half-a-million Jews living as German citizens for centuries in Germany. Before Hitler started the Holocaust in which six million people perished because of their religion, hundreds of thousands of Jewish Germans emigrated and thus saved themselves and their children from certain death at the hands of Christian Germans. It still hurts when you put such facts in senseless and stark sentences because whatever you say cannot convey the suffering of real people and the fear them and their children had. Think of the helpless and powerless parents who somehow tried stopping the tears rolling down from their children’s eyes and tried to alleviate their suffering and fear.

The same thing is happening in a million households in Assam today because 2.7 million Assam Muslims were not registered in what they call the draft list of the National Register of Citizens (NRC). Not only Muslims, but people of other faiths and races from Bengal were too, effectively stripped of their citizenship of Assam and India.

The national registrar of India, Shailesh Kumar, with a fake smile on his face, says, “No genuine Indian citizens needs to worry as there will be ample opportunities given to them to enlist their names in the final list.” But the keyword in this nonsense explanation is “genuine” because it is so subjective in the official Hindu legalese. One might think that a retired Indian army officer is a “genuine” citizen of India. But that was not the case because Azmal Hak, a resident of Assam was not registered. Hak rightly says that this is not what he wanted to see after serving the nation for three decades.

Now India is the home to the world’s largest stateless population. Myanmar, which denies the citizenship of 800,000 Muslims, lost its spot on the top of the list. But it is still the first in drowning women and children in rivers as it forcefully pushes them to Bangladesh.

It is historically known that Bangladesh is one of the main sources of economic migration. A fraction of what oil-rich degenerate emirs shell out on their horses and hawks could help Bangladesh improve its industrial infrastructure to keep all its “wretched, hungry, starving poor” in the country. Until then, however, its rich neighbor India should carry the burden of that misery. The anger the Hindus still feel stems from the fact that what is known today as Assam was the name of the East and West Bengal. Bangladesh first became a part of Pakistan under the name of East Pakistan, and in 1971 became independent.

Bangladesh started its independence with all the wrong steps. West Pakistan’s extensive economic discrimination against East Pakistan, greater government spending on West Pakistan, financial transfers from East to West Pakistan and the use of East Pakistan’s export revenues to finance West Pakistani imports had already almost ruined the country. Today its overpopulation (it is the eighth most populous country in the world and third largest Muslim majority country), yearly ruinous floods, corruption and its corollary lack of investment in human capital keep Bangladesh poor. The result is the never-ending economic migration to India.

What India is getting ready to do is going to make everything worse. Bangladesh cannot possibly take four million people back. Such colossal undertaking as migrating four million men, women and children through the deltas of 700 rivers is prone to human disasters. Hundreds, even thousands of people will die.

Instead of such vindictive and cruel actions such as stripping the citizenship of four million people who had paid taxes, went to school, served in the military and police forces of the country, India can lead the world’s rich Muslim countries to create an economic consortium to rebuild the Bengal economy. Turkey has offered its contribution last year to Bangladesh and world community in organizing such help.

The world showed the possibility of such an endeavor when the Bengal tiger was declared an endangered species.

Bangladesh has the longest unbroken sea beach in the world, Cox’s Bazar Beach, and it houses an incredible number of animal and plant species. With a little help Bangladesh can turn it into a tourism and service economy. India should get rid of the fear of “demographic invasion by Bangladesh” and it should not pave the way for another wave of Assam violence like when hundreds of Bengali Muslims were killed by Hindus in 2012.

Assam Muslims are the likes of Shāh Jalāl ad-Dīn al-Mujarrad al-Naqshbandi, a celebrated Sufi Muslim figure whose name is associated with the spread of Islam into northeastern Bengal through Sufism. Hopefully, Muslim countries recognize the importance of keeping this endangered jewel in the Bengal jungles.