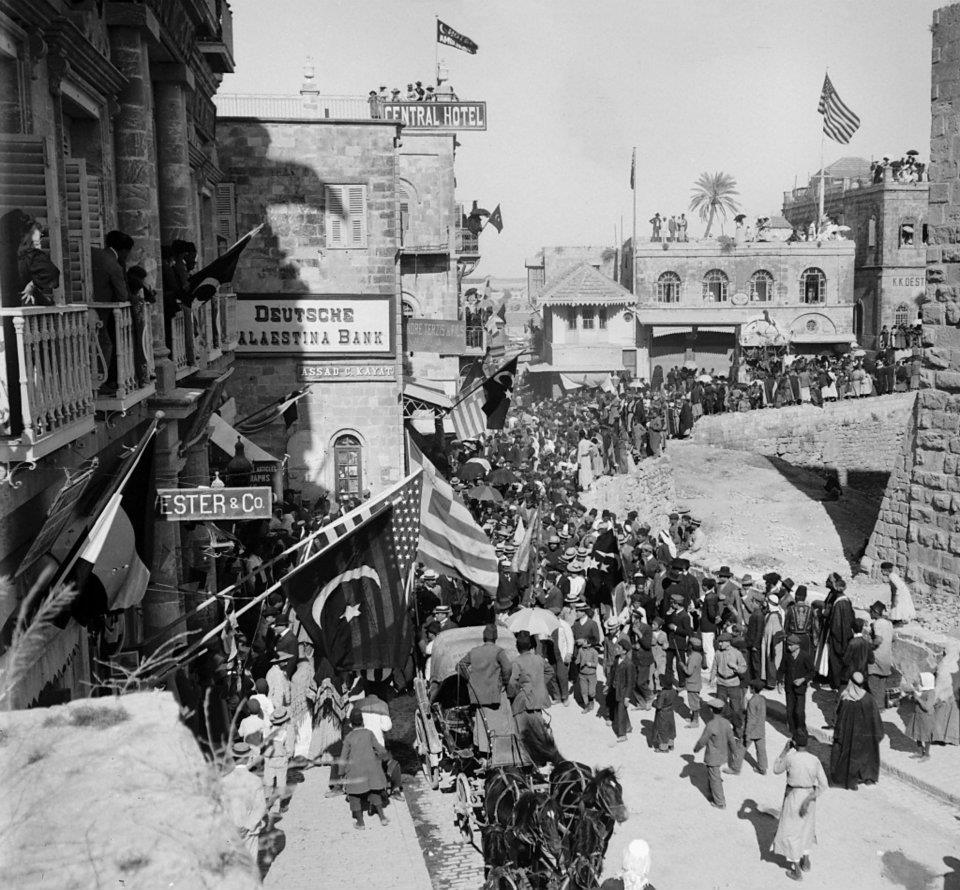 Arab lands such as Syria, Iraq, Egypt, Palestine, Hejaz, & Yemen came under Ottoman rule after the
defeat of the Mamluks by Sultan Selim 1 in 1517 who was the first Ottoman Caliph & assumed the
humble title of Khadmain ul Haramain Shareefain (Servant of the Two Holy Mosques).
In this thread the word “Porte” refers to the Ottoman government. It’s actually a reference to the
title of “Sublime Porte” which was given to the Great Ottoman government by Venetian Ambassador
Andrea Gritti in 1517 during Sultan-Caliph Sulayman’s rule when the Ottoman state was at its peak.

The Arabic-speaking populations of the Ottoman state occupied more than half of the empire’s
landmass, but they did not form a conscious nationality but rather identified by religion. Ottoman
officials never defined the various provinces where Arabic speakers dwelled as constituting a distinct
ethnic or religious community.

They used the word “Arab” to denote the Bedouins of the Arabian Peninsula and the Arabic-
speaking Muslim population of the western arm of the Fertile Crescent. The Porte thought in terms of religious identity rather than language, & the loyalty of the Ottoman Sultan’s Arabic-speaking
subjects was based on the Ummah.

Arab loyalty to the Ottoman sultan as Caliph was conditioned on rule according to Sharia &
protection of the Holy Cities and the greater Islamic realms from Christian infidels & Shiʽite heretics.
Ottoman Sultans understood these conditions, so they did ostentatiously publicise their victories
over Christians and Shiʽites.

Ottomans successfully administered the diverse Arab provinces by adapting to traditional, local
institutions & providing security. The Porte sent to the Arab provinces officials who were products of
the Topkapı or the madrassas of Istanbul. The Professional Ottoman governors were almost
invariably Balkan or Anatolian who spoke Turkish & had been trained at Topkapı.

In ruling through local institutions, the Porte made evermore use of the local elites in the Arab
provinces to collect taxes & keep order. From the early 17th century, Ottoman officials used the
Arabic word ayan to describe the men who bid on tax contracts and maintained order in the cities.

These notables ran society in the cities and countryside down to the end of Ottoman rule. They
formed the ruling council of the city, patronized guilds, engaged in moneylending, & dominated local
and regional trade.

Over the course of the 17th century, an alliance emerged between the professional Ottoman
governors, officials, & Janissaries sent from the capital with the town notables and council to
administer the cities of the Arabic provinces. These consortia of local power brokers were immensely
successful in maintaining order in the Arab provinces.

The Porte tolerated a certain measure of disorder along the desert frontiers as long as taxes were
paid and the Hajj to Mecca, was not threatened. In the rugged Amanus region, for example,
Ottoman officials granted titles & subsidies to achieve a balance among the warring Druse, Shiʽite, &
Christian tribes.

In governing the Holy Cities of the Hejaz, the Porte showed utmost discretion & respect to Islamic
traditions. Since the 10th century, a member of the Hashemite clan, claiming descent from the
Prophet, held the offices of the Sharif and emir of the two Holy Cities.

The Porte invested rank and titles to each Hashemite Sharif whose standing and legitimacy among
his fellow tribesmen was increased. The Ottoman governer of Hejaz took seat in Jeddah instead of
Mecca or Medinah to show respect to House of Sharif.

Morever many tax exemptions were given to the population of Hejaz. Aside from customs collected
in Jeddah, the inhabitants of the Hejaz did not pay taxes to the state. They were supported by the
personal wealth of the Ottoman Caliph and by Vakf (charity) properties.

The Ottoman state, as custodian of Mecca and Medina, was supposed to provide safe passage for all
pilgrims travelling to the Holy Cities. However, political alliances & conflicts shaped the routes that
were opened or closed.

There is no record of a ruling Sultan visiting Mecca during the Hajj but as per primary records,
Ottoman Princes were sent to make the pilgrimage or visit the Holy Cities during the year. The fear
of coup or unrest during Sultan’s absence, was likely the main factor that prevented Sultans from
travelling to the Hijaz.

The role of Amir al-hajj was continued by the Ottomans when they gained control over the Hejaz in
1517. Besides the latter year, during which the Ottoman sultan appointed a bureaucrat to the post,
the umara’ al-hajj from Cairo for much of the 16th century continued to come from the ranks of
Circassian Mamluks or important Arab Sheikh’s.

The trade caravan under the Amir Al Hajj was a procession which took the Kiswa (the ceremonial
cover of Kabah) along with some gifts for the inhabitants of Holy Cities from Damascus or Egypt as asymbol of the Sultan as the maintainer of Hajj pilgrimage thus validating his rule.

So overall the Ottoman rulers for around 400 years ruled the Arabs with fairness & respect by
honoring the Arab culture and language. There was no attempt made to Turkify Arabs or
discriminate them, rather they were always first class citizens as members of Ummah. Professor
Kenneth W Harl states that there was little serious opposition to Ottoman rule in Arab provinces
until 19th century.

So now the million dollar question is that what went wrong in the 19th century? To understand this
we have to understand that the Ottoman government was hijacked by the Committee of Union and
Progress which ousted Sultan AbdulHamid II and started to Turkify Arabs which caused problems.

The Committee of Union and Progress was launched and run by the Dönmehs (crypto-Jews) of
Thessalonika in Ottoman Greece. They ousted Sultan AbdulHamid II in 1909 since he refused the
establishment of any Jewish state in Palestine. The CUP/Young Turks pressurised the Sultan but he
didn’t budge so finally they launched a Coup.

Who did the Young Turk and the Unionists who made a coup on Abdulhamid serve?
Quotes of foreigners have been selected so that others don’t accuse that this is a just conspiracy of
Islamic bigots etc. Now let’s read!

On this subject, Webster’s book says:
“The Young Turk movement was initiated by the Masonic lodges in Salonica, under the direction of
the Italian Constitutional authority. [1] On the other hand, Friedrich Wichtl writes that in the 1900s, the French Mashriki chief decided that
Sultan Abdulhamid should be overthrown and turned the developing Young Turk movement in this
direction. [2]

Another writer said, “We can definitely say that the Turkish Revolution is almost entirely a Mason-
Jewish conspiracy.” he says. [3]

A very important authority on the Middle East such as RW Seton-Watson states the following on this
issue:
“The real minds of the movement were Jews or Jewish-Muslims (Sabethaiists.)” They were funded by
the wealthy converts and Jews of Thessaloniki, from the international capitalists of Vienna,
Budapest, Berlin (and increasingly, perhaps Paris and London). [4] Emmanuel Karasu Efendi, who was the Master of Macedonia Risorta and suggested the Young Turks
to meet in Masonic lodges, later became one of the leaders of the Union and Progress, and joined
the delegation in 1909 to inform Sultan Abdulhamid II that he was deposed. had done.

Like other Jewish MPs, he paid attention to behaving as Turks in the Parliament. This was the
traditional attitude of Turkish Jews and apparently Karasu Efendi did not neglect to fill his pockets
like many other Turks at that time. [5] We come across the following information in another source:
“The youth movement was getting more and more powerful, especially with the young officers in
Macedonia. They supported the society called Ittihad ve Terakki with money, especially the rich
people of Thessaloniki, especially the Dönmeler. ” [6] RESOURCES:
[1] Nesta H. Webster, Secret Societies and Subversive Movements, London, Boswell 1928, page 284.
[2] Friedrich Wichtl, Weltfreimaurerei, Weltrevolution, Weltrepublik, Eine Untersuchung über
Ursprung und Endziele des Weltkrieges, (World Freemasonry: The World Revolution: A Study of the
Origin and Goals of the World War) 2nd edition, JF Lehmanns Verlag, Munich 1920 page 105.
[3] The Cause of World Unrest, With an Introduction by the Editor of “The Morning Post”, London
1920, p. 143.
[4] RW Seton-Watson, The Rise of Nationality in The Balkans, London 1917, Constable, p. 134, 135.
[5] Henry Wickham Steed, Through Thirty Years 1892 – 1922, Garden City, NY 1925, vol 1, pages 375,
376.
[6] Lazslo Rasonyi, Turkishness in History, Ankara 1971, page 252.

This information of the CUP/Young Turks being a Masonic coup is also confirmed by some Arab
historians who also agree that Ottoman Sultans never tried to Turkify the Arabs until the Committee
of Union and Progress hijacked the government and discriminated Arabs while allowing Jews to
settle on Palestine.

Syrian historian al-Husri stated in his works that the Arabs saw the rule of the Ottoman sultans as a
direct continuation of the Islamic caliphate and did not feel themselves as a people conquered by
and subjugated by a foreign power. (al-Husri, al-Biladu’l-Arabiyya ve’d-Devletü’l-Osmaniyye, Beirut
1960, pages 36, 82, 83.)
Arab historian Zeyn N. Zeyn stated that the Ottomans never colonised Arabs, they fought the
Mamluks, the Spaniards and the Persians, but they did not fight the Arabs. According to the same
author, the Ottomans made no attempt to assimilate and Turkify the Arabs until the Young Turks
came to power. (The Emergence of Arab Nationalism, Beirut 1966, pages 9, 10, 17.)

So how after understanding the reality of Young Turks how can we attribute their crimes upon the
Ottoman Sultans who ruled Arabs with Justice and Respect for around 400 years? That is surely a
horrible distortion of history and dishonesty since the Young Turks were worst enemies of Ottoman
Sultans.
Another point here is that most Arabs wanted autonomy but didn’t want to leave the fold of
Ottoman state. They were against the actions of the CUP/Young Turks but not against the Ottoman
state itself. This can be understood since most Arabs in Palestine, Egypt, Libya, Jordan, and Lebanon
fought alongside the Ottomans against British and allies.

Pictorial proofs showing that Ottoman Turks and Arabs stood shoulder to shoulder in the ranks of
Jihad against British in Palestine, Libya, Syria and elsewhere. How can this reality of the past be
ignored? https://t.co/G7GcEn4uFV