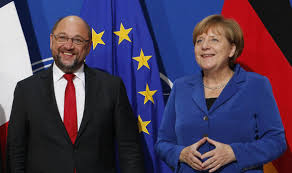 Angela Merkel was presented by some  as the new leader of the west after Donald Trump won the presidential elections in the United States. However, the failed coalition efforts of Merkel since the September 24th elections showed, she may not even pull together her country let alone the whole west. During these crucial times of Europe, German parties seem not able to put aside their party interests for the benefit of the country. Could the prolonged coaltion efforts mean a bigger crack in the German unity?
Veteran politician, former Foreign Minister of Germany, Frank Walter Steinmeier certainly knows how much not being able to form a government can tarnish Germany’s image in the international arena, or even being have to call for a snap elections which is admitting that the country is unable to govern. That is why Steinmeier stepped in after the so-called Jamaica coalition talks falied. Angela Merkel was in favor of a  snap vote but the president put pressure on Merkel and SDP leader Martin Schulz to start a new round of talks. Schulz who ruled out being part of any coalition government right after the elections had to bow. He joined Merkel at the presidential palace on Thursday but did not refrain from saying it did not mean unconditional green light for a Grand coalition.
Meanwhile, German media played down the fact the political spectrum was so divided when many crucial issues await Germany.  One Deutcshe Welle reporter said during a live broadcast that Parliamentary systems always have coalitions unlike the US system where the winner takes it all. But that is not merely the case. In Parlamentary democtracies, if one party is strong enough to secure an absolute majority, no coalition is necessary. One perfect case fort his is Turkey, ruled by the single-party government for over 12 years.
German media reporting that forming a new government could be as late as March if successful. Calling for a snap elections is a risky move because it could mean more votes fort he German far right party AFD. German public may have sensed incompitency towards the leading parties and that could trigger another vote hike for AFD who argues Islam has no place in Germany. Stronger AFD could mean more division for Germany. Knowing all these, CDU and SDP and other politically centered parties still fight for their own interests. SPD leader Shulz accused Merkel’s CDU for planting fake news in the media to weaken their hands. When fake news argument enters a country, one can not help but to remember Trump’s (Dis)United states.