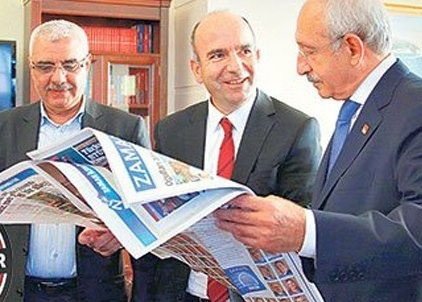 We witnessed resumption of FETO’s so-called graft probe attempted in December 17-25 2013 last week. Zarrab trial, currently conducted in New York, which is maintained with illegal wiretapes and documents, whose judges and prosecutors were bribed by FETO, and in which FETO members testify, aims to reach President Erdogan by jumping on defendants. Similtaneously,  one day before the trial started, CHP leader Kemal Kilicdaroglu accused Erdogan’s relavives of transferring money illegally to an off-share bank based in Man Islands.

However,  FETO, CHP, and their foreign comrades looks disappointed with ongoing trial. One of them reflected his surprise by saying ; “There should have been an uprising till now. Nobody cares what is going on”. Nevertheless, there was nothing to cause outrage among people since people knew well that Zarrab case is a theatre which is played to find a way to punish President Erdogan. Yet, it could not prove that Erdogan involved in corruption.

Actually, there was a cry of joy when Zarrab said “I heard from someone that Erdogan ordered Ziraat and Vakif banks to mediate for Iranian trading”. They thought such revelations could sink Turkish economy, and in the end,  Erdogan will leave the power. Do you see what makes them happy? Erdogan just prioritized his country’s interests to those of USA. But  opposition groups behave like American citizens.

Awaiting for a change in government from the result of Zarrab case is utmost stupidity. First of all, they are not aware that the people they belittle are aware of heinous plan. Second, Turkish people don’t trust America which supported coup attempt and arms PKK’s Syria branch, YPG or with masked name SDF. Third, since FETO is the perpetrator of the failed coup,  and transferred billions that they got by force to off-shore banks, nobody believes that the case is carried out in a honest manner.  People never tolerate thieves to blame someone for being a thief. Fourth, Kilicdaroglu’s allegations are ineffective as people don’t trust him, either.

If what you do contradicts with what you say, you will loose people’s trust. Even if FETO or Kemal Kilicdaroglu discloses real documents proving corruption one day in the future, they will not be influential since people don’t believe them. When a problem is stated by problematic guy, the problem looses its impact. It is obvious that opposition groups can not convince people because of distrust to them.

On the other hand, President Erdogan has already gained public confidence. People gave him unlimited credit that when he is exposed to a accusation, they first look at who are accusing him and determine their position as per accuser’s ID. Current situation is so much in favor of Erdogan that any opposition attack becomes counter-productive. So, the President does not spend much effort to defend himself.

However, this doesn’t mean that bureaucrats and ministers that got bribed should be forgiven since opposing groups brought it the agenda. When outer attacks are over, the first thing to do is to call corrupt guys to the account. Otherwise, people will begin to question honesty of government, too.