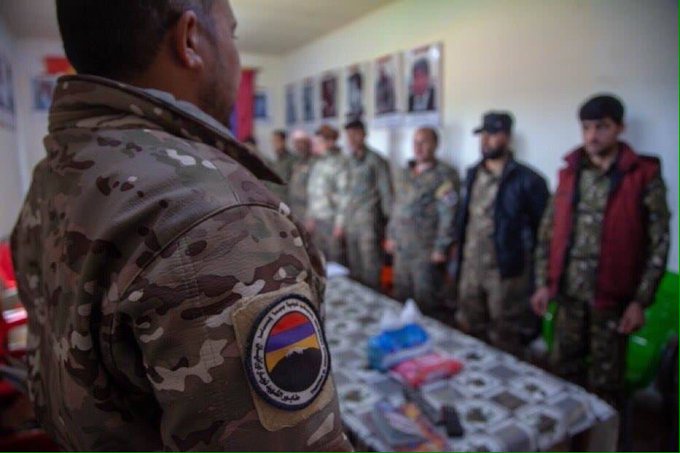 ANKARA – The PKK and YPG terrorists have been transported to occupied Karabakh and are fighting alongside Armenian forces against Azerbaijan, latest reports have confirmed.

Armenia has reportedly struck a deal with PKK and YPG in July this year under which nearly 300 of terrorists have been transported to Karabakh.

PKK is a terror-designated group by US, EU and Turkey and has killed over 40,000 Turkish civilians and soldiers since 1980.

YPG is a Syrian affiliate of the PKK.

Commenting on the PKK joining Armenia against Azerbaijan, public commentator from US Michael Doran tweeted: “The YPG of Syria – which the US trained & equipped – is reportedly fighting Azerbaijan, Turkey’s ally, in support of Armenia/Russia/Iran. Just another reminder that under Obama the US allied with the YPG, a Russian-Iranian proxy, hostile to Turkey, which is America’s ally. Dumb?”

Turkey has repeatedly called on US to withdraw its covert support to the terror group. Besides, Iran and Russia too have been seen cozying up to the group which has irked Ankara.

Earlier, many reports were circulating that the PKK terrorists were transported in trucks and buses to Armenia through Iran.

On Sunday, Armenian forces launched attacks from occupied territories on civilian population of Azerbaijan and its military.

Baku repelled the attacks, inflicting massive damages on Armenian military and its soldiers.

The largest Muslim bloc – Organization of Islamic Cooperation (OIC) – on Monday also put its weight behind Azerbaijan on Monday calling out Armenia for its aggression against the Muslim-majority nation.

In a hard-hitting statement released on twitter, the OIC demanded Armenia vacate the occupied territories which belong to Azerbaijan.

“OIC calls for full and unconditional withdrawal of Armenian forces from the occupied Azeri (Azerbaijan) territories and for dialogue to reach a political solution to the conflict between the two countries based on respect for the sovereignty and territorial integrity of the Republic of Azerbaijan,” the OIC said, expressing deep concern regarding the aggression by Armenia against Azerbaijan.

The demand from OIC, body of 57 Muslim-majority nations, came after Turkey’s President Recep Tayyip Erdogan early on Monday called on Armenia to immediately end the occupation of Azerbaijani territories, so the peace will reign in the region again.

“The crisis in the region that started with the occupation of Upper Karabakh must be put to an end,” Erdogan told a symposium on international maritime law and Eastern Mediterranean at the Dolmabahce Office in Istanbul.

“Turkey continues to stand with the friendly and brotherly Azerbaijan with all its facilities and heart,” he added.

Relations between Azerbaijan and Armenia – the two former Soviet nations — have been tense since 1991, when the Armenian military occupied Upper Karabakh, an internationally recognized territory of Azerbaijan.

Four UN Security Council and two UN General Assembly resolutions as well as many international organizations demand the withdrawal of the occupying forces.

The OSCE Minsk Group – co-chaired by France, Russia, and the US – was formed in 1992 to find a peaceful solution to the conflict, but to no avail. A cease-fire, however, was agreed upon in 1994.

France, Russia, and NATO, among others, have urged an immediate halt to clashes in the occupied region.

“While the OIC strongly condemns repeated provocations and aggression by the military forces of the Republic of Armenia, it renews its solidarity with the Republic of Azerbaijan and recalls the relevant resolutions and decisions of the OIC and the United Nations Security Council,” said the Muslim bloc.

Tehran is yet to make its position clear on the Karabakh issue which has international backing siding with Baku.

Instead of calling out Armenia to stop aggression and vacate the illegally occupied territories which belong to Baku, Iran chose to stress on maintaining status quo.

“Iran is closely monitoring the alarming violence in Nagorno-Karabakh. We call for an immediate end to hostilities and urge dialogue to resolve differences. Our neighbors are our priority and we are ready to provide good offices to enable talks. Our region needs peace now,” Iran’s Foreign Minister Javad Zarif tweeted.

His statement invited Iranian regime backlash as Tehran was criticized for its destabilizing role in the region.

“Iran means a huge frustration. They have never mislead us so far. Your foreign politics are based on what TR (Turkey) does not want to see in this region indeed. You supported Assad regime, PKK and YPG have time to time been supported also. Now, Armenia is better than Azerbaijan for you,” tweeted one social media user Engin Tarhan.

Turkey has said it is ready to help Azerbaijan “fully take back its occupied lands” of Nagorno-Karabakh from Armenia.

Who supports whom in Armenian-Azerbaijani clashes?
Bayraktar TB2 changes the course of war in favor of Azerbaijan