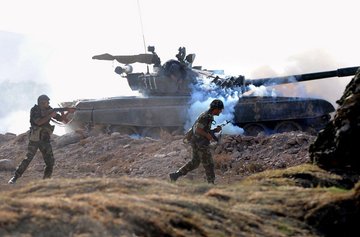 ANKARA – Azerbaijan on Sunday vowed to safeguard its territorial integrity after Armenia launched military attacks on civilian population and military posts of Azerbaijan.

Azerbaijan military is said to have lost a helicopter but is yet to be confirmed.

Calling out Armenia for “illegally settling Karabagh”, Aliyev said: “we will defend our lands as Karabagh belongs to Azerbaijan.”

“Units of the Azerbaijan Army are fighting for important heights located under the occupation of Armenian troops in the Tartar-Aghdam, Fuzuli-Jabrayil directions, and in the direction of Murovdag Mountain,” Azerbaijan’s defense ministry added.

“Rocket and artillery troops and aviation assets strike at enemy command posts, destroying a large number of maneuvering forces, military equipment, and military facilities. Fierce battles are taking place along the entire length of the front,” the ministry said.

Journalist and Researcher Levent Kemal claimed in his Twitter posts that Russia has sent military advisers, military equipment and mercenaries to Armenia in past few days.

“So, this is new front for Turkey and Russia,” he said.

Turkey and Russia are involved in Syrian and Libyan crisis with both sides have military presence in the war-torn countries, supporting the opposite sides.

Today’s attacks by Armenia is continuation of its aggression on Azerbaijan’s lands. Armenia illegally occupies Nagorno-Karabakh of Azerbaijan.

Armenians have killed hundreds of Azerbaijani civilians during the occupation, known as Hodjali massacre.

There are resolutions by UN Security Council calling on Armenia to vacate the occupied lands but Armenia has refused to oblige the international law, so far.

Turkey recently moved its some military units to Azerbaijan after Armenia launched attacks from occupied areas.

The militaries of Turkey and Azerbaijan held joint drills.

“In the last three days, more Russian military advisors and equipment were transferred to Armenia for military support. Armenia’s attack came after this process,” Kemal said.

Extending support to Baku, Turkey said: “We strongly condemn the Armenian attack which is a clear violation of international law and caused civilian casualties.”

“Turkey will stand with Azerbaijan by all means,” Turkey’s Foreign Ministry said. “Baku has the right of self-defense to protect its people and territory.”

“With this, Armenia once again proved that it is the biggest obstacle to peace and stability in the region,” Ankara said.

Furthering its aggression on Azerbaijani lands, Armenian Prime Minister Nikol Pashinyan said in a tweet: “At the decision of the Government, martial law and general mobilization is being declared in the Republic of Armenia. I call on the personnel attached to the troops to present themselves to their district commissariats. For the fatherland, for victory.”

However, Azerbaijan said there is “no need for total military mobilization over Nagorno-Karabakh since its army is fully staffed”.