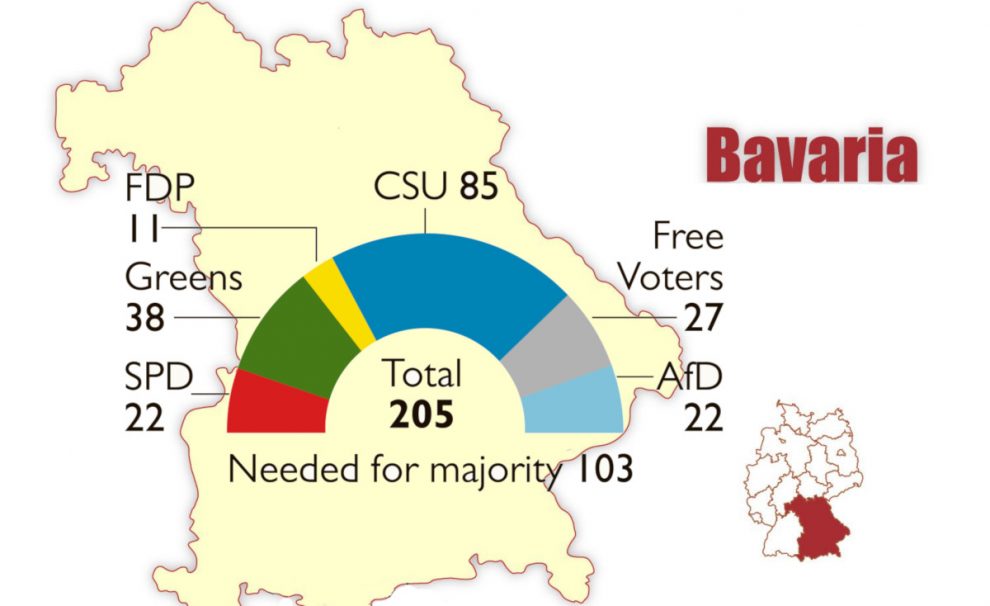 It is a further erosion of Germany’s political mainstream. Former major party SPD got only 9,7 % of the votes. CSU suffered their worst election result since 1950 and is now considered to be a major party in transition.

This election indeed marks a crisis of major parties. Minor parties as the Greens (17,5 %) and Free Voters (11,6 %)  are benefiting from the crisis of the major party.

Free Voters have won votes where CSU has lost them. Free Voters are strong in the countryside. They were established in communities and villages as secessions of the CSU. Free Voters became CSU’s most likely coalition party.

The outcome of Bavaria state elections shows a trend for Germany. Germany’s whole party system is under way to become more influenced by minor parties.

Bavaria election is also a further shift to the far-right. The far-right is pleased about 21,8 % as both right-wing parties Free Voters got and AFD  of the votes.

Economically the outcome will not affect Turkey because both Bavaria and Germany are still interested in growing trade relations and direct investments between the countries.

But refugee politics in Germany might become more difficult because AFD and Free Voters are both for restrictions against migration.

Also religions and foreigners politics may become more difficult because AFD wants to restrict the rights of Muslims in Bavaria state as well as in whole Germany.

Merkel’s position is considerably weakened by the outcome of this election. Voters had lost trust in both Bavarian State government and in Merkel’s federal government.

How did the Greens become successful in Bavaria?

The Greens are the big winner in Bavaria election. The Greens come second after CSU.

The Greens have started as left-wing oriented in the late 70s and 80s, they became more central oriented in the 90s and liberal in the late 90s. Now they are even partly conservative. In March 2011 (two weeks after the Fukushima nuclear disaster had begun), the Greens made large gains in the states of Rhineland-Palatinate and in Baden-Württemberg. In Baden-Württemberg they became the senior partner in a governing coalition for the first time. Since 2011, Winfried Kretschmann is the first Green to serve as Minister-President of a German State. The Greens of Bavaria are mostly central oriented.

At the ballot box in Bavaria,

2) the Greens were benefiting from their protest agains the new Bavarian police task act. In May, Bavaria’s state legislature passed a controversial law expanding police powers in Bavaria. Citizens now can be arrested for three months without the verdict of a judge. Greens attacked the bill as draconian and warned it could become a blueprint for expanded police powers across Germany. Greens were among the organizers of biggest Munich protest in years against this hard-line CSU police bill.

3) the Greens were benefiting from their ecologist campaigns against nuclear power energy and against impervious surfaces.