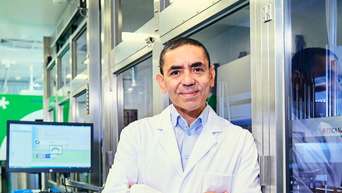 Ugur Sahin, one of the most respected scientists in the world, said Turkey’s health system is perfect as several developed countries struggle to cope with the burden of the second coronavirus wave.

Acclaimed for his company BioNTech’s coronavirus vaccine success, Ugur Sahin and his wife Ozlem Tureci have been at the forefront of the world stage. BioNTech was the first company in the world to announce success in vaccine development. German Chancellor Angela Merkel has last week hailed the Turkish-German couple as well for their success.

Ugur Sahin has spoken to the Turkish daily Hurriyet on Tursday.  He said that the medical schools in Turkey are at a perfect level and Turkey’s health system runs perfectly. Turkey has been smeared by the German media about its coronavirus fight. Turkish health minister’s choice of coronavirus treatment has also been several times criticized by the western media. One of the most respected scientists and the developer of Coronavirus vaccine, Sahin’s statement has just refuted the negative allegations about Turkish health system.

Sahin also said during the interview that he has been getting extra motivation with the fact that Turks around the world have been honored by his success. “That is also a huge responsibility,” Sahin said. He also pointed out that Turkey would sign a contract with his company before the end of the year and the delivery of the vaccine would start soon after.

Ugur Sahin also held a press conference on Tuesday during which he said said that he is “confident” the BioNTech/Pfizer vaccine will work against a new, more contagious mutation of the coronavirus found recently in the U.K. He added, the companies are conducting tests to be sure and will aim to have results published in about two weeks.