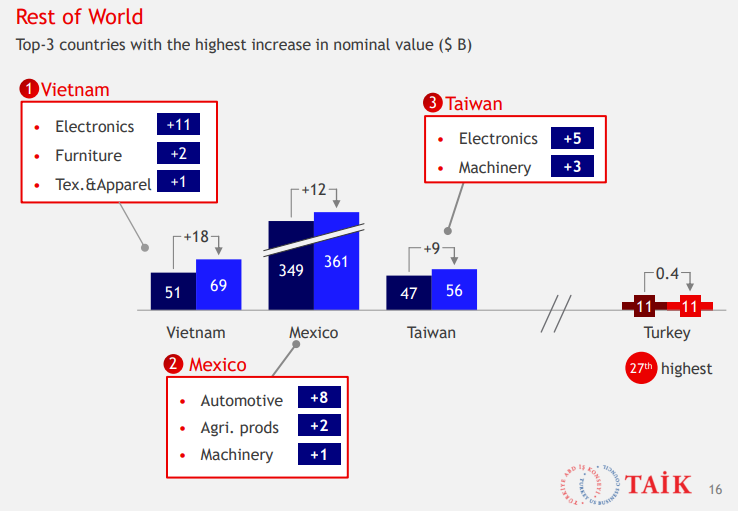 A projected sharp reduction in trade between the United States and China in the next two years coupled with moves to diversify supply chains potentially position Turkey alongside Vietnam, Mexico, Taiwan and Poland as competitors in efforts to reduce dependency on the People’s Republic, according to a just published study.

The study, conducted by the Boston Consulting Group on behalf of the Turkey-US Business Council (TAIK), suggests that Turkey, located on a fault line that separates Europe from Asia, has prerequisites to emerge as a winner provided it invests in its digital, electronics and equipment sectors.

TAIK is an affiliate of the Foreign Economic Relations Board of Turkey (DEIK), the country’s oldest and largest business association.

The study identifies Africa as one region where the US and Turkish firms bring complimentary assets to the table. Turkey has in recent years significantly expanded its diplomatic, political, military, and economic footprint in Africa.

Africa is also a continent where China has made major inroads and could emerge as the dominant player, particularly in countries like Egypt that risk economic collapse.

Issued weeks before US President-elect Joe Biden is scheduled to take office, the study appears intended to underline Turkey’s strategic importance at a time that the country’s relations with the US and the European Union are strained.

The US recently slapped Turkey with sanctions for acquiring Russia’s S-400 anti-missile defense system while the EU imposed penalties in response to controversial Turkish gas drillings in the Eastern Mediterranean.

Increasing Turkey’s relevance to global trade flows would serve various Turkish objectives: boosting the country’s economy imperiled by the pandemic, the global economic downturn, and structural problems as well as capitalizing on recent geopolitical victories garnered through its military intervention in Libya, its support for Azerbaijan in this fall’s Caucasus war against Armenia, and the demonstrated capabilities of its homemade hardware, particularly drones.

To improve its chances of becoming a key alternate supply chain node, Turkey has sought to polish its tarnished image as a disruptive force by attempting to improve strained relations with two other key regional players, Saudi Arabia and Israel, and pressuring Iran – moves that would please Europe as well as Mr. Biden.

Finally, becoming a major alternative to Chinese-controlled supply chains furthers Turkey’s ambition to exploit something of a power void because of diminished US regional engagement to carve out its own place in a world in which power is being rebalanced as a result of big power rivalry.

Predicting that US-China trade would drop by up to US$200 billion in the next two years, the study suggested that Turkey could significantly enhance its relevance to the global economy by leveraging its industrial base to exploit underutilized potential in data and software services and technology start-ups; and invest in cutting edge electronics and equipment manufacturing in areas such as smart cities, the Internet of Things, and automation.

The study warned that countries like Vietnam, Taiwan and Mexico have so far proven more adept than Turkey at exploiting emerging opportunities. It said the three countries this year boosted their electronics, automotive, and/or agricultural sectors by up to 11 percent.

TAIK’s lobbying agent, Mercury Public Affairs, distributed the study to US policy and opinionmakers, in an effort to change Washington perceptions of Turkey and its assertive president, Recep Tayyip Erdogan.

DEIK, the Turkish business association, together with TAIK, last week organized a webinar to highlight contributions of frontline personnel in the fight against COVID-19 who have either Turkish roots or links to Turkey’s allies.

TAIK, backed by Mr. Erdogan, kicked off its campaign to reposition Turkey with a webinar in June, entitled ‘A Time for Allies to be Allies: Turkish American Global Supply Chain,’ that was addressed by influential US Republican Senator Lindsey Graham, a close ally of outgoing President Donald J. Trump.

Mr. Graham acknowledged Turkey’s importance, noting that going forward Turkey’s relationship with the United States was likely to be grounded in economic integration through a free trade agreement.

He predicted that Africa would be “the prize of the 21st century” and said that he hoped that the United States and its allies rather than China would be the continent’s infrastructure and technology provider.

Mr. Graham cautioned, however, that Turkey’s S-400 acquisition, the resulting US cancellation of the sale to Turkey of advanced F-35 fighter jets, and Turkey’s military intervention in northern Syria were the greatest impediments to Turkey achieving its goal of becoming a key node in reconfigured US supply chains.

Mr. Erdogan may see his geopolitical successes and attempts at rapprochement with Saudi Arabia and Israel as confidence-inspiring but that is unlikely how either side of the Washington divide will perceive them.

Meanwhile, Turkey’s supply chain competitors appear to be gaining a head start even if the United States recently branded Vietnam a currency manipulator.

Mr. Erdogan has so far given little indication that he is willing to budge on Syria or risk his already complex relationship with Russia by backtracking on the S-400.

Describing differences with the US and the EU as “artificial agendas,” Mr. Erdogan this week told his Justice and Development Party’s members of parliament that “Turkey is facing double standards both over the eastern Mediterranean and the S-400s. We want to turn a new page with the EU and United States in the new year.”

The Turkish president appears to be gambling on the Biden administration prioritizing the reduction of dependency on China by adopting policies that are, in the words of international affairs scholar Aaron L. Friedberg, “at least partially insulated from day-to-day political pressures.” That could prove to be a risky bet.