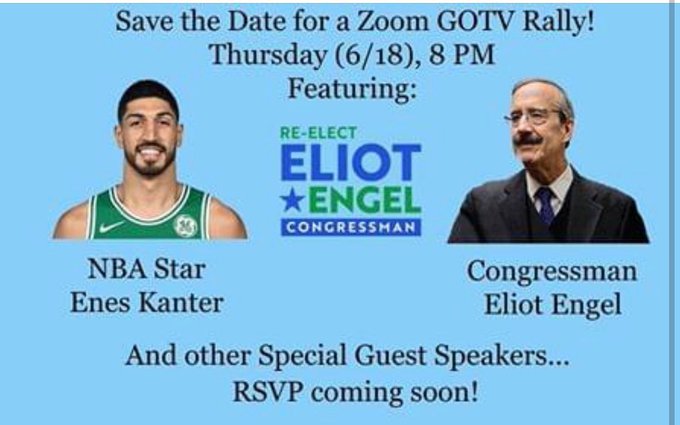 Jamaal Bowman, an Afro-American middle school principal , has ousted Rep. Eliot Engel — the top Democrat on the House Foreign Affairs Committee — in the New York primary. Pro-Israel groups,  top Democrats like Hillary Clinton and Nancy Pelosi and even some Republican groups had scrambled to save Eliot Engel, who is known for his staunch support to Israel, but all their efforts failed. While Bowman was promising to fight poverty, racism, sexism and unjustice, the scope of Engel’s narrative was high-politics like supporting Israel.

We celebrate this movement — a movement designed to push back against a system that’s literally killing us.

It’s killing Black and brown bodies disproportionately — but it’s killing all of us: mentally, psychologically, and spiritually. #NY16 pic.twitter.com/61mB2yGvev

Eliot Engel, a Jewish-origin politician, is also known for his support to FETO, a terrorist group that attempted a coup in Turkey in July 16, 2016.  Engel and Enes Kanter, a NBA player as well as a FETO member, had met last week for the former’s election compaigns. Turkish audience interpreted Engel’s defeat as a slap to faces of FETO members and congratulated Bowman for his victory.

I guess this endorsement makes sense. Neither of them know how to play defense. pic.twitter.com/7qi9Dj1yWO