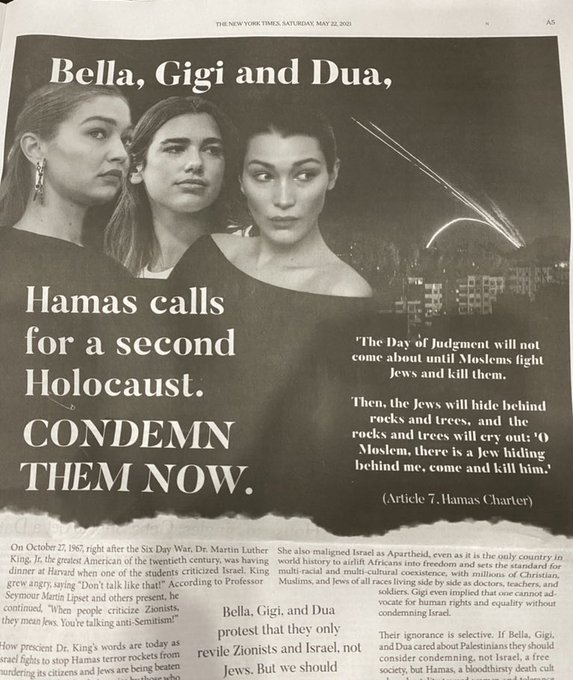 #BoycottNewYorkTimes is trending on social media after the US-based newspaper published a controversial advertisement on Saturday.

“I utterly reject the false and appalling allegations that were published today [Saturday] in the New York Times advertisement taken out by the World Values Network,” said Dua Lipa, a popular Pop singer.

Pop singer Dua Lipa took to Twitter on Saturday to angrily denounce a full-page advertisement in the New York Times that accused her of being anti-Semitic.

Lipa along with models Bella and Gigi Hadid have been accused of being “mega-influencers” who “vilified the Jewish state” and “accused Israel of ethnic cleansing”.

The controversy erupted amid Israel, termed as ‘terror state’ by Turkey’s President Recep Tayyip Erdogan and resonated by people across the world, bombed besieged Gaza since May 10, 2021 killing 248 Palestinians, including 66 children and 39 women, and injured more than 1,900 others. Health authorities in the West Bank have separately confirmed 31 killed in that region, totaling 279 across all Palestinian territories. A ceasefire came in effect last early Friday.

“This is the price you pay for defending Palestinian human rights against an Israeli government hose actions in Palestine both Human Rights Watch d the Israeli human rights group B’Tselem accuse of persecution and discrimination,” Lipa added.

She added that her stance remains that everyone be it Christian, Muslim or a Jew has a “right to live peace as equal citizens of a state they choose”.

The New York Times is facing a massive boycott campaign for placing the advertisement in its Saturday edition. The US-based daily is also accused of manipulating coverage of the bombing of Gaza by Israeli.

I stopped reading @nytimes 20 years ago. If you think it is an unbiased source of news and analysis, you should see now they are not. #BoycottNewYorkTimes pic.twitter.com/P53t9L8ead

Social media users accuse the New York Times of being biased source of news and analysis and many said they have ended their subscription of the newspaper for siding with the regimes accused of human rights violations and war crimes.