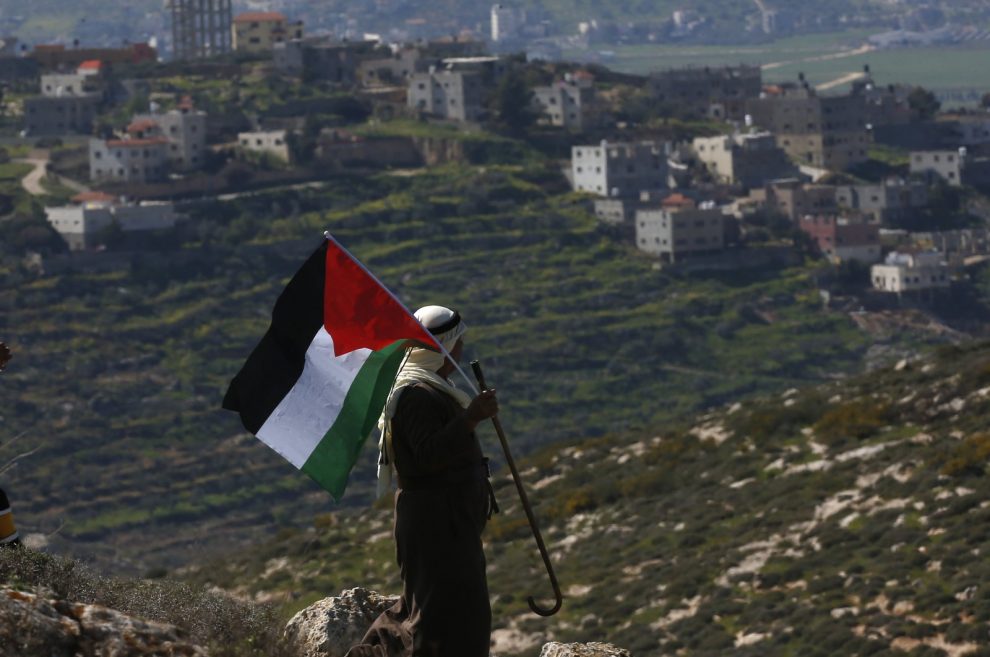 Why can’t Zionists be settled in their so called “historical land”?

Historically And Factually: almost each and every nation on the face earth is today standing on a patch of land where, in past, somebody else has been living and thriving. those who have not resisted or gave up, have either been replaced or mingled (either willingly or forcefully) with the settlers. in the ancient times (peaceful)migration has been witnessed and was not something likely to be repelled. the interesting case of DNA import of Indian subcontinent backed by DNA analysis reveals “a southward spread of genetic ancestry from the Eurasian steppe, correlating with the archaeologically known expansion of pastoralist sites from the steppe to Turan in the middle bronze age (2300-1500 BCE).” as quoted by Akhilesh Pillalamarri “around 5,000 years ago (3,000 BCE), india was on the verge of a major demographic transition, as new groups migrated to the subcontinent and mixed with the original inhabitants. the original inhabitants of the subcontinent, its aborigines, labeled by geneticists as ancient ancestral south Indians (aasi), lived throughout the subcontinent, but were soon to be partially assimilated into two demographic waves of farmers from the east and west: a larger group of middle eastern farmers expanding from what is now the northwestern part of the subcontinent, and a smaller group of southeast Asian farmers from the east, whose demographic impact was minor”. he goes on elucidating one important thing which extensively relates to today’s pseudo–new–india, “as DNA studies suggests, the original Neolithic Iranian farmer ancestry of the people of the Indus valley remained the primary genetic component of people from this region, but there is a significant steppe component layered onto it. this combined population has been labeled by geneticists ancestral north Indian (ani), a deliberate, politically-correct misnomer that obscures the non-Indic origins of these people”. another ferocious example is that of USA (an idol of west lovers and “merchant of democracy”) whose very foundation is laid on the resting place of  displaced/massacred indigenous people of that very region and this fact is not concealed from anyone. it is evident from the above discussion that people native to a place, centuries ago, may have been replaced or displaced but this was not the case vis-à-vis Jews living under the Islamic rule. in fact, golden age of Jewish culture was seen under the Islamic rule and Jews have literally flourished under the Islamic rule (ironically Palestinian Muslims have been killed, tortured, raped and displaced in a depopulation drive at par with colonial settlement policy of Zionists underneath British weaponry, funding and supervision to pave way for more radicalized and inhumane zionist settlements. and this barbarism continues till date). “Islam saved Jewry. this is an unpopular, discomforting claim in the modern world. but it is a historical truth. the argument for it is double” exclaims David j Wasserstein. they have experienced minimum restraint and maximum tolerance under Islamic empire. only Jews who indulged in conspiracies against Islam or deceivingly broke treaties were

exiled. Jews used to live peacefully and in harmony with contemporary Muslims before the British mandate in Palestine. Jews made up around six percent of the total population at that time and Muslims were in whopping majority. but now due to persistent war crimes, eviction drives and settler colonialism (which happens to be the first and foremost agenda of so called “state of israel” which is infanticide in nature) things have turned topsy turvy.

timeline of Jerusalem reveals that, Islamic rule over it lasted for about 12 centuries which exceeds any other rule. moreover, the first, historically recognized, settlement in Palestine was that of Canaanites who used to be polytheistic and obviously belonged to none of the Abrahamic religious divisions viz. Judaism, Christianity and Islam. these facts over rule the vindication of the misconception that “Jerusalem is the historical land of Jews”. moreover, for the sake of discussion if we take into account this (historically wrong) fact, still, where does the Zionists come into picture? they have no right on the land of Palestine as they never belonged to this holy land, simple and technical definition which fits onto them is “colonial settlers”! they belong to their countries of birth not here! Palestine is an inalienable historical land of Palestinians (be it Muslims, Jews or Christians who were born and raised there before the British mandate in Palestine or onset of zionist barbarism). consider a Muslim born and living in some part of globe being ascertained as a “natural” citizen of Saudi Arabia or so.?

So, the Palestinian land can never be transferred to Zionists due to the following facts:

In Terms Of Religion: let me make one thing clear to you as a crystal, Zionism and Judaism are insanely opposite! obviously, a person can be considered a real Jew if he/she is a true follower of Torah (just like a true Muslim is the one who wholly/truly follows Quran) not the one who picks up what works for his agenda/propaganda and denies the rest, otherwise he has no right in the light of truth and sanity to call himself a “Jew” (though he can be a zionist).but why Zionism and Judaism are opposite things? the answer lies in the fact that; it has been categorically stressed in

the holy texts of Jews and time and again admitted and advocated by immense number of rabbi that Torah followers cannot be nationalist (cannot create a nation of their own until their messiah arrives and settles them down). Zionists are literally hiding behind the Judaism and have been misusing it for their own agenda, which primarily includes expansionism by means of barbarism and crime against humanity!

rabbi yehoshua leib diskin, rabbi of brisk,lithuaniaand later rabbi of jerusalem (1817-1878) says “the greatest rabbis should gather immediately and excommunicate the zionists. they should exclude them from the jewish people by forbidding their bread, their wine and intermarriage with them. (mara d‟ara yisroel v. 2 p. 43)”

rabbi eliyahu chaim meisel,rabbi of lodz, poland (1821-1912) quotes: “any jew who throws a penny into the zionists‟ collection bag is like one who contributes a stone to the idol markulis, may g-d spare us. (ashrei ho‟ish p. 65)

the damage done by zionism and mizrachi in our country is inestimable… we must fear that if, g-d forbid, they succeed in capturing as many more souls as they have captured until now, most of the jewish people will become, g-d forbid, heretical. (hapeles)”