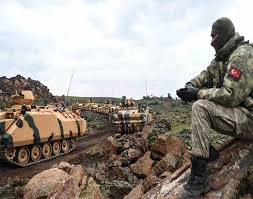 We have rocked with the utterly sad news of yet another despicable attack carried out by the bloody forces of the Assad regime and its allies late night that caused  the loss of at least 33 troops of Turkish Security Forces, dispatched for the sole aim of supporting existing observation points located Idlib and its veracity.

Russia, which is the most prominent country that has been unconditionally helping the regime, keeps its brutal position in Syria. After the incident, it has again made some weird explanations such as that they have supposedly not got any notice about the existence of the Turkish troops in the mentioned place where Turkish troops were attacked. It also said that Russia is ready to provide a ceasefire between the parties for the time being. What the Russian explanation means is not realistic and sincere for Turkey at this point. It must be well known that if Russia had been really a friendly country to Turkey , it would already have taken action much earlier and prevented such an attack and fully kept its promises given during the recent period in accordance with the Astana and Sochi processes.

There is no doubt that Assad regime will be heavily punished for the casualties of Turkish army in a matter of days but it seems that the relationship between Russia and Turkey will not be like before anymore and Turkey will have to review the whole existing deals and agreements either signed or to be signed with Russia in the upcoming months.

At this point, the million dollar question is how Nato will react against such an outrageous assault done against the second powerful member of the organization. Because, throughout our near history, it can not be said that Nato has given a good exam on the topic of proceeding its obligations stemming from article 4 and 5 of the treaty against Turkey. Unfortunately, we are again sure of seeing the similar moves from Nato after the emergency meeting to be held for this purpose.

Turkey is a very important country for both Europe and the United States in every aspect, so if Turkey is to be in a war, Europe will also have to endure the bitter results of this in a heaviest way. So far, Turkey has assumed a compensator role for the dire situation emerging from the Syrian Civil War by sheltering 3.7 million people fleeing country and prevented millions of those who wanted to go to the EU. But it seems that our European friends have still not understood and grasped the severity of the hard plight that Turkey has had on its shoulders.

According to the initial news, Turkey is now slated to open the western border gates for those wanting to reach to the European countries. Turkey should, have taken this step much earlier. By this way, Europe and the United States may perhaps see the situation in a clearer way and stop being indifferent to the conflict.

Whatever It Takes: Idlib
In how many slices do you want Syria?
Comment