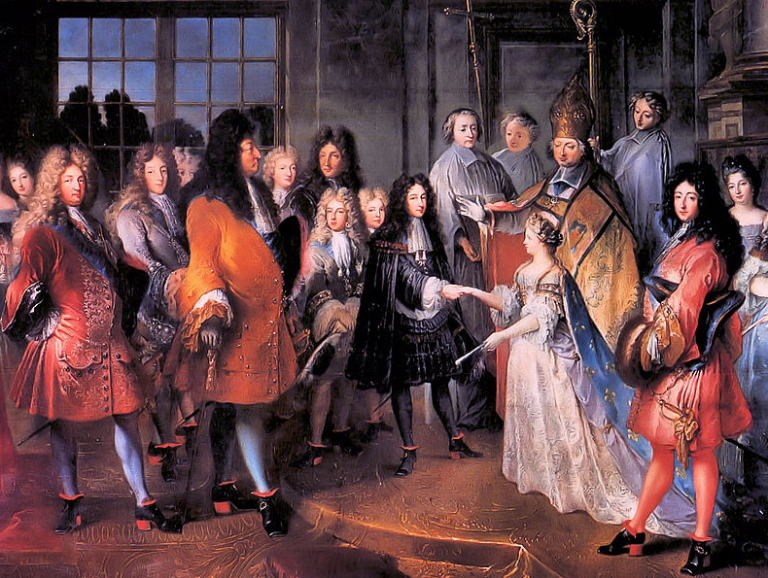 Historically, marriage has never been the ‘traditional’ union of a man and a women based on love and mutual respect for each other. More often than not, marriages were arranged with the good of the family in mind and not the happiness of the betrothed couple. This was especially so in the cases of marriage between children. The examination of depositions (witness statements) from petitions for annulment of a marriage made by children below the canonical age of consent in the Dioceses of Chester and York between 1450 and 1603 (I refer to this period as the sixteenth century as convenient shorthand for the longer period), reveal just why these marriages took place as well as the age at marriage of the parties. Unlike the forced child marriage we associate with less economically-developed economies today, wherein young girls are married off to much older men by their families for economic gain, the children in sixteenth-century child marriages in the north of England were not expected to conform to the expectations of adult marriage in anything other than marital status.

Canon law decreed that no child under the age of seven could contract a marriage, although clearly not all parents followed this directive. Above the age of seven, the contract could be made but the marriage would not be valid unless both parties consented to the marriage when they came to the age of consent. This was legally defined by the Church as twelve for girls and fourteen for boys. The age at which children were married varied but tended to be around nine, ten or eleven years old, and past the legal age for contracting a marriage. However, children as young as two were taken to church and helped to recite vows of future consent. Two-year-old Jane Brerton had to be carried to the church on her wedding day in 1552 and the words of matrimony spoken for her by an adult, whilst one three-year-old boy was given an apple by his uncle as a bribe to get him to the church.

Whilst marrying your child underage would not be an option in families where the match could not be of some advantage to one side or the other, there are some signposts in the depositions which point to the fact that not all children married in their minority came from wealthy or high status households. The occupations of the father or step-father of the children provide clues as to the social standing of the families involved; some clearly indicate that not all were wealthy, or at even families with land. One father is described as a shoemaker during divorce proceedings at York in 1556, whilst a step-father is noted as being an innkeeper in divorce proceedings in the same court in 1575. The vast majority of fathers, though – and indeed witnesses – cited in these depositions, came from ranks of some standing such as gentlemen, armiger, and merchant. However, the depositions reflect only those cases of child marriages that came before the Church courts. Litigation was expensive and it is possible that many underage marriages were dissolved by the couples simply not living as man and wife. Just because the lowest social groups are not represented in the depositions, we cannot take this as conclusive evidence that they did not subscribe to a specific child-rearing practice such as child marriage.

The reasons for child marriages are not always apparent from the depositions but many do state that it was at the instigation of the parents or that the children were ‘forced’ into the union. It is worth considering here that marriages had a practical aspect to them in the sixteenth century: parents sought to make a good marriage for their children and children were expected to accept their parents’ choice of marriage partner. It was, as Peter Rushton described, the ‘lynchpin of the family system’ around which the family elders of both parties placed vested interests. The happiness of the bride and groom took a back seat to safeguarding or advancing fortunes, protecting land and forging connections. When it came to child marriages, the most frequently mentioned reason in the depositions for these marriages taking place was formal or verbal agreements between parents or guardians involving land or money.

Borrowing money with a surety of a contract of marriage with a child who would eventually inherit property or land was one way to raise money for cash-strapped families. One couple, who brought a case for annulment before the church courts in Chester in 1567, were only married so that the father of the groom could raise enough money to buy a house. Others were married in lieu of payment of a debt whilst other marriages took place to protect the family from eviction. Thirteen-year-old John Bridge was one such child, married to save his father from paying back a bond in 1558. He stated that if he had not gone through with the marriage his family would have been ‘undone’.

Children were also married because one of the parties was deemed to offer the other a ‘good living’. However, this good living sometimes did not materialise. In 1547, four-year-old Elizabeth Hulse was married to seven-year-old George Hulse for that very reason but before they came to legal age, George had lost his inheritance and Elizabeth had filed for divorce. Marriage between step-children was also common (but technically illegal) to protect family assets and, as one mother put it, for the harmony of the household, notably the ‘perpetual agreement’ between her and her husband.

Often, one of the children went to live in their father-in-law’s house after the marriage, but this tended to be the youngest child regardless of gender. Once children were in the house, they were treated more as siblings rather than man and wife and were often referred to as ‘sister’ or ‘friend’. Sleeping arrangements were those of siblings – sharing a bed with another child or servant of the same sex – and none were expected to lie with their spouse until they came to the age of consent. This though, did not stop one of the parties from planning to entice their partner into their bed chamber. Thirteen-year-old Thomas Smith gave a farm labourer a penny to buy apples so that he could use them to persuade his wife to come to join him in his bed. Others took precautions to ensure that their partners did not join them. One boy who was married around the age of 12, would bar his door at night to keep his wife away, perhaps in an effort to prevent the marriage being formalised.

Marrying at such a young age presented challenges for the children involved and the depositions give some insight to their emotional responses and reactions. Whilst there are not always descriptions that can be classified specifically sixteenth- or twenty-first century emotions, there are descriptions of children ‘weeping openly’, which suggests unhappiness and fear. Twelve-year-old John Bridge who married to save his father from paying back a bond, had wept profusely to a neighbour on the day of his wedding. He had then wept to go home with his father the night of his wedding but his father refused to allow him to do so. Elizabeth Savell, who was married underage in 1509, found her relatives to be equally insensitive to her emotional state as John Bridge’s. When she refused to marry John Clay, her kinsman, Thomas Pek, slapped her across the face and made her cry.

Child marriage, like any other marriage, was an opportunity for a celebration. And whilst members of the community recognised that the parties in these marriages were very young by referring to them as ‘being then children’ when recounting the marriages, they still attended the church service and were able to recall the names of those present in addition to the total number of guests. The celebrations did not end at the church door and wedding feasts were common with witnesses either dining or serving at them. The manner in which the witnesses discussed the child marriages they attended suggests that the community identified the marriage as no different to marriages performed after the age of consent and therefore an acceptable practice in which to involve children from within the community.

Ultimately, no matter what the motive for the marriage had been, depositions largely demonstrate that children involved in underage marriages in the sixteenth-century were treated as any other child of their age, gender and social class. Boys were sent off to school after they were married and girls remained in their family home or that of their father-in-law or other male relative. Youthful exuberance and familial affection could be detected in the manner in which they dealt with each other. Robert Randle, who was married aged nine c. 1559, stated that he did not ever sleep with his wife Margaret after their marriage, but did admit that for fun he would jump from one bed to the next bed in which Margaret and a maid were sleeping. Clearly he viewed his wife as just another child in the house as these were the actions of a boy and not of a spouse.

The practice of child marriage as described above illuminates the larger topic of children and childrearing in sixteenth-century northern England. It emphasises the structure of society and families in a particular geographical area and within certain socioeconomic groups. Yet, due to a lack of research in this area in other regions of England during the same chronological period, we cannot conclude that child marriage was a northern phenomenon. What we can conclude is that parents married their children underage despite canonical stipulations, and the community regarded it as an accepted practice. Unlike the forced child marriages of today however, the practice of child marriage in sixteenth-century northern England did not necessarily diminish childhood experiences for those children involved. They continued with the activities expected of a child of their status with both the bride and groom treated according to their place in the life-cycle and not as a spouse expected to fulfil the obligations of adult marriage.

Loretta Dolan is a lecturer in the Graduate School of Education at the University of Western Australia (UWA), as well as an Honorary Research Fellow in the School of Humanities at the same university.