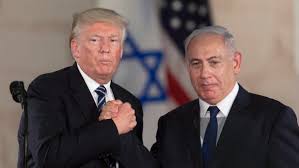 It looks like declaring the occupied Jerusalem the capital of the occupier did not work well for Trump. His sworn enemies, like The Washington Post and The New York Times, held their fire for two or three weeks, but the ensuing barrage of artillery made the pre-Jerusalem hostilities appear as cotton balls.

The “fire and fury” that marks the first anniversary of the U.S. president seems a harbinger of the end times, which would have been marked with lots of third-degree burn wounds. Mr. Trump is not going to be burned by the fire and fury of his best (and only) friend Benjamin Netanyahu, but will destroy many allies the U.S. has created since the 1940s.

President Recep Tayyip Erdoğan made the 2017’s last visit to Sudan, Chad and Tunisia in the last week of December. In Khartoum, Turkey and Sudan have agreed to establish a strategic cooperation council. It was a historic visit and at the end it was sealed with an equally historic agreement: The two countries agreed that Turkey would rebuild the island of Suakin (or Sawakin) in the Red Sea, and administer it as a historical relic of the Ottoman past.

Believed to be Ptolemy’s Port of Good Hope, the small island was conquered in 1517 by Ottoman Sultan Selim I, and it was used as the residence of the Ottoman Governor. When the Portuguese explorers discovered the sea route around Africa, the island and the Sudanese port next to it lost their importance. After the British occupation forces moved the new Sudanese port to the north, the island became virtually deserted. Once considered the height of medieval luxury, the old city built of coral is now in ruins.

Yet, President Erdoğan thought that it could be rebuilt as a tourist attraction and a stopover to the pilgrimage sites right across the Red Sea in Saudi Arabia, and his host Omar al-Bashir welcomed the idea. Last week the two countries agreed upon the development plan. Indeed, the revival of all-things Ottoman from the Palace dishes to Ottoman hookah (water pipe) could be used to create a touristic attraction at the island. The major television series in Turkey create tours to the old Ottoman capitals Bursa and Edirne within the country, and an Ottoman pasha’s dream island could provide Sudan with much needed tourist revenues.

No! As if it is not a development plan for a deserted island in a long forgotten port on the Red Sea, Saudi, Israeli and Emirates newspapers, television shows and social media are teeming with such conspiracy theories that would make Ian Fleming furious with jealousy. “Turks are going to build a military base there,” hawks a Saudi newspaper. You cannot even squeeze a heliport on it! Another United Arab Emirates (UAE) website informs us that now with it Turks are completing their encirclement of Israel. Why should Turkey encircle Israel, a country that it was second nation to recognize diplomatically? An Israeli newspaper hypothesizes that this Suakin base will be used against Egypt. If you drive a good car from the island to Cairo, it takes 105 hours! It is only six hours from Istanbul! (The Israeli military genius must be really a myth.)

It is true that Turkey, aligning itself with Qatar, is effectively blocking the formation of an anti-Qatar front in the Gulf. Also, supporting the stability in Iran, Turkey has already stopped a holocaust that would have made World War II look like a second-rate county bonfire. Turkey helped organize the very first “We cannot take it anymore” movement in the U.N. General Assembly to redress the harm the U.S. president intended to inflict upon the holy sites of the three religions in Jerusalem by simply pushing Netanyahu’s policies and recognizing the Israeli occupation of the Palestine lands. Fire and fury are what Turkey has prevented from engulfing the region when it became one of the three architects of the only peace solution that seems to work in Syria.

We do not need any more fires than those that have already burned too many souls in Iraq, Syria, West Bank and Gaza.