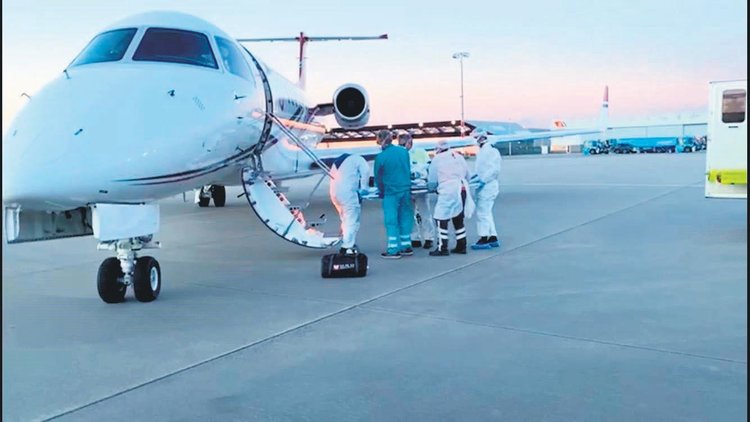 Doctors at a Amsterdam hospital told 23 years old Furkan Duman on Tuesday that they would stop treatment of his father from coronavirus infection because his condition was far beyond recovery. The young Dutch-Turk reached the Turkish embassy first and also started a social media campaign appealing for help from Turkish authorities for his 46 year old father. 2 days later, an ambulance jet landed in Amsterdam to pick up Furkan’s father who is now being treated at a hospital in Ankara and showing small but steady improvement, according to the doctors.

It was not the first time that Turkish authorities had to reach out to help a Turkish diaspora member who has been denied coronavirus treatment. Turkish Health Ministry has stated that 233 covid patients have been transferred to Turkey from other countries, 74 of whom were members of European Turkish diaspora.

“If you have the Turkish nationality, you can go to Turkey to receive care there. Health care in Turkey has a good reputation,” journalist Mitra Nazar was quoted saying by a Dutch webpage. “There is ample capacity, during the pandemic there was no overcrowding,” Nazar reiterated

Coronavirus pandemic has further exposed the medical discrimination as is the case in other aspects of life for Turkish diaspora in Europe. “His suffering will only last if we continue with the treatment. There is no point in treating him,” Furkan was told by the doctors in Amsterdam about his father. But Turkish doctors decided that Furkan’s father could still recover after studying his condition. Turkish authorities sent a private plane to pick him up and paid all costs including long treatment in Turkey.

Hospital in Amsterdam, however, claims everyone gets the treatment that he or she needs. The chairman of the Dutch Association for Intensive Care was quoted saying “It makes no sense to keep people alive who are on a ventilator and can no longer communicate. That is not in the patient’s interest.

Fatality figures in Europe show that Turks are 4 times more likely to die from coronavirus in Europe than they are in Turkey. Luckily, Turkish government has stepped in to save at least 233 of them so far. Journalist Nazar says Turkish government has given a clear message to Turkish Diaspora especially during the pandemic: “Wherever you are in the world, you will always be important to Turkey.”