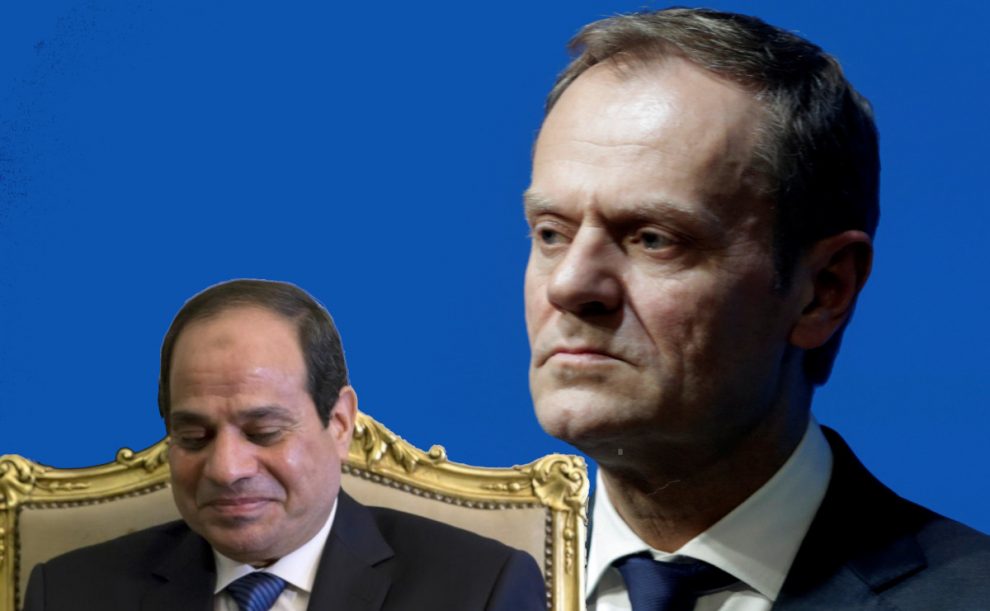 It is difficult to say what “common” challenges and shared interests former Polish Prime Minister and present European Council President Donald Tusk thinks his organization has with the Arab League. But as he mentioned, they have lots of differences. Especially with the president of the host country, Abdel-Fattah el-Sissi, they should recognize that they have major problems.

The current president of Egypt is an autocratic ruler with little political credibility, but with self-delusions of grandeur: a tin-pot dictator. He seized power with a military coup that overthrew the elected president, Mohamed Morsi, in 2013, killing 846 people and jailing some 60,000. Since he took power, 739 alleged supporters of the Muslim Brotherhood have been sentenced to death—”the biggest mass sentence was given in modern Egyptian history”—even though their executions were postponed for “security concerns.”

Only four days before the European Council’s Tusk, the European Commission’s Jean-Claude Juncker and various European presidents and prime ministers rushed to Sharm El-Sheikh on Feb. 24 to hug him, el-Sissi executed nine people, making his total of hangings 15 for this year. Three were hanged for their involvement in the 2014 killing of a judge’s son in Cairo. Another three were put to death for killing a police officer in 2013. The last nine were found guilty of participating in a bombing that killed Prosecutor Hisham Barakat, the highest-ranking official assassinated since the military coup.

Families and European human rights groups denounced the executions, saying the men were sentenced to death after being subjected to torture and beatings to extract confessions. Three were under the age of 18, said their families. The 9 people were among 28 men sentenced to death for the killing of a public prosecutor. To get confessions for the killing, several of them were kidnapped and tortured. Najia Bounaim, Amnesty International’s North Africa Campaigns director said, “Egyptian authorities must urgently halt this bloody execution spree that has seen them repeatedly putting people to death after grossly unfair trials in recent weeks.”

The European Union used to oppose the death penalty in all cases without exception, regardless of the nature of the crime, the characteristics of the offender or the method used by the state to kill the prisoner. “The death penalty is a violation of the right to life” they kept lecturing the world. Apparently, the hypocritical European leaders were satisfied when el-Sissi rejected “any reference to allegations that confessions were extracted.” His Ministry of Justice said there could be no infringement upon the Egyptian judiciary.” Sissi defended the death penalty at the Arab-EU summit, saying the two regions had “different cultures.” Yes, as Donald Tusk says, there are differences between the EU and Egypt, but so what? What is important for the Europeans is business, selling things to Egypt, and they should start somewhere. Tusk said, “This summit is only the beginning, but a very good beginning.” The Arab world promised to buy more from Europe, and to soothe the conscience of Europeans, Mr. Tusk insisted, “That our summit declaration should include our common commitment to the upholding of all aspects of international human rights law.”

Incidentally, John Ketch, generally known as Jack Ketch, was an infamous English executioner employed by King Charles II. His notoriety stemmed from the barbarity he skillfully employed in his executions. Instead of cutting off the heads of the convicted in one blow, Jack Ketch made the victim suffer horribly – blow after blow. Because of his botched executions, the name “Jack Ketch” is used as a proverbial name for death, Satan and an executioner.