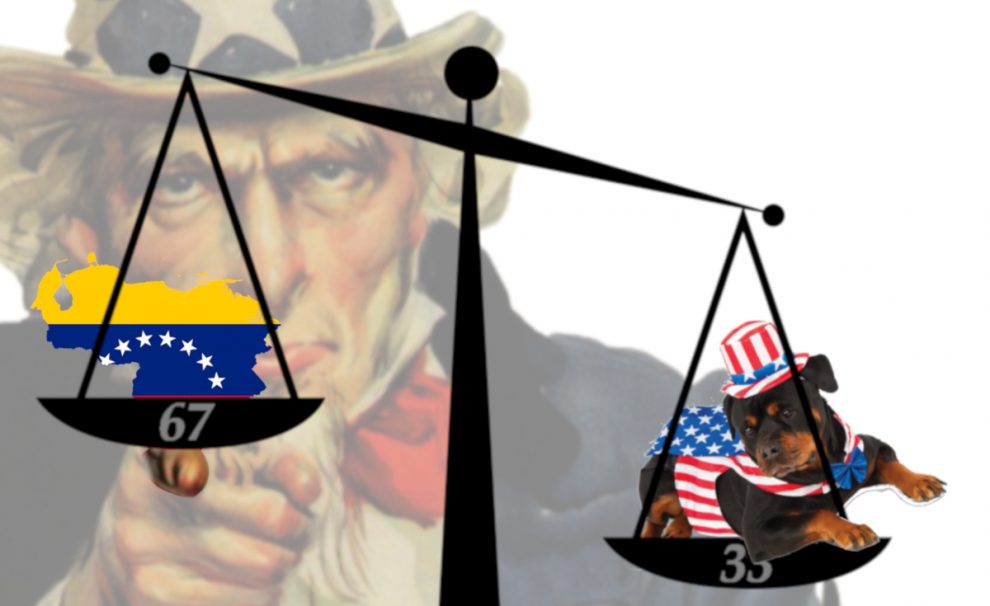 After getting 67 per cent of the national votes, the next day Reuters reports, “A bag of rice on a hungry family’s kitchen table could be the key to Nicolas Maduro retaining the support of poor Venezuelans in the presidential election.”

All the admirals and generals line up behind you against a handful of your officers’ putsch attempt, while the U.S. press portrays you as resisting the people’s revolution. A young politician declares himself the president of the parliament and the interim president of the country, breaching each and every article of the constitution, and the U.S. president decides to funnel all the money owed to your country to himself.

Jonah Goldberg in his weekly National Review newsletter responded to those who call for national solidarity in the U.S., saying, “National solidarity is awesome – when it’s on your terms.” He also pointed to the old joke that the best form of government is the “good Czar.” However, the issue is that political systems do not always produce good Czars. As the American founding fathers once noticed, men are not angels, we still need governments, and the only guarantee of a good government is democracy, checks and balances and divided government.

However, as Goldberg concludes for the national solidarity calls in his country, democracy is awesome – when and if its electoral system produces a Nicolas Maduro. Almost all liberal intellectuals hated U.S. voters when they elected Trump as president. They hated him – and the system – more when he sabotaged the GOP plans in Congress. But nobody questioned the validity of democratic procedures in the U.S., except perhaps for a few lunatics here and there; nobody dreamed of a coup by the Joint Chiefs of Staff. Venezuelan democracy is acceptable if the leader it yields does not defend the rights of Palestinians if he is not against the incorporation of Arab lands under Israeli occupation into Israel proper.

If you ask the editors of The Independent newspaper in London about those “crimes against humanity” they accuse Maduro of, what could they say other than what disgruntled former bureaucrat Luisa Ortega could say. What is the proof they have about the outrageous claim that the government is responsible for the 8,290 deaths Ms Ortega says took place between 2015 and 2017 at the hands of officials who received instructions from the government? Could they publish a news report like this about any British prime minister if someone claims it?

Yes, democracies sometimes produce people you and I would not like. They may be extremely populist demagogues. Still, no matter what, the West, the U.S. and the EU should stop playing the role of the global authority of election endorsement. We all now know how their scheme works: They cultivate a young and ambitious politician or an army general either giving him money directly or promising him economic support after the coup and providing him with logistical support against the legitimate government. Before the coup in Egypt, the country had suffered from severe shortages of food and medicine. During the putsch Abdel-Fattah el-Sissi started on July 3, 2013, the cellular network in the country, as well as its internet connection, was cut off for hours.

Nicolas Maduro is not a Hugo Chavez. Starting coalitions and dialogues are not his strongest points. But we can see U.S. and EU fingerprints on the coup in Venezuela. Last week, the president of the National Assembly, Juan Guaido, declared himself the interim president of the country. Guaido was immediately recognized as the legitimate president by the United States and its cronies in the Lima Group. The EU followed suit as well as the Organization of American States.

Now, Germany, France and Spain call for new elections in eight days or they say they will recognize Guaido as Venezuela’s interim president. Where in democratic theory does it say that foreign countries are allowed to demand general elections in a country if they don’t like the existing leaders? Unfortunately today, a democratic mechanism is considered valid if it produces what the U.S. and the EU want.