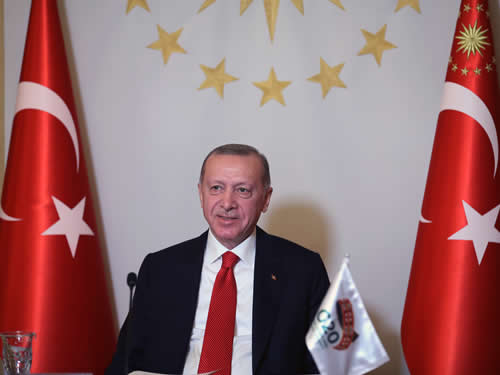 Addressing via videoconference the G20 Leaders’ Summit, President Erdoğan said that the coronavirus pandemic continues to threaten the entire humanity, and noted: “We, as people in the same boat, share the same destiny, as well. It is impossible for us to succeed in the fight against the pandemic without cooperation and solidarity.”

Addressing the Summit, President Erdoğan said that the coronavirus pandemic continues to threaten the entire humanity, and noted: “As I stated at the extraordinary summit on March, we, as people in the same boat, share the same destiny, as well. It is impossible for us to succeed in the fight against the pandemic without cooperation and solidarity.”

“Unfortunately, the world, developed countries in particular, has not performed well in terms of solidarity and mutual assistance during the pandemic process. Especially the countries that are economically weak have virtually been left to their fate in the fight against the pandemic,” President Erdoğan said.

Underscoring that Turkey has delivered aid to 156 countries and nine international organizations, President Erdoğan stated: “Besides having offered 15 G20 member countries grant aid thus far, we have also given permits for purchase and export from our country.”

President Erdoğan went on to say: “We gladly follow the promising news about a vaccine produced by two Turkish scientists in Germany. However, we should draw attention to an issue at this point. The developed vaccines must be brought into use as the common property of the humanity instead of further deepening the current injustices. Within this framework, the G20 platform must prepare and operate mechanisms to ensure that everyone will have fair access to the vaccine with an affordable price. As Turkey we approach with this understanding to 16 vaccine studies of ours, one of whose human trials we have begun. We will inshallah put the vaccine Turkey will develop at the entire humanity’s disposal.”

Further stressing that the pandemic makes its effect felt in the economic architecture as well as the field of health, President Erdoğan continued as follows: “We see that the protectionism is on the rise, customs walls are re-rising and tendency towards introversion is growing stronger. We all know very well that ‘two wrongs don’t make a right.’ Turkey is in favor of a fair global economic growth and share of welfare in line with the basic principles of the World Trade Organization. To that end, the reform process of the WTO should be moved forward. It is a must that the organization’s functions of monitoring, negotiating and settling disputes, which have crucial importance, be improved.”

“THOSE, WHO WORK IN THE INFORMAL ECONOMY, AND FRAGILE SEGMENTS OF THE SOCIETY SHOULDER THE BURDEN OF THE PANDEMIC MORE”

Pointing out that the pandemic adversely affects the labor market as well, President Erdoğan said: “Especially those, who work in the informal economy, and fragile segments of the society, women, the youth and the elderly in particular, shoulder the burden of the pandemic more. The difficulties experienced have once again shown the importance of comprehensive and enduring social security systems. We are one of the countries that have the most encompassing and the most broad-based social security systems. Through ‘Economic Social Protection Shield’, which we rapidly developed and launched, we successfully implement the measures that will balance employment. As the G20 we have implemented an ‘Action Plan’ in order to minimize the effects of the pandemic. We welcome the gradual progress made in ‘Debt Service Suspension Initiative’, which we consider to be the most concrete pillar of the Action Plan. Before I end my remarks, I am happy to inform you that as Turkey we will continue to contribute to this initiative, which has been extended until July 2021.”