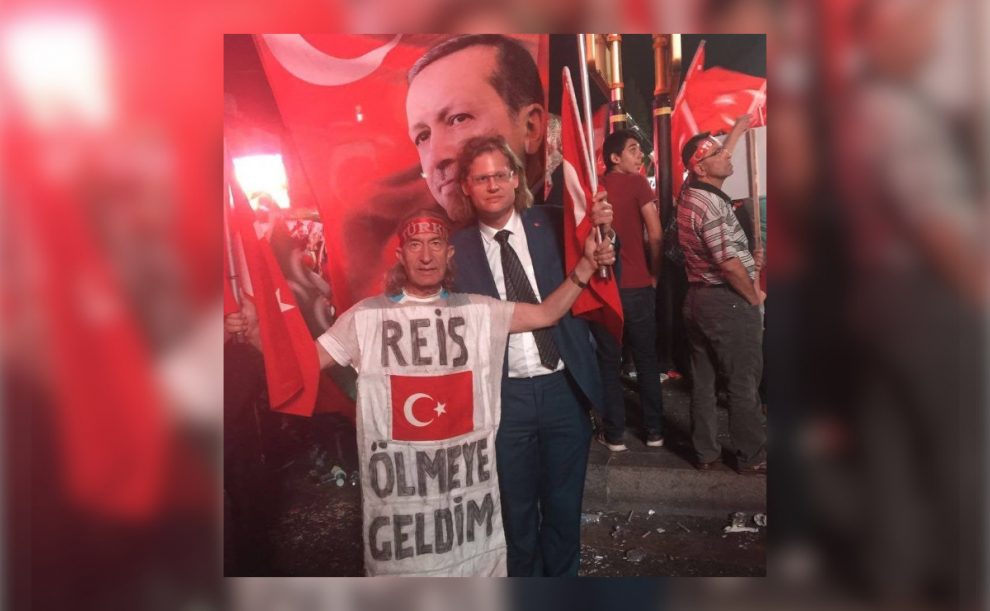 Three years ago I was a witness of the civil resistance against the 15 July coup attempt. As a journalist I was very lucky to be at the right time at the right place in order to witness how the Turkish people countered the coup attempt at the İstanbul Atatürk Airport in the night from 15 July to 16 July. Major events of that bloody night took place at and around Turkey’s biggest airport where President Recep Tayyip Erdoğan arrived after he survived two publicly known assassination attempts.

Shortly after Erdoğan left his hotel at Marmaris, two or three helicopters attacked the hotel he had left. According to eyewitness accounts, ten to fifteen heavily armed men landed and started firing. In the ensuing conflict, two policemen were killed and 8 were injured. The assaulters propably did not know that Erdoğan has left his Hotel already towards the direction of the Dalaman Airport in order to fly to İstanbul.

“At least two F-16s harassed Erdoğan’s plane while it was in the air and en route to İstanbul. They locked their radars on his plane and on two other F-16s protecting him,” a former military officer with knowledge of the events told Reuters.
A senior Turkish official confirmed to Reuters that Erdoğan’s business jet had been harassed while flying from the airport that serves Marmaris by two F-16s commandeered by the coup plotters but that he had managed to reach İstanbul safely.
A second senior official also said the presidential jet had been “in trouble in the air”.

Erdoğan neither surrendered himself nor escaped the country unter these life threatening circumstances. Erdoğan acted as a true leader dedicated to the well-being of the people of the Republic of Turkey.

Around midnight I arrived at the Atatürk Airport with Turkish Airlines flight TK 1724 departing at 20:15 hours at Berlin’s airport Tegel. I have been at a press meeting at the Embassy of the Islamic Republic of Iran at this evening. I had to leave the meeting before it ends to catch my plane. I was flying to İstanbul for an interview with the Egyptian TV news channel Al Watan based in İstanbul.

When I left the Turkish Airlines plane at the Atatürk Airport, I saw heavily armed rebels occupying the international arrivals terminal where I just arrived.

The people, young and old, male and female, religious and secular, were literally protecting the airfield for the landing of the presidential plane.

At the upcoming days, I covered the Democratic meetings in Fatih (İstanbul) as well as in Kızılay and Beştepe, both Ankara).
I also watched in public and private Turkish TV channels how dozens of Millions of Turkish citizens in all 81 provinces of the country gathered together in a peaceful way all nights long after an exhausting working day to protect the democracy, their freedom and their civil rights.

I had the chance to take part in the Yenikapı meeting for Democracy and for the Mourning of the Martyrs. At this rally, at least five million people gathered together at a huge compound in central İstanbul. Later that day the local authorities closed the compound for new arriving protesters who had to preserve standing in the streets and squares around the Yenikapı meeting point because it was too crowed.

Until today, three years after the failed coup attempt, in my eyes the Yenikapı meeting remains as a symbol for national unity and solidarity of the people standing united for universal values as democracy and freedom.

German media later claimed a gathering of hundreds of thousands people instead of millions. Another failure of the German press.
Four days later I reported from the public speech of President Erdoğan in front of the Mosque of the People in Beştepe. Again President Erdoğan was surrounded and acclaimed by millions of people who blocked all roads in Ankara in the attempt to arrive on time for the President’s speech in Beştepe.

It is the historic achievement of President Erdoğan that he united the Turkish people at the Yenikapı meeting and beyond it, no matter which party the people of the Republic of Turkey may support and regardless their ethnical or religions background.

Unfortunately, the German media have lied about the fact that the Turkish people have stand together after 15 July and German press have told the story of a Turkish President who had deeply divided its people and the society.

At day and at night, I did interviews with the people gathering at the streets and places in İstanbul and Ankara) after 15 July. They kept on saying all the time how much they care about their democratic elections, constitutional state, rule of law and civil rights.

The democratic movement of the 15 July aftermath is due my point of view a unique civil society and vital grassroots movement from the bottom up by the people of Turkey to defend their state, country, constitution and nation.

Unfortunately, no head of state of a foreign country visited Turkey in the 15 July aftermath. After the Charlie Hebdo shooting in 2015 in Paris, I saw the Turkish Prime Minister Ahmet Davutoğlu a few days after the attack demonstrating in the streets of Paris for the freedom of speech and for democracy.

Neither German chancellor Angela Merkel nor German President Joachim Gauck, nor any Minister of Germany travelled to Turkey during the 15 July aftermath.

Actually, the German politicians did not have to travel from Germany to Turkey to express their solidarity with the the bereaved of the 15 July coup attempt and with the people of Turkey struggling for democracy and freedom.

There has been a meeting against the coup in Cologne on 31 July. It was the meeting that had to ban an appearance of President Erdoğan after the Federal Constitutional Court of Germany in Karlsruhe blocked his speech. This highest court decision is nowadays called the “Erdoğan decision” in the jurisprudential literature. The decision confirmed respectively pronounced the prohibition of a transmission via video screen of President Erdoğan and other Turkish politicians in the rally in Cologne on 31 July.

In the morning of 31 July I took a train from Berlin to Cologne in order to participate in the meeting against the coup. I was even invited by the organizers to address the crowd. My speech was about the perception of the failed coup attempt in the German mass media, in the political civil discourse of German law makers and executive decision makers.

Unfortunately, I did not see any German politician at the 31 July Cologne meeting against the coup.

The willful ignorance of German politicians regarding the 15 July events is a shame for Germany and a burden for the German-Turkish relations.

Profile Interview: Professor Sadek Sellam
‘If we are scared…’
Comment