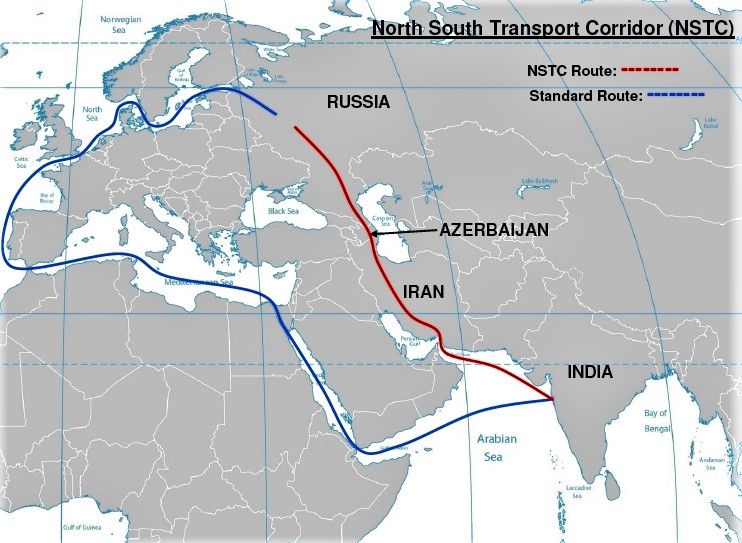 Iran, together with India and Russia, is pushing forward with a sea and rail corridor that could substantially reduce the time and cost of shipping goods from India to Europe. If successful, the corridor could challenge the Suez Canal’s primacy and give Iran a significant advantage as its rivalry with Saudi Arabia and the United Arab Emirates plays out in Central Asia.

As Eurasia’s geopolitical sands shift, Iran is touting a sea and rail hook-up involving Iranian, Russian, and Indian ports that would link the sub-continent to northern Europe as a viable alternative to Egypt’s Suez Canal in addition to China’s Belt and Road Initiative.

Iranian and Indian officials suggest the route would significantly cut shipping time and costs from India to Europe. Senior Indian Commerce Ministry official B. B. Swain said the hook up would reduce travel distance by 40 and cost by 30 percent.

The Iranian-Indian-Russian push is based on a two-decades old agreement with Russia and India to establish an International North-South Transport Corridor (INSTC) as well as more recent free trade agreements concluded by the Russia-dominated Eurasian Economic Union (EAEU) with Iran and Singapore.

The agreements have fueled Central, South, and Southeast Asian interest in the corridor even if the EAEU itself groups only a handful of countries: Russia, Kazakhstan, Belarus, Armenia, and Kyrgyzstan.

Exploiting the momentum, Russia has been nudging India to sign its own free trade agreement with the EAEU while the grouping is discussing an accord with the ten-member Association of Southeast Asian Nations (ASEAN).

If successful, the Iranian push, backed by Russia and India, would anchor attempts by Iran to project itself – as opposed to Saudi Arabia and the United Arab Emirates – as the key Middle Eastern player in Russian and Chinese ploys for regional dominance.

Leveraging geography and Central Asian distrust of past Saudi promotion of its ultra-conservative strand of Islam, Iran expects that kickstarting INSTC will give it a significant boost in its competition with the kingdom and the Emirates for the region’s hearts and minds.

INSTC would also strengthen Iran’s position as a key node in the Belt and Road on the back of a two-year old rail link between western China and Tehran that runs across Kazakhstan, Uzbekistan, and Turkmenistan.

India’s Ambassador to Russia, D. B. Venkatesh Varma, told a webinar hosted by the Federation of Indian Chambers of Industry and Commerce that he expected to bring shipping and insurance companies as well as other businesses and stakeholders together to advance the INSTC.

The Iranian-Indian-Russian push suggests that Iran is playing multiple cards in the geopolitical jockeying for the future of Asia amid much speculation about a draft Iranian proposal for a 25-year strategic partnership with Beijing that if agreed and implemented would inextricably hook the Islamic republic to China.

The INSTC would link Jawaharlal Nehru Port – India’s largest container port east of Mumbai – through the Iranian deep-sea port of Chabahar on the Gulf of Oman, funded by India to bypass Pakistan, and its Caspian Sea port of Bandar-e-Anzali to Russia’s Volga River harbor of Astrakhan and onwards by rail to Europe.

Suez Canal Authority spokesman George Safwat dismisses assertions by Iran and Russia that the link would cut shipping time from 40 days through the Suez Canal to somewhere between 25 and 28 days.

Speaking to Al-Monitor, Mr. Safwat said it takes only 19 days for a container shipped from India through the Suez Canal to reach the German port city of Hamburg.

Moreover, he said INSTC would be unable to match the Suez Canal’s capacity to accommodate more than one billion tons of cargo a year.

The Iranian push was boosted in March by an agreement between Russia and India that would enable the shipment of goods through the corridor on a single invoice within a matter of months.

“Within three months, traders from India and Russia could move goods between the two countries through Iran,” said V. Kalyana Rama, the chairman of India’s state-owned Container Corporation (Concor).

Indian sources close to the Chabahar project told Inside Arabia that the ability to issue one bill of lading, that would allow exporters to get a bank letter of credit, coupled with an agreement by state-owned Russian Railways (RZD) to act as the carrier, had removed key obstacles for INSTC.

The sources said shipping costs were likely to be pushed upwards by the fact that much of the cargo traffic would be originating in India rather than destined for India. “Empty containers on one leg adds to the freight cost,” one source said.

The Russia-India agreement nevertheless takes on added significance as countries seek to diversify their supply chains after the experience of bottlenecks during the coronavirus pandemic.

If successful, the corridor could benefit men like Adar Poonawalla, whose Serum Institute of India is the world’s largest vaccine manufacturer.

It may, however, not all be smooth sailing.

Chabahar, located in the Iranian province of Sistan and Baluchistan, is not immune to the fallout of renewed Baloch nationalist violence in neighboring Pakistan.

The violence, effecting investment in Gwadar – the Chinese backed port 70 kilometers down the coast in the Pakistani province of Balochistan – may give Chabahar a leg up but raises the specter of proxy battles with Saudi Arabia and India, suspected of supporting the nationalists for different reasons. Saudi support targets Iran while India’s focus is Pakistan, its longstanding nemesis.

In a further twist, Iran this week denied Indian media reports that it had dropped India as a partner in the development of a rail line from Chabahar to the border with Afghanistan because of delays in Indian funding.

Iran’s IRNA news agency, however, quoted Farhad Montaser, an official of the country’s Ports and Maritime Organization, as saying that Iran and India had failed to agree on Indian participation in developing Chabahar’s railway infrastructure during the original talks that secured Indian support for the port.

This would have included a 1,000-kilometer line to Sarakhs on the Iranian border with Turkmenistan. Iran has said it would fund the construction of railway infrastructure.

Indian analysts told Inside Arabia that the government in Delhi had put participation by a state-owned Indian infrastructure company on the backburner because it may violate harsh US economic sanctions against Iran.

“We are very much in the game, but progress is slow due to the current political environment,” India’s Zeenews quoted government sources as saying.

That offers Gulf states at best temporary consolation. Uncertainty about the outcome of the November election in the United States that could sweep presumptive Democratic presidential candidate Joe Biden into office holds out the prospect of an administration that would be more critical of Saudi policies and more willing to return to negotiations with Iran.