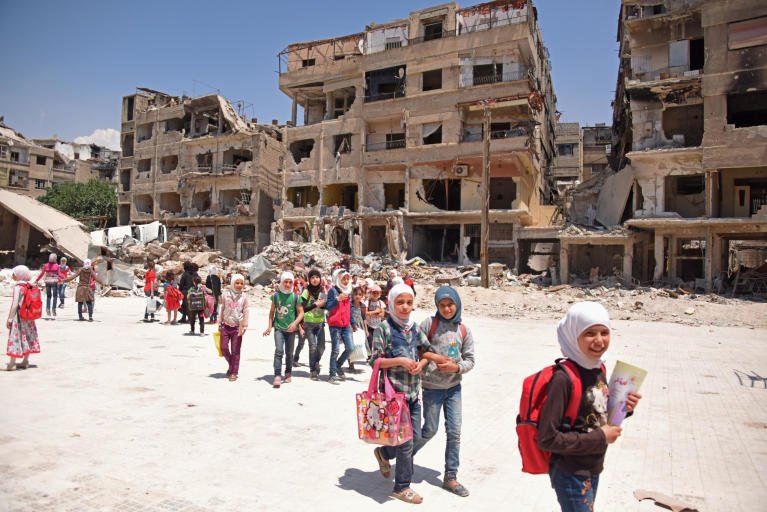 Iran always occupied a warm spot in the collective heart of Syria’s Baath Party and the Assad family; they were the only entities in the entire Middle East ruling a Sunni people with a strong Shiite yoke. The Arab world maintained a hawked-eyed presence in the lands of their estranged brother. Estranged because Syria was one of the few republics in a land of sheiks and emirs, but still it was an Arab country – and they could not neglect it.

Former leader Hafez Assad’s regime preserved a balanced demeanor to keep up appearances for the Soviets because he had just signed an agreement with them yielding military and naval bases, thus assuming the role of a modern country worthy of friendship with socialist brothers. His son Bashar Assad had a freer hand than his father because the Russians themselves were wobbling between a Soviet-like dictatorship and Tzarist modernity and reformation when Bashar took over. So, he maneuvered between the United States and Russia. He still does, with one additional patron: Iran. When he created a full-fledged war out of one simple Arab Spring demonstration, causing a 10-year war that has left 600,000 dead and 10 million refugees, Iranian mullahs became the collective rulers of Syria, deepening the Shiite regime’s hold over the educational, judicial and political systems. Usurping Syrian resources, Iran created not one but two armies in the region: the Lebanese Hezbollah, which is de facto powerbroker among the local factions and between Israel and Lebanon; and the Syrian Shiite militias who call themselves “Hezbollah fi Suriya” (Hezbollah in Syria) and increasingly show loyalty to Tehran over even the Assad regime.

With this militia, Iran filled the gap that Arab nations left behind when the United States pushed all its allies into an anti-Iran stance in hope that isolation would force Bashar into a conciliatory position. It didn’t. Syria’s Arab neighbors should know better and recognize the motive behind the U.S. policies. Beginning with former U.S. President George W. Bush and continuing with former U.S. President Barack Obama, the U.S. policy has been to make the Arabs look elsewhere, and meanwhile violate the integrity of Syria, dismembering it into three parts: Sunni north, Kurdish east and Shiite south.

But how could Syria’s Arab neighbors notice what was happening while Iran was said to be surrounding them with the Shiite Crescent, beginning in Yemen and ending in Lebanon. When the deceiving apparatuses of U.S. diplomacy and intelligence start rolling, the sheiks and emirs of the region could not tell hay from straw. Yes, there was an Iranian-instigated war in Yemen with the propensity to spread to Saudi Arabia, and the Iranian threat from Lebanon to not only Israel but to Egypt and the Gulf countries seemed to be real at times. But there was such a historical facts as the Farsi exaggeration in all local folklore; it’s being “that close to having an atomic bomb” also seems to be a motive in the modern Israeli fairy tales. Besides, all those sheiks and emirs (and the only president of a republic in the midst of them, Gen. Abdel-Fattah el-Sissi) were craving alms from the U.S. in the form of military aid and international recognition. They asked how far away when the U.S. asked them to get away from Syria; the isolated Bashar and the Baath regime found solace in the skirts of mullahs’ robes and Russian boots.

Meanwhile, the U.S. policy worked: two-fifths of the country is now in the hands of local organizations derived from and run by the PKK terrorist organization’s Syrian wing, the YPG. The exact size of the area called Rojava (or, as termed by the U.S. occupation forces “the Autonomous Administration of North and East Syria”) has not been reported by the U.S. or Syrian sides.

Now that the country has been dismembered and the U.S. has successfully created a Syrian “Kurdistan” 15 times larger than Gaza, Syria’s Arab neighbors began visiting Damascus. Abdullah bin Zayed, the brother of the United Arab Emirates’ (UAE) de facto ruler, Crown Prince Mohammed bin Zayed (MBZ), and the UAE’s foreign minister officially visited Assad and said Syria’s return to the Arab League would help distance Syria from Iran. Bahrain has reopened its embassy in Damascus, and Algeria’s foreign minister said the Arab League will welcome Syria to its ranks after kicking it out 10 years ago. Jordan’s King Abdullah talked to Assad on the phone about possible economic cooperation between the two countries. Egyptians are also trying to convince Washington that a strategic dialogue to make Syria assume its “traditional role” will support Arab security in the region. (One should ask Egyptian Foreign Minister Sameh Shoukry how could a country that cannot support its own security without Russia go on to support security in the region).

Anyhow, the U.S., coquettishly, rejected any normalization with the regime in Damascus; State Department spokesperson Ned Price said that “they will not express any support for efforts to normalize or to rehabilitate Bashar Assad who is a brutal dictator.” Perhaps, the “Kurdish” state still needs the U.S. umbrella before it strongly takes root and all Arabs accept the creation of it as they accepted the “Kurdish Regional Autonomous Area” in Iraq.

For a long time, the U.S. used the presence of Daesh terrorists in Syria as a pretext for creating and arming a “Kurdish” force. If you look at the number of weapons and equipment, you’d think that all the Daesh forces in the world had flocked to Syria. Turkey and Arabs know that the main objective is to create a new state in the area that could act as a barrier for any Iranian assault on Israel and to provide an unsinkable aircraft carrier in the region in case NATO allies are not providing the unconditional help. If it were a fight with Daesh, Turkey, the second-largest army in NATO, would gladly carry that task yet again and for free.

Russians are holding their own umbrella to the Damascus regime in so far as they stick with the agreement that allowed Russians to have a foothold in the Mediterranean. They seem to not care about what the U.S. is doing to their allies, the Syrians.

How many times has Turkey put its credibility on the line saying that it supports the territorial integrity of Syria? The Syrian opposition is the only group that has a single-minded focus on a democratic regime with fair and free elections. When they will be safe and secure in their homes and workplaces, when the 4 million refugees can safely return to their country, Turkey will have no need to maintain the safe zones along its borders with Syria. Turkey was and will be the largest trade partner of Syria. Turkey’s umbrella over the northern area mainly keeps PKK terrorists away from the border. All the known PKK terrorists are now busy digging tunnels to Turkey.

The creation of a PKK state in Syria is not going to stop there. That is why U.S. President Joe Biden’s administration appointed Brett McGurk as the Middle East and Africa coordinator. He resigned from his post when former President Donald Trump promised to withdraw all the U.S. forces and outsource the fight with Daesh to Turkey. He claimed several times that the U.S. efforts to create a “Kurdish” state are not limited to eliminating Daesh in the area.

That is why American arms and dollars are raining down on the Syrian land.