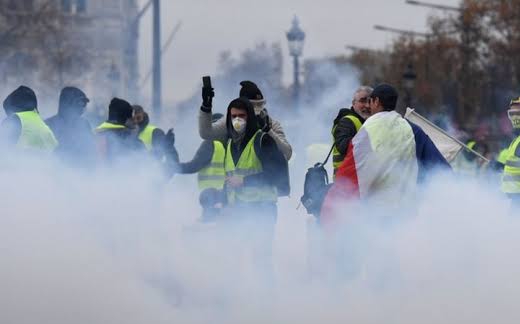 The anger is not about simple social demands for a decent and a better life, it has become for a large majority of the protesters a personal fight with President Macron.

 The anger and determination of the “Yellow Vests” protests against rising taxes and the high cost of living have turned into riots in the city of Paris as police fired tear gas and water cannon in street battles with activists. Across France and the overseas’ Department region, in the western Indian Ocean (l’Île de la Réunion), people are venting anger and frustration. The protest movement, however, has sociologically managed to reunite the problematic issue of socioeconomic inequality and the political bankruptcy of the conventional political parties and union movements.
Thus this failure of the so-called institutionalized intermediary body has left the President, his government and party feeling that the winds of change are definitely blowing, which has made a large majority of the Republic “en marche” to panic. “Unbelievably shocking images indeed,” Premier Philippe declared to the media in his visit to the Paris Police Operation Center on Saturday afternoon.
The most beautiful and chic avenue in the world, Avenue des Champs-Élysées, turned into an urban insurgency field of burnt cars and trucks on its adjacent streets, dozens dispersed to arrest anti-Macron rioters, while more and more people are joining the movement, including high school students in the Parisian suburbs and city provinces, like Toulouse — symbolically the taking of the extremist-nebulous protests stained the l’Arc de Triomphe with: “Macron Démission, Macron Dégage (leave), and we’ll triumph.”
Ave des Champs-Élysées. Photo courtesy of Abdennour Toumi

A frontal clash between the angry protest members and the Republic anti-riot police created an element of surprise among the politicians and the media; usually such violent acts occur in France’s banlieues, not in its bourgeois quarters. An element of political violence was revealed by the exercise of power that President Macron has been ignoring, thinking he could marginalize the angry movement, gambling on its political amateurism and angelic militancy.
President Macron imploded the political parties during his campaign that led to his installation in the Élysée Palace in May, 2017. His’ “New” world attitude and rhetoric governing style established a vertical system that irritated the conventional Union(s), the political opposition, and the people. All went well until last summer, in the wake of the Élysée political scandal, the “Benalla Affaire”, an opportunity that resurrected the opposition from its aches and pains. France of the bottom or ‘du terroir’ has never forgot that hot summer episode of French melodrama politics.
On Saturday an urban-war was most clearly the topic of breaking news head lines expressed on French News outlets and international media. Nonetheless, France’s political “new” establishment found itself cornered and “incompetent”; on Friday afternoon an attempt at crisis management by Premier Philippe and his team with the “Yellow Vests” representative(s) was a debacle. A communication blow to the government and the President (who was in Buenos aires attending the G-20 Summit).

The President and his government have been using a demonization tactic to discredit and to some point criminalize the protesters in the use of violence. The end-game strategy to sell the conflict nationally and internationally between peaceful protesters and anarchists who want chaos. The violence that erupted in Paris on Saturday was not a banal protest, according to many specialists on social movement groups, it was a semi-insurrection, said one C-News commentator and analyst.
Place Charles-de-Gaulle, Prissier, France. Photo courtesy of Abdennour Toumi

Their anger is not about simple social demands for a decent and a better life, it has become for a large majority of the protesters a personal fight with President Macron a hatred towards him, hence towards the French institutions and eventually the police. Though the Interior Minister showed some laxity in his management of the Paris riots, causing some analysts and urban security experts to wonder about a faction of pro-Yellow Vests in the Parisian police. The Minister admitted his misjudgment and estimate of the protesters’ number and determination, “we were wrong,” he told BFMTV.
Paris’ urban insurgency reveals a France divided between the wealthy class and poor popular class, between the privileged social success and the have-not social struggle of metropolitan France.

Politics in general is based on symbolism and myths; on social media people are already twitting and posting on Face-book about the ‘Battle of Paris II’, in reference to the Nov. 13, 2015 Stade de France and Bataclan terrorist attacks. But the “Yellow Vests” extremist and anarchist factions seemed to be okay with a large majority of the peaceful “Gilets jaunes” protests in part because they unveil the mask of the government’s incompetency and the biased press complacency.
The violence was not largely the work of a right-wing fringe nor the lefty anarchist movements, according to an eyewitness on the field on Saturday afternoon. These radical groups were overwhelmingly active but surpassed by the number of peaceful “Yellow Vests” protesters who came from the entire French Provinces to demonstrate their anger, mostly young white men and women.
There was also violence on the margins of largely peaceful “Yellow Vests” demonstrations in Nantes, Bordeaux, Toulouse, Marseille, Lyon, and Lille. But no other city witnessed the anti-system and physical destruction on the largest avenues and grand boulevards as the French Capital.

It is unfair on the other hand to place full responsibility on the President who has been in Office for one-year and a half. He is trying to break a forty-years-long political taboo to reform the country and find solutions for the French malaise, where the unemployment rate in France stood at 9.1 percent in the third quarter of 2018. The opposition though is trying very hard to capitalize on the “Yellow Vests” anger — but they are suffering from credibility in the wake of this social revolt, because people are no longer trusting mainstream political parties. Even Ms. Le Pen, the Far-Right (RN) party leader, is treading carefully, as is Jean-Luc Mélenchon, leader of (LFI) radical Left party; both have called for the dissolution of the Parliament as an exit strategy to the sociopolitical crisis, but it will be political tragedy for the President.
Subsequently a new “political movement” has emerged, a movement that sees politics from the “bottom-up,” one that faces serious imperatives for structural organization, like representation and direct talks initiating negotiations with the officials, local and national elected-representatives. This is the movement’s weakest link so far, and it is seen as an handicap by the media and the politicians, but nevertheless it turned to ridicule the entire President’s establishment and the new Parisian start-up political elite.
In this conflictual relation between the power and the people, the latter has said loudly that its movement is apolitical and none-ideological. In political science theory there is no such thing, it might be for the moment, as their demands and determination are anything, but political. But their fight with a technocratic President who was elected democratically, may result in the bankruptcy of the classical political parties and their alarmist discourse.
However, the dynamic of the crisis and its management will change in the coming days.  In the wake of Saturday’s Paris riots the government officials are talking about re-establishing the State of Emergency to master the security question and prevent another security and disorder fiasco in Paris next Saturday, especially critical at holiday time when luxury boutiques and restaurants suffer direct collateral damage in the fight,  Meanwhile the “Yellow Vests” are in a process of structuring themselves to become a reliable partner in the first negotiations with the government, and eventually a political movement à la M5S Five Star Movement in Italy.
A spontaneous social movement led by ordinary citizens wearing “preventive route” vests have taken the form of an urban insurgency led by dystopian groups to expose a new Prince world, who want to revolutionize the “old” world politics through Dégagisme,  a political term coined during the Arabs’ Spring in Tunisia and Egypt; yet the President was hit by the boomerang effect, and today a large majority in France are calling: Macron dégage, Macron démission, and the specter of a one-term President is haunting President Macron like his two predecessors.

From a Social Movement to an Urban Insurgency in France

Political Climate Shapes the Architecture of German Mosques
Who did Kemal Kilicdaroglu Want to Please with his Germany Visit?
Comment