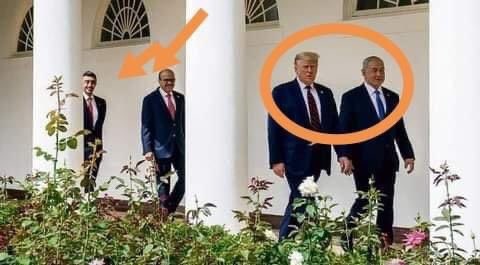 The UAE has formalized its relations with Israel after reciprocal declarations in August and a deal signed under the auspices of US President Donald Trump. While majority of Arab regimes supported the deal and Bahrain followed the UAE to develop relations with Israel, Arab people are not happy with developments.

Many social media users saw the rapprochement as a theatre. Some users said that there was no war between the two countries, thus the deal can not be called as a peace deal. Another user said Israel will not withdraw from occupied lands just because relations are changing for the better. Conversely, Palestinian users say, the move of the UAE is a declaration that it will sell the Palestinian cause for its own interests.

Meanwhile, photos and videos taken during the signing ceremony of the peace deal was seen as shameful. The UAE Foreign Minister does not know where to sign on document in video. In addition, Trump and Netanyahu walk ahead of Bahraini and UAE foreign ministers in a photo. Arab users depicted the photo as bosses (Trump and Netanyahu) and slaves (Bahraini and UAE foreign ministers).