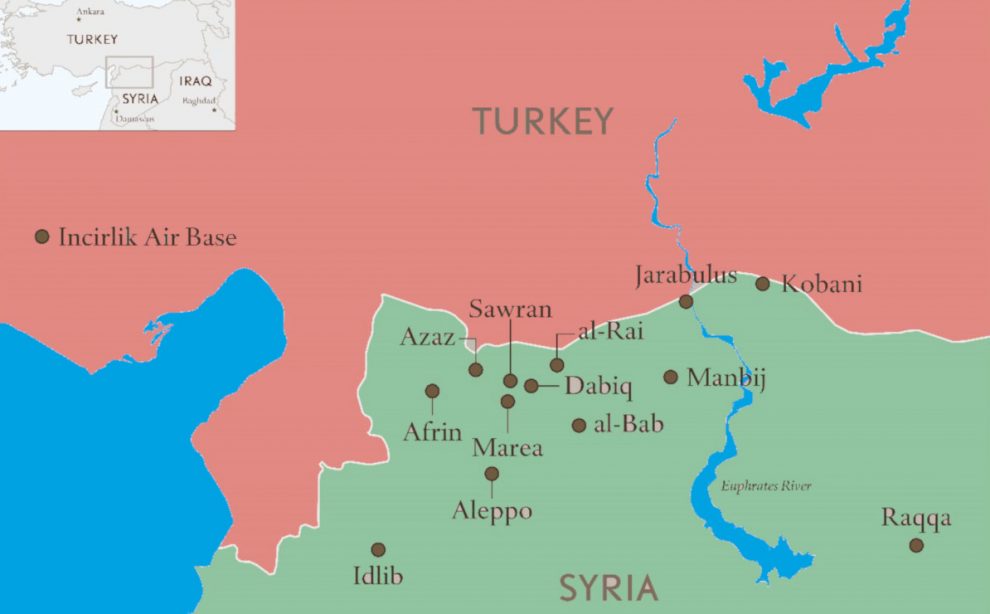 Ankara can run large-scale counterterrorism and stability operations while meeting demanding logistical requirements; no other US ally could bring such a force concentration to the table

On Dec. 19, 2018, President Donald Trump made a bold move and ordered a full withdrawal of over 2,000 US troops from Syria. The decision probably caught even some members of the Trump administration off-guard. Furthermore, the President, through his twitter account as usual, told that Daesh was defeated at large, and thereby, regional allies, chiefly Turkey, would eradicate what was left of the terrorist organization.

Ankara welcomed the decision and underlined its commitment to boost the counter-Daesh efforts. In the meanwhile, the Turkish military is gearing up for a cross-border campaign in the east of the Euphrates river, which would mark the third major endeavour following Operation Euphrates Shield and Operation Olive Branch. Current indicators suggest that the scale of the campaign could be larger than the previous ones, which would demand a thorough force generation. At the time of writing, it was really hard to monitor what was going on in Manbij.

The withdrawal news and Turkey’s preparations exacerbated the already fierce debates, as one could expect. Critics of President Trump’s decision mainly reacted to two aspects. While some disagreed with the declaration of victory in confronting Daesh, others voiced their scepticism about working primarily with Turkey, instead of the Obama administration’s legacy of cooperating with the PYD / YPG (under the Syrian Democratic Forces framework) which have organic ties with the PKK terrorist organization.

In fact, it would be wise to avoid declaring an early victory against Daesh. The terrorist network is resilient, cunning, and is watching for an opportunity of resurgence. It has not been fully defeated yet. Only, territorial setbacks have brought about a drastic shift in its centre of gravity.

However, when it comes to the scepticism about more closely partnering with Turkey, the discussion needs a sober wake-up call. Both in the Turkish and American strategic communities – hopelessly letting aside most of the European reactions that managed to romanticize a security issue –, the arguments seem to be away from realpolitik and coolheaded realism. Simply put, Turkey is a NATO nation that enjoys one of the strongest military powers in the alliance, and borders Syria along a 900-km frontier. The force it could bring to hammer the terrorist threat would be larger and more battle-hardened than the entire armed forces of many US allies. Overall, it is not the Trump administration, but geopolitics that favours the Turkish option.

Let us continue with some tangible, realistic facts for grasping the current situation.

First, Turkey remains the only NATO nation that has not adopted a ‘no boots on the ground’ abstention when fighting the terrorist threat in Syria. In fact, many Western states have preferred very low profile military commitments (save France, which sent its sole aircraft carrier to pound Daesh following the tragic 2015 Paris attacks). In general, Washington’s allies employed limited airpower, and at best, dispatched small special forces contingents. Ankara, on the other hand, deployed a multi-brigade assault force to strike the terrorist organization’s major bastion in the west of the Euphrates, al-Bab. Back in 2016, the al-Bab offensive marked the one and only situation that a NATO nation’s large conventional formations even engaged in close quarters combat with Daesh militants.

Second, Turkey enjoys the second largest land force within the transatlantic alliance, in addition to some 900-km frontier with Syria. In recent years, its entire commando brigades have fought in active armed conflicts, including urban warfare environment. Besides, the Turkish military enjoys robust armed drone capabilities, a modern air force, and combat-ready armoured and mechanized units deployed along the Syrian border. All in all, Ankara can run large-scale counterterrorism and stability operations while meeting demanding logistical requirements. No other US ally could bring such a force concentration to the table.

Third, leaving aside military capabilities, Turkey has the will to take over the leading responsibility in wiping out the remaining Daesh presence in the northern parts of Syria. The United States does not have any other ally whose government, parliament, and more importantly, public opinion would largely approve sending troops into a civil war-torn country.

‘Substantial ties’ and perils of the past

Most of the think-tanks in Washington objected President Trump’s decision. Some recommend sticking with the PYD option and kept considering the group to be the primary partner in Syria.

Let us re-think the issue in a different light. “The PKK is a terrorist organization not only in the eyes of the Turkish government but in the eyes of the US government as well”. These were the words of US Secretary of Defense Ashton Carter during his April 2016 testimony before the Senate. Notably, upon a question, Secretary Carter also confirmed the existence of “substantial ties” between the PYD / YPG and the PKK. Now, any policy recommendation favouring the SDF option (despite the PYD / YPG dominance) over a NATO ally, who was with the US troops across Korea to Afghanistan for more than half a century, will have to explain if Secretary Carter was wrong when confirming the “substantial ties”.

Some colleagues in D.C. could find the abovementioned lines intentionally ignoring the current problems in the Turkish – American bilateral relations. Indeed, they could readily give some instances suggesting serious drawbacks, say, the potential S-400 procurement (noting that the author has penned various technical reports arguing that a NATO-compatible air and missile defence system would best serve Turkey’s military modernization priorities). Without a doubt, the Turkish – American relations, as well as Ankara’s transatlantic ties, have been through troubled times recently. No sober analyst can deny that.

Yet, the US policy circles should also see the very fact that the moment President Trump hinted at a withdrawal from Syria, the PYD / YPG has started to force their cooperation options with the Baath regime and the Syrian Arab Army.

For experts, the emergence of a harmonious alliance between the PYD / YPG and the Baath regime would come as no surprise. Hafez al-Assad’s government had been a terrorism exporter into the region — designated as a state sponsor of terrorism by the US State Department. Turkey was among the victims of Damascus. For decades, Hafez al-Assad’s notorious al-Mukhabarat supported the PKK and provided the terrorist organization with a safe haven in the Syrian territory. It was only in the late 1990s that al-Assad stepped back when Turkey decided to pursue a coercive diplomacy effort through a deterrent military buildup, signalling a punitive incursion. In 1998, Hafez al-Assad’s regime signed the Adana protocol promising to cease its support to terrorism in Turkey. It was a promise and an official confession at the same time. Overall, those problematic ties, if they ever completely vanished, might rejuvenate easily. On the other hand, the sceptics about partnering with Ankara might want to revisit Turkey’s bright stability operations and security cooperation performance through the NATO experience Afghanistan.

Apart from the SDF obsession, some analysts, in fact rightly, argued that Daesh was not defeated and the fight was not over when criticizing President Trump’s decision to withdraw. This is accurate. Daesh is not finished. The group still has thousands of fighters across Iraq and Syria (more precisely, some 30,000, according to the US Department of Defense estimates) along with many terrorist entities around the globe, which pledged allegiance to the organization. Open-source intelligence pieces of evidence suggest that the terrorist network has smuggled $400 million [1] out of Iraq and Syria, and could use this money to start lucrative business activities in the Middle East. Moreover, Daesh managed to get its hands on thousands of passports, travel documents, and identity cards. Finally, Iraq’s some 12,000 archaeological sites, some hosting artefacts dating back to 9,000 B.C., remained under Daesh’s territorial control. Notably, historical artefacts smuggling is an important revenue generation source for the terrorist network. All these factors point to a shift in the centre of gravity, rather than a big collapse.

However, to decisively prevent the resurgence of Daesh, the first and foremost requirement is to prevent the terrorist group’s ability to exploit the vulnerabilities of the Sunni Arab population of the region.

The PYD / YPG, and the Baath regime pursue aggressive demographic policies in the areas that they hold. The UN Secretary General’s Nov. 21, 2018 report to the Security Council revealed that education in Arabic was banned in more than 250 public schools in the northeast of Syria. According to UN findings, some vehicles transporting children to schools were also prevented at the checkpoints in Qamishli. Well, these are not good signs for halting the resurgence of Daesh. Alienating the Sunni Arab population could badly backfire. One should recall that back in 2007, the turning point in tackling the Iraqi al-Qaeda and its provocative exacerbation of Iraq’s insurgency was the US political-military leadership’s effort to work with the Sunni Arab tribes, and not against them.

All in all, the Syrian conundrum is so complex as it is made of hundreds of simple pieces. If the Lebanese Hezbollah and Iran stay in Syria, Israel’s national security will be severely threatened. If Russia can secure an international consensus to reconstruct the country, it would mark a true victory. If Europe cannot get a return of the refugees to guarantee from Moscow in a reconstruction deal, then far-right movements would further rise. If the US’ PYD / YPG engagement does not have a limit and hints at the prospects of a post-civil war political design, it would significantly harm Turkey’s transatlantic ties and Turkish – American relations. Like an oxymoron at its best, these are simple complexities in Syria…

Nevertheless, there is also ground for optimism. The withdrawal decision was declared in a flamboyant way and shocked international community. But now, there is a new chapter in restoring the troubled relationship between Washington and Ankara. With right moves, Turkey could prove the value of having a NATO ally bordering Syria in tackling Daesh’s resurgence to the American policy community, while, in return, the US could show that it would never favour the PYD / YPG over a key NATO nation. In fact, this mutual confidence-building remains a geopolitical imperative for both.