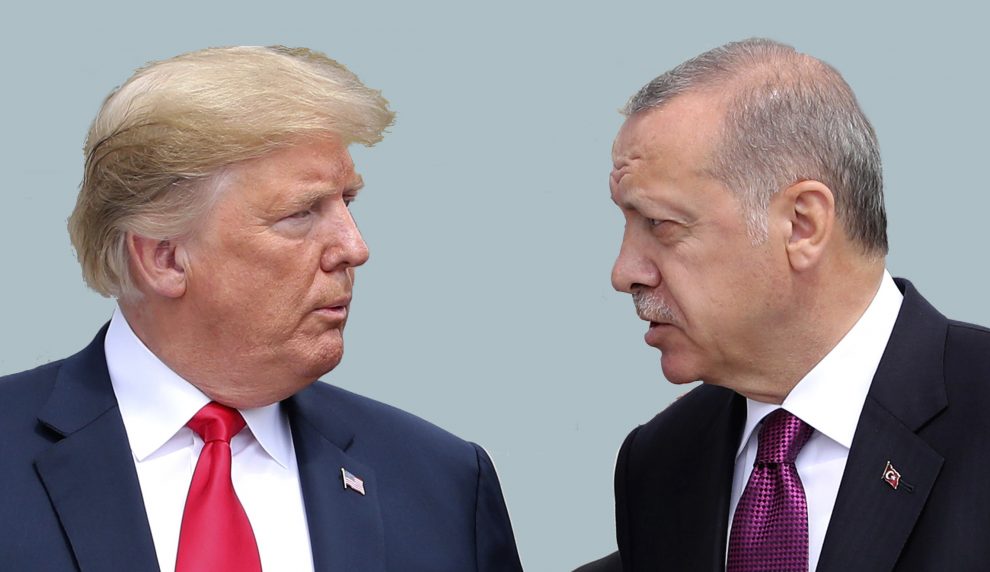 Bolton is certainly incensed about Trump’s decision about Syria, and as soon as he arrived in Israel – on his way to Turkey – began contradicting President concerning PKK. In anticipation, Turkish weather is turning frosty

“The USA is not able to understand or see who its true friends are.”

Contrary to my expectations, developments continue in the right direction.

By now, everyone is familiar with the mid-December conversation between Turkish President Tayyip Erdogan and U.S. President Donald Trump that resulted in Trump’s handing over security responsibilities in northeastern Syria to Ankara.

The following weeks have seen some tweaking to Trump’s original decision to exit as soon as possible. The main reason is that Turkish officials want a planned U.S. withdrawal in order to limit the opportunities that other actors, namely the Damascus regime, Russia, or the PKK/PYD/YPG itself, might have to tilt the situation to their advantage. Turkey’s request is eminently logical and any rational U.S. policymaker should see that.

Syria is not the only positive development, however. Immediately after the New Year, delegations from the U.S. began to stream into Ankara. After the first group arrived, we soon learned that members of the delegation took testimony from key Gulenists in Turkish custody and that the Turkish government shared large amounts of crucial evidence related to the defeated July 2016 Gulenist coup attempt.

Normally, this would be a routine development in a judicial process, and may not lead to any sort of legal move towards extraditing Fethullah Gulen to Turkey. But this is a vital development in light of what has not happened in the past two and a half years. Basic evidence-gathering is the most overt signal so far indicating that judicial processes against Gulen might be on the horizon, and is by far the most important step that the U.S. government has taken in regard to the many Gulenists implicated in the coup attempt and sheltering in the U.S. At this point we can only continue to observe and hope that court proceedings regarding Gulen’s extradition will be initiated posthaste.

These recent developments give the impression that Trump has wrested control over policy decisions concerning Turkey’s region away from the military, National Security Advisor John Bolton, and Trump’s son-in-law Jared Kushner. Until December, Trump had displayed no influence over these issues, and Bolton’s influence had pushed U.S. foreign policy in even more aggressive directions.

But suddenly Trump took the initiative away from the military brass and Bolton. During Trump’s conversation with Erdogan, Bolton was reportedly at his side. Trump overruled the arch-hawk and ‘America-firster’ Bolton and gave orders to start the withdrawal. Now, Bolton is on his way to Ankara (after a stopover in Israel) to carry out negotiations concerning the U.S. pullout. Bolton is certainly incensed about this turn of events, and as soon as he arrived in Israel, began contradicting Trump concerning the PKK. This means that Bolton’s every move and statement should be scrutinized intensely. Bolton’s visit should also be entertaining if we get to observe some of the political theatre. In anticipation, the Turkish weather is turning frosty.

The irony is that it is the Trump Administration making decisions that the Obama Administration should have made years ago. Even though Trump’s predecessor had six months after the coup attempt to take the appropriate legal actions against Gulen and his cult, absolutely nothing was done. The only thing that President Obama accomplished in regard to Turkish-American relations during the waning months of his Presidency was to convince the Turkish population’s vast majority that either he did not care about the fact that a figure responsible for killing hundreds of Turkish citizens resided in the U.S., or he tacitly supported that person. Either way, Obama’s memory will be forever cursed by most Turkish people even though he began his Presidency by travelling to Istanbul and Ankara, and once enjoyed great popularity in the country.

Consequently, with every passing day, the Obama Administration’s policies towards Turkey and its region during 2012-2016 appear increasingly disastrous and misguided. There is no question that Trump has trouble staying focused, is beset by myriad domestic political and legal problems, displays little concrete knowledge on any particular issue, and frequently resorts to fabrications in order to present his version of the world. But in relation to Turkey, his current choices (and ignoring, especially, his purposeful attempt to cripple Turkey’s economy last summer) seem enlightened in comparison to those preferred by his predecessor.

The question that historians and political scientists interested in Turkish-American relations will have to grapple with is exactly why Obama’s policy choices towards Turkey were so completely wrongheaded: was is it bad information? Prejudice? Fear? Disorganization? If Hillary Clinton could understand that the U.S. needed to work with Turkey on regional problems (refer to her autobiography Hard Choices), why could Barack Obama not understand the same reality? Though Hillary Clinton recommended the correct path, the ultimate decisions were not hers to make.

A problem deeper than information

Instead, I would suggest that the available information’s interpretation is where fatal mistakes were made. And I do mean “fatal”, because the policy decisions made by Barack Obama’s administration towards Syria and Turkey in 2012-2014 eventually cost hundreds of thousands of lives. My suspicion is that the officials charged with evaluating the available information and then formulating policy simply did not have the education, the background, the experience, or the analytical capability to ascertain what the correct policies should be.

Certainly, if those officials were reading or watching U.S. media coverage of Turkey and Syria in those years, they would have had little understanding of the situation’s essence or the issues involved; the international press was only marginally better. For those officials to understand, at that juncture, what U.S. policy towards Turkey needed to be was not simply a matter of having a strong grasp on what U.S. interests were. A solid understanding of the socio-political transformation taking place in Turkey, in all of its dimensions, and in the broader region was also necessary. Without that greater perspective, they could not approach the information in their possession with clear-sightedness. Somewhere in the cloud of information and officials that produced Obama’s foreign policy decisions, monstrous errors occurred.

Until late last year, President Trump’s administration displayed the same behaviour. For that reason, Turkish Foreign Minister Mevlut Cavusoglu, during the knowingly provoked August attack on Turkey’s economy, stated with palpable exasperation that the U.S. did not have the ability to discern who their true friends were. The last month, on the other hand, has witnessed sudden, positive developments. Have U.S. officials finally grasped some fundamental realities that previously eluded their awareness? Has the Trump Administration finally seen the obvious, that a democratic NATO ally should be the logical choice to trust on regional security matters? Can the Trump Administration recognize the Gulenist malady plaguing relations between the two states and take the correct actions?

Hopefully, we will soon witness positive answers to these questions.