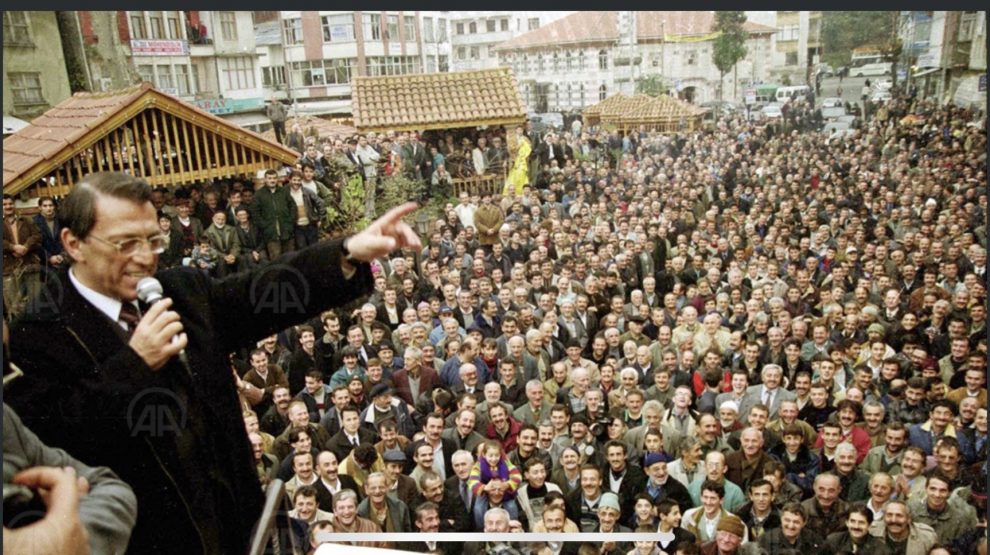 Former Turkish prime minister Mesut Yilmaz has passed away at the age of 73 after fighting cancer for 4 years. His legacy includes being a prominent actor in crushing religious circles during infamous 1997 and speaking out about Gulenists being the perpetrator of bloody coup attempt in 2016. While some ardently argue that Yilmaz was a true patriot, others blame him for being one of the orchestrators of a vicious crack down on conservatives of Turkey. His legacy pretty much reflects Turkey’s turbulent hunting past.

On 25 December 1995, a conservative party won a general elections for the first time in Turkey. Necmettin Erbakan’s Welfare Party won more than 21 percent of the votes changing the course of history for Turkey. Perhaps, political developments in Turkey in the past two decades have been the result of 1995 general elections and the ensuing events. President Suleyman Demirel had to appoint Necmettin Erbakan to form the government as he was the leader of the winning party. Erbakan formed a coalition with True Path Party to become the prime minister of the 54th government of Turkey. Soon after started the immense pressure from media and the Turkish military which traditionally considers itself as the protector of secularism. Turkish national TVs ran news everyday to manipulate the public about how secularism was indeed in danger. Then came the infamous February 28th. Turkish National Security Council forced the conservative prime minister Erbakan to resign after having him to sign series of council decisions which started a witch hunt on religious circles. The event would be dubbed as “post-modern military coup” as traditional coup steps as abolishing the constitution or dissolving the parliament never took place.

That is where Mesut Yilmaz stepped in. President Demirel was supposed to appoint Tansu Ciller, Erbakan’s coalition partner, to form the next government as she was the leader of the runner up party in the elections. Demirel, bypassing the laws, opted for Yilmaz whom was chosen by the military leadership as the next prime minister and whom would implement oppressive decisions of the National Security Council to save “secularism.”

Following years, Turkey turned into a living hell for religious people. Thousands of people were fired from government jobs and from the military for simply practicing most basic tenets of Islam. Headscarf was banned from universities and new regulation made religious high school graduates practically impossible to enter universities which ended education right of thousands youngsters. Mesut Yilmaz has been seen by many as the crime partner of those oppressive years.

Turkey 1997 post-modern coup was projected to last one thousand years by the perpetrating generals but Turkish economy turned into a total disaster in the upcoming years. In 2001, Turkish economy was struck by the worst financial crisis of the century which brought down the leftist government and caused yet another early elections. In late 2002, former mayor of Istanbul from Erbakan’s Welfare Party, Recep Tayyip Erdogan, entered the political stage of Turkey by winning a landslide elections to become a single-party government after two decade. Following years brought Turkey financial and political stability as the military was finally taking somewhat under civilian control. That lasted until 2016. Islamist-disguised religious cult Gulen Movement attempted a vicious coup on July 15th of that year by its crypto staff which have been infiltrating the army for more than 4 decades. 251 people were brutally murdered while the Turkish Parliament has been bombed by Gulenist pilots. Turkish people’s epic resistance that night protected the Turkish democracy from being set back by another coup for the first time. However, Turkish government has had hard time explaining the world that the bloody coup attempt was perpetrated by a dangerous clandestine group which has been ever-growing the western countries through same methods it has been operating in Turkey. Dominant western media preferred to run stories that coup could be an inside job of Erdogan while portraying Gulenist as victims. German media led the way on that storyline while German government harbored tens of thousands of fugitive Gulenists after the coup. Late prime Minister Yilmaz stepped in one more time almost 20 years after leaving the politics this time in defense of Erdogan’s party which was a splinter of Erbakan’s Welfare. Yilmaz has always been seeing as someone who led the way to crush religious Turks but this time he came out to defend same people. He went on national German and Austrian channels to speak out about how Gulen cult was indeed the perpetrator of 2016 coup attempt. When Ak Party officials were having hard time to find a stage to speak the truth about the coup, Yilmaz was defending them with his fluent German.

Turkey’s deputy Culture and Tourism minister Serdar Cam posted a tweet right after Yilmaz passed away justifying his decision in 1997 to form a military-supported government. “We were mad at him this time but if it wasn’t for those days, we perhaps could not have what we have today,” said Cam in his tweet meaning Yilmaz’s much-criticized decisions in 1997 paved the way for today’s Ak Party. Cam was harshly criticized by several religious people especially for the victims whom could not have college education for being a religious high school diploma or simply wearing headscarf. Several people like prominent columnist Ismail Kilicarslan consider Yilmaz an instrumental part of vicious crack down on religious people.  A Turkish producer at Associated Press whom asked not to be named had to go to Austria for university after 1997 National Security Council decisions made it impossible for him to enter a university in Turkey. “I received better education, learned German and English, and now work at a world-renown news agency all caused by events of 1997,” he said. But he also pointed out that it was an unintended consequence of an oppressive policies of that government.

What would have happened if Yilmaz refused to form a government as the military hand-picked him in 1997 will always be a mystery. More than 20 years after Yilmaz chose to be a part of the events that drove an elected government out of the office, he left behind a perplexed legacy.