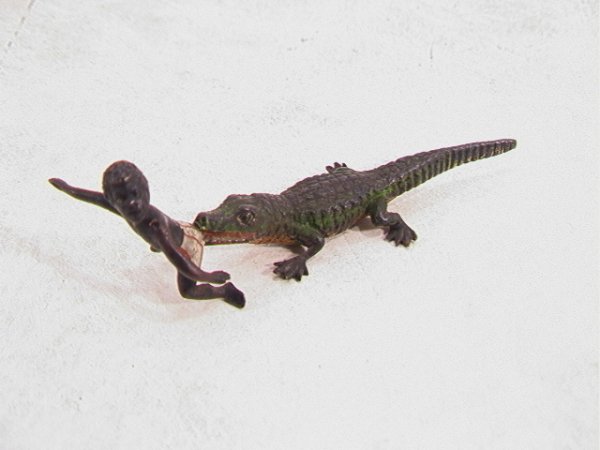 I am currently involved in a campaign here against a fast food chain called Daisy’s who has an “Alligator Bait” picture on the wall of one of its franchises. I wrote to the vice president of the franchise and his response was that each restaurant may have what they want on the wall, it’s “American art”. The fast food chain has a 50’s USA theme to it. In the mail I explained the background of this image, that it is demeaning, horrible and also that it may have historic background too. This is why I write to you, you have a very serious site.

Were babies ever used as bait? It isn’t really a question of whether African American babies were used as alligator bait, but the question is how frequent was the practice?

During slavery and the Jim Crow era in the United States, African Americans were brutalized and mistreated in almost every way imaginable. If there was a way to kill, maim, oppress, or use an African American for any reason, it more than likely happened. If the skin from an African American might be used for leather shoes or handbags, (see Human Leather), then pretty much all atrocities were possible and probable.

African American babies being used as alligator bait really happened, and it happened to real people. It doesn’t seem to have been a widespread practice, but it did happen.

It is hard to process the thinking that could lead a person to actually use a live human baby as bait for an alligator. That is why the objects in the Jim Crow Museum are so important – they help tell the story of a society that defined African Americans as “sub-human” by portraying them as savage and worthless creatures (“Americans Forced”, 1944). If people are indoctrinated, over and over again, with items, images, objects, and practices that devalue the humanity of African Americans, then practices like “African Dodger”, “Human Zoos” and “Alligator bait” become possible.

In 1908 the Washington Times reported that a keeper at the New York Zoological Garden baited “Alligators With Pickaninnies” out of their winter quarters. In the article two “small colored children happened to drift through the reptile house among the throng of visitors” and they were “pressed into service.” The alligators “wobbled out as quick as they could after the ebony mites, who darted around the tank just as the pursuing monsters fell with grunts of chagrin into the water.” The alligators were “coaxed” into their summer quarters by “plump little Africans” (“Baits Alligators”).

The headline in the September 21, 1923 Oakland Tribune reads “PICKANINNY BAIT LURES VORACIOUS ‘GATOR TO DEATH. And Mother Gets Her Baby Back in Perfect Condition; Also $2”. In the article T.W. Villiers chronicles the entire process of using black babies as bait and how “these little black morsels are more than glad to be led to the ‘sacrifice’ and do their part in lurking the big Florida gators to their fate without suffering so much as a scratch.” Villiers is quick to point out that the babies are brought out of the “water alive and whole and come out wet and laughing” and that “there is nothing terrible about it, except that it is spelling death for the alligators.” In a strange twist, Villiers reports on the hunter’s attempts to rationalize the motivation of the alligators to

“jeopardize every hope of life for a live baby, and in the matter of color, the additional information is vouchsafed that black babies, in the estimation of the alligators, are far more refreshing, as it were, than white ones.” The article describes the process of placing the babies near the alligator’s haunts, with the hunters hidden behind the brush with their rifles. When the baby “attracts” the gator and it exposes his “head and forequarters”, the hunters shoot the gator and claim their “prize.” And, just in case someone happens to care about the welfare of the baby, the reader is assured that “Florida alligator hunters do not ever miss their targets.” After the baby is returned to its mother, she is paid the set price of two dollars (Villiers, 1923).

One of the most disturbing articles about using babies as alligator bait was reprinted in numerous United States papers from 1888 until 1911. This article refers to an advertisement in Ceylon (modern day Sri Lanka) newspapers: “Babies Wanted for Crocodile Bait. Will be Returned Alive.” The whole process is described in detail and painted as a harmless way for Ceylonese mothers to earn a “small consideration” for the use of their “dark brown infants with curling toes” to attract crocodiles (“Babies for Crocodile”).

In July 1968, the Los Angeles Times ran an article about the great fireballer Bob Gibson. Gibson talked about the struggle to get respect as a baseball player and as a man. He recounted a story from his rookie year in Columbus, Georgia about a fan who called him “alligator bait”. Gibson laughed it off, but then he was told by some local folk that “Negro youngsters” were actually used in baiting alligators. “That’s where Negroes stood in Columbus” said Gibson, and went on to talk about the struggles he was currently enduring (Chapin). One interesting aspect of Bob Gibson’s story is the response from Cecil Darby, the sports editor of the Columbus, Ga. Ledger. Darby dismissed the story of African Americans as “alligator bait” as “tongue-in-cheek” and criticized Gibson for being “naive enough to fall for such a fantastic tale.” Darby dismissed the claim as a complete fabrication (“Golden Park”, 2007).

While actual incidents likely were rare, images and objects showing caricatured African American children as alligator bait were widespread. An article in the January 28, 1900 issue of the Washington Times reflected on the “Phenomenal success of a photograph styled ‘Alligator Bait’.” It told how the photograph got its name, its popularity from “coast to coast”, and reported that “sales from this one negative have reached nearly $5,000” (“Branson, of Knoxville”).

The term “Alligator bait” was also used as a slur toward African Americans. Examples are found in a 1908 Los Angeles Herald boxing match recap (“Bell Shows Yellow”); in a 1905 issue of the Richmond, Virginia Times Dispatch where two African American males are referred to as “alligator bait” for stealing a chunk of lead (“News Gathered”); and in an article from the 1898 Richmond Dispatch where the term “alligator bait” is used to describe the size of a “dusky bootblack” (“Bootblack’s Little Deal”).

In a review of popular toys in 1917, the New York Times reported that “In View of the improved call for stuffed boy and girl negro dolls, the ‘alligator bait’ is expected to have a big run” (“Outlook for Toys”).

Haley’s black book at UN Security Council
What comes next after the OIC summit?
Comment