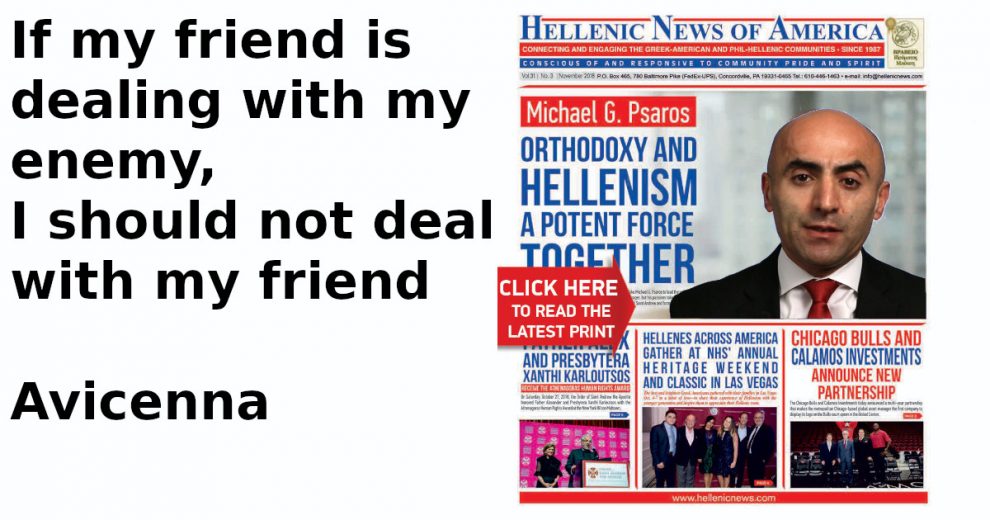 Many progressives, especially those who criticize everything President Recep Tayyip Erdoğan does, do far better than conservatives at framing events in a way that allows the masses to see the world as they wish them to see it. The basic reason behind this success is perhaps they have a disproportionately loud voice in the media (both old and new). Furthermore, the old mantra that says: “The enemy of my enemy is my friend” – which goes back as far as the Arthashastra, a Sanskrit political treatise from the fourth century B.C. – still appears to be relevant for progressives, whether liberal or left – but no longer so among conservatives!

As a case in point, a certain Soner Çağaptay, who goes around the U.S. as the “leading Turkey analyst at the Washington Institute for Near East Policy,” has just published his second book on Erdoğan. His first was titled “The New Sultan: Erdogan and the Crisis in Modern Turkey.” Having seen that there was, in fact, no crisis in modern Turkey at all, less than three years later, it appears he has published almost the same book, but with a new title, “Erdogan’s Empire: Turkey and the Politics of the Middle East.” If you publish a book foreseeing a crisis in a country where nothing of the sort is happening during the next three years, some eyebrows should be raised – but not if you are deemed an “expert” on Turkey! In fact, it is just as easy to promote the guy from a sultan to an emperor and still expect little in the way of scrutiny.

Their ilk will not only accept such attempts to reconfigure the truth but publish full-page interviews about the book. They spit and polish until such works shine even in Greece (perhaps, especially in Greece).

Greece’s To Vima daily, in lieu of reporting on the refugees killed by the government forces, took the time to interview Çağaptay on his new book. In the interview, the author, a Turkish national, said Erdoğan sought to make Turkey a great, autonomous power – first in the Middle East, then worldwide. Oh, what a great sin to want to make your country “a great, autonomous power”! For Çağaptay and To Vima, perhaps it should be that Turkey remain as it always has been since being frightened into an alliance with NATO.

Western sources attest that Uncle Joe was going to demand bases at the Straits in the west, and six provinces in the east. It is probable that, similarly, Uncle Joseph Stalin, too, was as kind and affable as Russian President Vladimir Putin has been over the course of this recent Idlib crisis – thus having, quite reasonably, scared Turkey into hurtling head-first toward NATO.

Yet, since 2002, the popular revolt that kept Erdoğan and his AK Party in power for the last 18 years, Turkey has been acting as independently as possible. Of late, our strategic partners in NATO have been practically pushing Turkey to other powers – especially in response to its attempt to procure the U.S.-made, NATO-approved Patriot air defense systems.

Similarly, when we seek peace in neighboring Syria, our Western allies start to equip and train local extensions of the PKK terrorist group there and start dismembering the country, forcing Turkey to go to Russia and Iran to maintain the territorial integrity of the war-ravaged state. What’s more, simply look at the debacle over oil and gas reserves in the Eastern Mediterranean. As if Turkey and Turkish Cypriots do not exist in the area, Turkey’s European partners and allies were already busy dividing the resources up among themselves. Meanwhile, when Turkey partners up with Libya, almost the entire European Union is up in arms!

So now, this so-called Turkey expert Cağaptay accuses Turkey of becoming “a great, autonomous power – first in the Middle East, then worldwide.” He should be happy about this as a Turkish national, rather than crying foul to Greek newspapers. Not only that, Çağaptay also complains that Erdoğan has “awakened imperial sentiments in Turkish society.” This, according to him is a development that tends to take on permanent characteristics.

In short, those Turks who have now got the taste of greatness and autonomy will not stop short of securing an empire. For To Vima editors, I have just one piece of advice: Spit some more on him and keep polishing. He is not shiny enough!