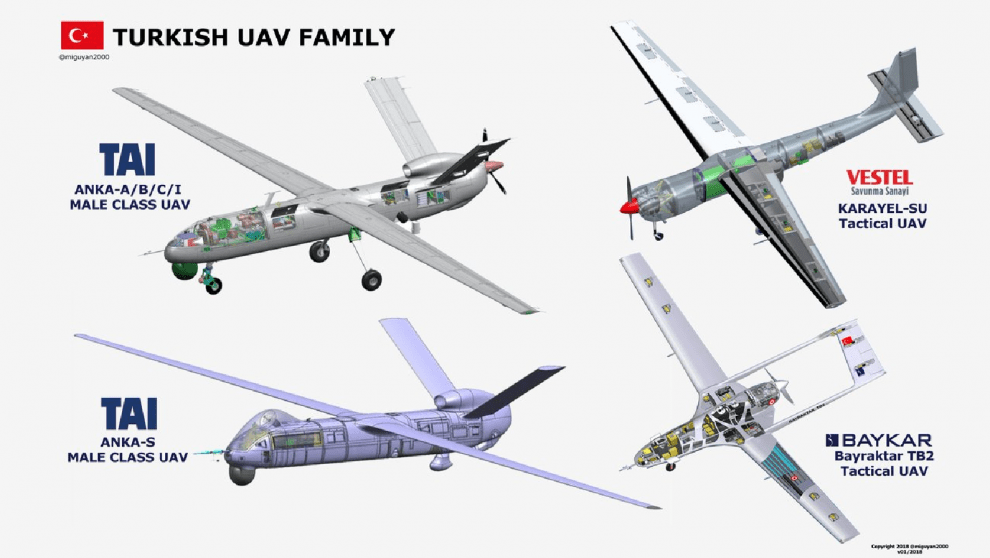 Unmanned Aerial Vehicles or Drones have been around for quite some time. Many modern forces have been using drones for surveillance, reconnaissance and even targeted strikes. But during the Operation Spring Shield Turkey took the utilization of drones to a different level. Ankara deployed combat drones in such a manner that will reshape the course of warfare. Turkish forces decisively conducted serial drone strikes on the pro-Assad forces in Northern Syria and destroyed hundreds of combat vehicles, many air-defense systems, ammunition depots and other combat facilities. For the first time in the history, many drones acting simultaneously were used to destroy armored vehicle fleets and ground targets. Those combat drones inflicted such severe damage on Assad’s ground forces that one third of the Regime’s operational capabilities perished within very short time span.

Turkey has achieved the ccapabiliy to carry out such a complex operation accurately, precisely, proportionately and cost effectively. Ankara now operates the largest fleet of combat drone in Europe with a majority of its fleets indigenously built. For Turkey to accomplish such an accurate operation a high quality of Command, Control, Communications, Computers (C4) and Intelligence, Surveillance and Reconnaissance (ISR) is must. And during this operation, Turkish Armed Forces has proven their capacity in C4ISR. Only a central integration of information can made it possible. Local defense companies made great contributions in this area as well, gathering and pprocesing encrypted information. Another significant tool that made the operation proportionate and price-effective is indigenously manufactured munitions. Turkish drones used mini laser guided munitions with several different warheads. Penetrating warheads were used against armored vehicles and tanks while highly explosive warheads were used against other ground targets like ammunition depots, anti-air facilities etc. These munitions were locally manufactured, effective and definitely cheaper than their targets.
Another remarkable achievement during Turkey’s operation was the destruction of two Russian made Pantsir air defense systems by Turkish drones. Turkey destroyed several air defense systems that belonged to Assad regime forces. But the Pantsir air defense system is different because it’s not a Soviet era weapon. It’s Russia’s cutting-edge technology for short range air defense and Moscow use this system to protect S-400s from saturated or low altitude aerial strikes. Turkish drones destroyed Pantsirs when they were active and operational. Turkish Defense Industries chairman Dr. Ismail Demir has answered how TAF drones turned the hunter into prey. He said that Turkish electronic warfare apparatus has opened a safe corridor for drones to conduct air strikes on Pantsirs. That means either the electronic trace of the drone was hidden or Pantsir systems were blinded. May be some other electronic measures were used and that perhaps remain unknow but Turkey’s electronic warfare superiority over pro-Assad forces and their Russian equipment was undoubtedly proven.
Turkey’s Operation in Idlib was less spoken and overshadowed because of the global outbreak of Corona virus and its’ economic impacts. But it was and will be carefully studied by military strategists and analysts very carefully across the world, with same attention the European powers paid into American civil war when the Unionist army started to use repeating firearms and changed the course of warfare forever. Turkey’s new doctrine of using a massive wave of combat drones has made tanks and armored vehicles very vulnerable. Now thousand dollar guided mini bombs can destroy million-dollar tanks and armored vehicles. Turkey has showed the world how drones can achieve maximum success in the battlefield within very short time and at minimum cost.