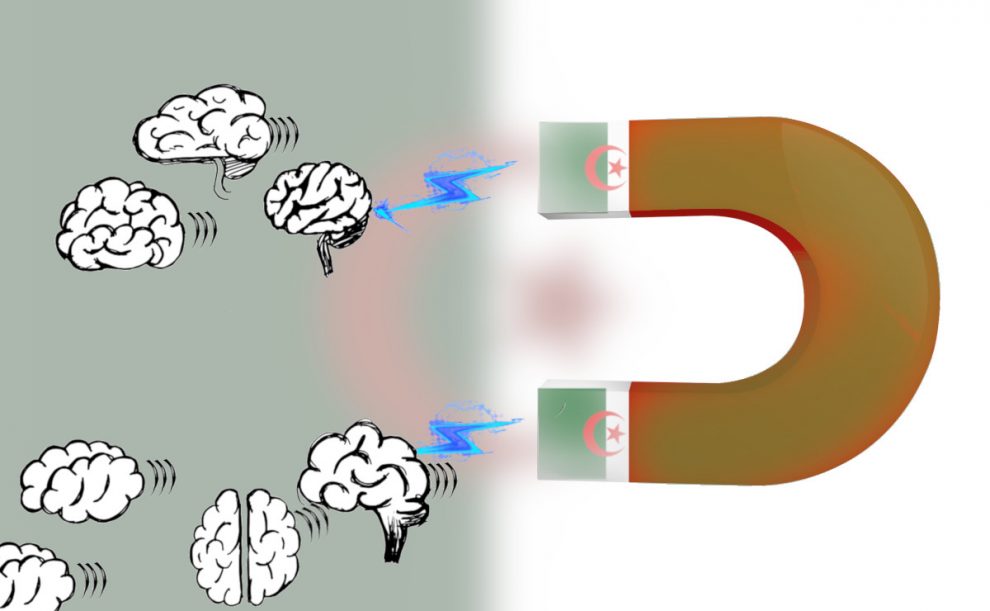 The phenomenon of departures abroad has slowed lately because of the Hirak’s dynamic of renewed hope, but the temptation is growing strongly.

Algerian “brain-drain” may well be one of the major challenges facing the new government that emerges from the election results. The country ranks 85 out of 189 in the Human Development Index of living standards compiled by the United Nations Development Program. In 2011, the government tried to prevent any further spread of the fever from the Arab Spring uprisings, offering billions in Algerian Dinar to pay for salary increases, interest-free loans, and thousands of jobs in the public sector.

However, 95 percent of government income depends on oil and gas revenues, which split in half in recent years due to the fall in the price of oil. Thus officials were pushed to impose a hiring freeze on public employment and initiate other austerity measures. As a result, the socioeconomic situation got worse, hundreds of thousands of young Algerians, notably university graduate students, sought to leave the country for a better life.

Although the state of the nation remains obscure during these tumultuous times, the country still has to deal with a series of vital challenges. Education and employment are definitely on the list and the question is, can the Algerian authorities manage to retain their nation’s brightest minds who are fleeing the country to follow an opportunity of international education.

While the protests in Algeria entered their 13th week demanding the departure of ex-President Bouteflika’s ruling clique, hopes and the commitment of the demonstrators remain firm toward their ultimate goal of relieving the nation of corrupted politics and bringing the economic crisis to an end.

The economic crisis and the political corruption that fueled the country’s decline during the 20-year regime has clearly been the major driver of such an alarming loss of talented and educated individuals. Official statistics show that around 30% of young Algerians are currently unemployed. Despite the fact that Algeria is the largest country in Africa by territory and boasts a reserve of natural resources like oil, it still remains behind in terms of academic development.

The phenomenon of “brain-drain” has become critical for Algeria, as the industrialized countries are increasingly hunting graduates from the Maghreb countries. Recruitment for highly skilled in the brain-and-gain economic equation flows mainly from some western European countries including Canada. Gulf countries have not drawn massive numbers, but are still attractive. Certainly, they are eyeing the young skills of emerging countries by offering them better prospects.

It is unfortunate, since Algeria has seen more than 100,000 graduates leave since 1990. Why has “brain-drain” or talent mobility accelerated significantly lately? Brain-drain goes back to the mid-70s during the golden age of the country’s milk-cow Sonatrach, the national Oil & Gas Company. As a major oil and gas producing nation citizens were guaranteed a safety net of welfare services. At that time then-President Boumediènne’s government offered highly-achieving students State scholarships to study abroad in the former Soviet Union and its satellite socialist Republics, even to the U.S. where hundreds of students benefited from the program — yet only tens of them returned to pay their due to the State.

For those who studied in the American universities, many of them never returned, and the few who came back faced the dilemma of bad management and structure. For example, Dr. Elias Zarhouni became an American citizen and a brilliant cardiologist. In his career he served as Vice-Dean of Johns Hopkins University of Medicine, and in 2002 he was appointed by George W. Bush as the nation’s fifteenth Director of the National Institute of Health. The same was true for Dr. Kamel Youcef Toumi, Professor in the Mechanical Engineering Department at MIT, Cambridge, MA. and many others in European and Arab countries.

The term “brain-drain” is dominating popular discourse on high-skilled migration, since official education statistics have shown that the number of Algerian students and young graduates who left their country in search of a better life and better opportunities has increased significantly especially in recent years. The U.K. universities have been a particularly popular destination for these students. According to statistics collected from https://www.studying-in-uk.org, the number of Algerian students attending U.K. universities in the past three academic years has increased by 67% from 275 to 460.

According to the World Bank’s annual report regarding Algeria’s Economic Outlook, unemployment in the African country has increased significantly, particularly among the educated, youth and women. Tunisia, for example, has only a low rate of 15% of youth unemployment although it is almost 15 times smaller than Algeria and has far fewer natural resources to support its economy.

There is an alarming sentiment regarding the skilled migration of those who want to pursue their careers, but feel discouraged by a system that offers low-paid jobs and little opportunity. Nearly 15,000 Algerian doctors work in France now and 4,000 submitted applications to leave their home country last year, according to official figures.

A social pedagogy, however, is needed to stop the hemorrhage of skilled migration, a means of retaining those looking for a decent life, but giving full measure of their talents to make a killing in countries like Qatar and UAE. The well-understood contribution of this highly skilled diaspora, pilots, doctors and engineers, journalists and others could only be an asset in the aftermath of the ongoing Hirak and the desire for change wanted by million of Algerians.

Thus the real question that the skilled diaspora raises is, how it will fit in the new Algeria post-Bouteflika clan system, will it play a leading role in the country’s decision making process shaping imperatives and objectives regarding education, training and employment — this systemic approach of assessing core values of learning and leadership might clash with the country’s laws and regulations because of their dual nationality.

In 2016 there was a debate over Algerians born or residing abroad could access high functions of the State and the highest office in the nation; on this stance 87-1 of the Constitution states to run for President, the candidate shall not acquire foreign nationality.

This goes with any high position in the Republic, though, officially, ex-President Bouteflika ordered the law would determine the list of those positions. The ex-President’s amendment does not specify the lifting of these restrictions. But high skilled Algerians holding double nationality are ready to give away their acquired nationality for the sake of their origin nationality, as a French-Algerian physician who prefers to remain anonymous told ADN.

The circumstance of departures abroad has slowed lately because of the Hirak’s dynamic of renewed hope, but the temptation is growing strongly particularly if the in-coming President and his administration don’t tackle the thorny issues of education and employment affecting young graduates. Those who are most proactive and enterprising in Algeria, and those of the diaspora and their children who are settled in their adopted countries in exile, are all looking forward to playing a key role in wealth generation, innovation and growth.

All that being said, New Algeria’s competent leaders need to act fast otherwise the country faces a deepening threat of a potential “brain-drain,” which in the long-term would have a negative and possibly irreversible effect on the national economy, leaving professional individuals and skilled manpower in short supply.

First Islamic Constitution: The Constitution of Medina
‘A vast expansion of the mission’
Comment