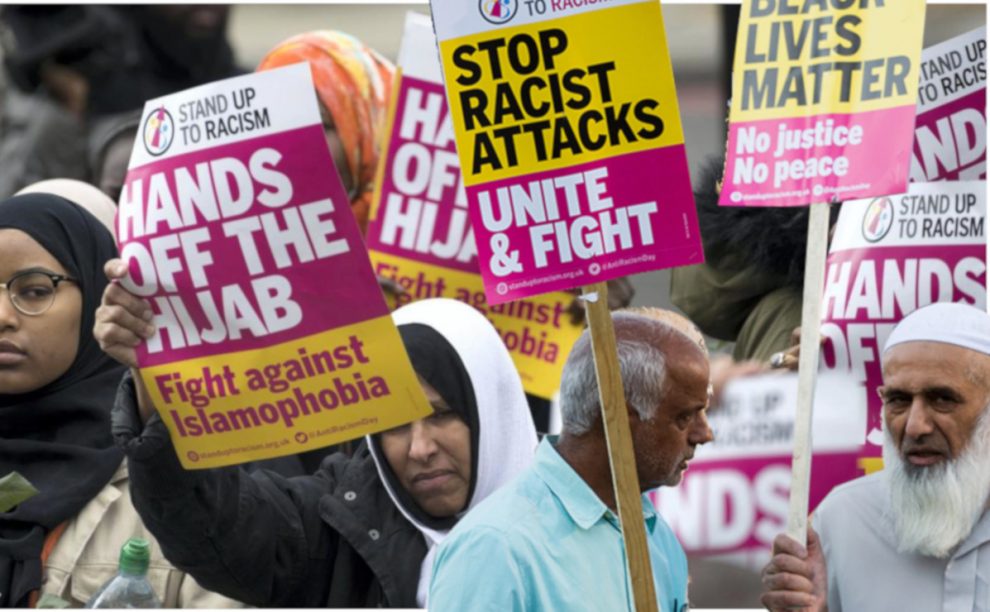 Defining anti-Muslim sentiment in Europe is not just about confronting hatred, it’s also about understanding the deep institutional currents that fan anti-Muslim discourse.

After more than two years of consultation, including interviews with academics, charities, politicians and the wider Muslim community, a group of MPs in the UK will attempt to put forward a working definition of ‘Islamophobia’.

The All Party Parliamentary Group (APPG) that initiated the process consists of a group of MPs across party lines.

The report notes that even as the UK government has made a mild effort to tackle Islamophobia, “there has been no attempt to adopt a definition of Islamophobia by Government despite recognising the significant impact the problem has on British Muslim communities”.

Under the current Conservative Party government the Muslim community has often felt neglected, and at worst, placed in the crosshairs of a state-led effort to institutionalise the ‘othering’ of Muslims.

How is Islamophobia defined?

The term Islamophobia has gained increasing political currency over the last decade.

The APPG has put forward the following definition of the term: “Islamophobia is rooted in racism and is a type of racism that targets expressions of Muslimness or perceived Muslimness.”

For proponents of the definition, albeit not perfect, has made strides towards addressing how anti-Muslim sentiment has become widespread and more importantly leaves the door open to addressing institutional Islamophobia.

Dr Katy Sian a Lecturer of Sociology at the University of York told TRT Worldshe believes the current proposed definition marks a radical departure from previous definitions. She said: “[It] moves it away from individual biases and prejudices to a more critical and analytical understanding. By showing its links with racism it is showing Islamophobia’s structural nature.”

In the immediate period after the ‘War on Terror’, the US and UK in particular set about implementing a set of policies that had the impact of silencing Muslim opinion and damping social activism.

Had these practices been applied to a particular ethnic group they would have been considered a form of racism but Islamophobia has no set definition and in particular no legally acceptable definition, making such intrusive policing acceptable and institutionalised.

Professor Salman Sayyid from Leeds University proposed the APPG’s definition of Islamophobia alongside his colleague Abdoolkarim Vakil at King’s College. They have argued that government policies have surreptitiously exploited the lack of clear definitions to push policies that would otherwise be considered discriminatory.

Sayyid has laid out his rationale for the development of racial policies on a religious community. He explained: “Because Muslims are not a race the systemic violations directed against them cannot be racially motivated. Because Muslims are not a race their subjugation is not racism.” However, the current definition, if adopted by the government and introduced in legislation, would go some way to addressing this disparity.

Linda Hyokki, Senior Research Associate at the Center for Islam and Global Affairs at Istanbul Sabahattin Zaim University, spoke to TRT World, arguing that the current working definition has the potential of moving the debate away “from the everlasting disputes about whether or not the term ‘Islamophobia’ is suitable for its intended purpose”.

In the past, the debate has been muddied, mainly by right-wing opponents. According to Hyokki, they argue: “Because it is called a ‘phobia’, it would only denote a fear of Muslims and as such would not make sense because the way in which people think of Muslims and behave towards Muslims could not be compared to other phobias, which are oftentimes clinical conditions.”

Anti-Muslim sentiment, when viewed in these terms, is far from being an irrational fear of Islam. It is a deliberate, institutional and systemic approach towards the Muslim community’s set of beliefs and practices.

A recent poll showed that a majority of people in Western Europe were in favour of restrictions on Muslim women’s religious attire – and where public sentiment has moved in that direction, so have the laws of those countries.

In August of this year, Denmark became the latest Western European country to ban Muslim women from wearing the face veil following Austria, Belgium and France, as well as parts of Italy and Spain who have enacted similar laws over the last decade.

“Muslims are constantly used as a punching bag by the UK mainstream media, with news articles frequently referring to Muslim communities as being illiberal, backwards and a threat to the West,” said a spokesman for Muslim Engagement and Development (MEND) to TRT World, a UK-based NGO focusing on media monitoring.

These developments also reflect a wider trend across the western world to see limits on Muslim migration, not just in light of US President Donald Trump, but as part of a growing atmosphere of hostility towards Muslims.

In a 2006 speech Douglas Murray, a leading British journalist and author well positioned to advise policymakers and government officials stated: “Conditions for Muslims in Europe must be made harder across the board: Europe must look like a less attractive proposition. We in Europe owe – after all – no special dues to Islam.”

Who did Kemal Kilicdaroglu Want to Please with his Germany Visit?
Trump’s ‘greatness’
Comment