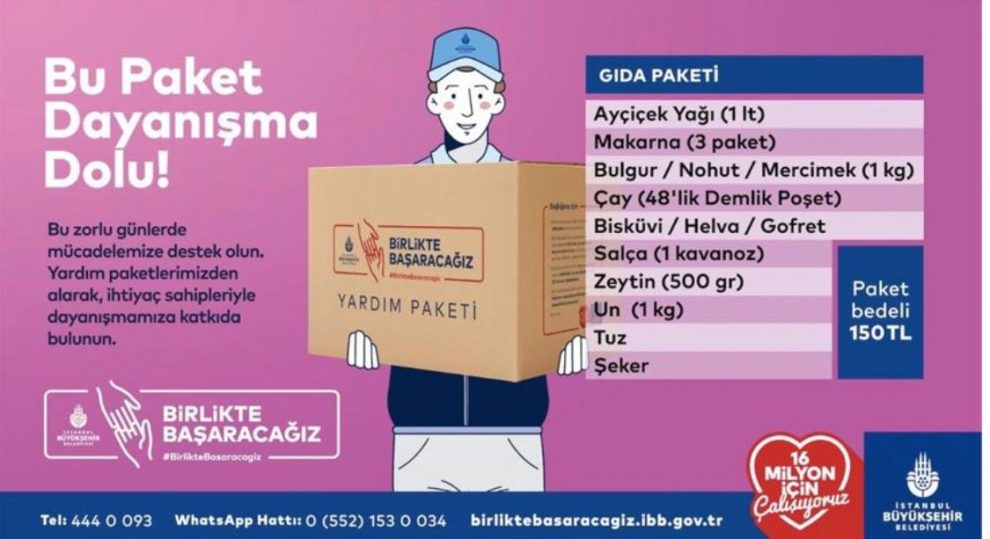 Since Turkish government asked the citizens to stay home as much as possible to eradicate novel Coronavirus, Turkey’s civilian movement decreased around 90 percent. Several sectors closed doors for business leaving perhaps hundreds of thousands people with no steady income. As many other NGOs, Istanbul Grater Municipality launched a campaign to reach out those in need of help. Controversial mayor Ekrem Imamoglu administration asked philanthropist Turks to donate 150 Lira ($23) to provide a food package for those in need. But a quick online check revealed imamoglu administration was cashing-in on Coronavirus sufferings.

“I can prepare the same package here for about 90 lira,” said Mustafa Kilic, a 29 years old clerk at a national budget-market in Ankara. That is more than 40 percent less than what Istanbul administration is asking for. The aid package Imamoglu administration pledge to prepare has variety of items from salt to sugar and spaghetti.

Ekrem imamoglu was quoted by the state news agency saying that his administration aimed to receive up to 300 thousand boxes worth of donations. And another businessman says making such large quantity as a wholesale, the cost of the package could go down to even 70 Lira. A simple math calculation reveal that the Imamoglu administration could profit at least 20 million Lira (roughly 3 million dollars)

Imamoglu administration has been calling on the government to impose a curfew at least in Istanbul to contain tye spread of Corona virus. Nearly a fifth of Turkey’s population live in Istanbul. “When you stop 15 million people in one city from moving around, it will be easier to fight the virus,” Imamoglu said during an interview. The mayor if Turkey’s third largest city, Izmir, also joined his fellow party member Imamoglu on asking for a curfew. Izmir mayor Tunc Soyer also said a curfew was necessary in his city.

Turkey’s most popular anti-government anchor Fatih Portakal accused the government on his show on March 31st for choosing production over public health by not imposing a curfew. However, experts warn that a curfew could break the production chain and cause bigger social and health problems. “For public health, production of food, medicine and health equipment is a must,” an expert warned. And those are the essential business that are mostly still open in Turkey. The rest have been gradually shot down by the government.