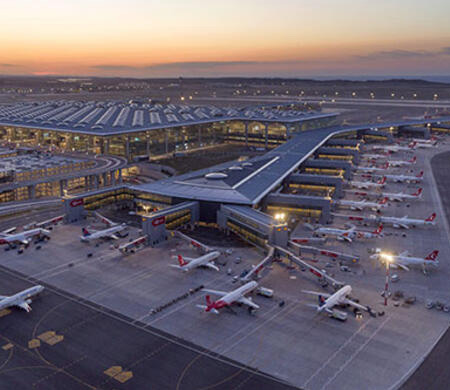 Istanbul Airport has become the busiest European airport in terms of passenger numbers just one year after it was completed removing the crown from London’s Heathrow, Bloomberg reported on Monday. Istanbul Airport hosted 23,4 million passengers in its first full calendar year as airline industry has dealt a huge blow in light of the travel curbs to contain the deadly coronavirus pandemic.

Most major European airports suffered more than 70 percent passenger loss since the beginning of the pandemic while Istanbul Airport took the first place in Europe as Turkish government and the flag carrier Turkish Airlines managed the crisis better than its peers. Moscow Sheremetyevo also reported smaller declines, thus rising in the ranks.

Paris-Charles de Gaulle, the second-busiest airport in Europe during 2019, stood slightly ahead of its London rival as of the first 11 months of 2020. It reports its full-year data later.

New lockdowns as the more deadly second wave of the virus has hardly hit the European countries are expected to further reduce the number of travelers.

Istanbul’s other airport, Sabiha Gokcen has also made its way to the list from impressing eight spot making Turkey one of the countries having two airports in the top 10.

Turkey has built Istanbul Airport with over €22 billion investment after several controversial rejections from environmentalist groups. When the all the stages are completed, it is estimated to hold over 200 million passengers annually.