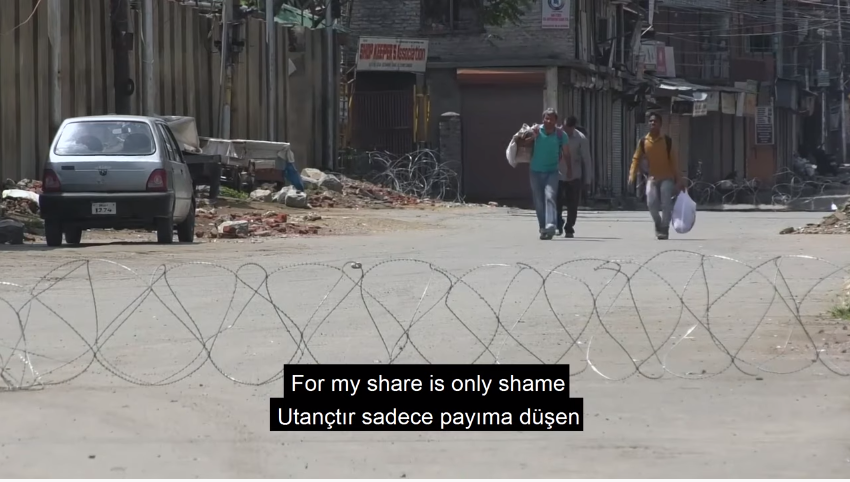 ANKARA – A first of its kind, a song composed by Turkish lyricist dedicated to Kashmir was released globally on Wednesday.

Turgay Evren, Istanbul-based poet, English language lecturer and a composer by profession, said the song was “dedicated to all oppressed people of the world”.

World famous Della Miles, who is now settled in Turkey, Germany and United States, has given her melodious voice to song which is trending on social media with thanks giving messages to producers and Turkey for support on Kashmir.

“#Kashmir “Kashmir Is My Name”!… This song, written by me and performed by Della Miles, the world famous American singer known as Michael Jackson’s and Whitney Houston’s vocalist, goes to all oppressed people of the world, deprived of freedom and justice,” Evren said in a Twitter post.

The song was first released on Twitter and YouTube by Aziz Babuscu, who is a member of Turkey’s Grand National Assembly where he represents ruling AK (Justice and Development) Party from Istanbul.

In a twitter post, Babuscu said: “Kashmir is one of our steps… Like Jerusalem, like Sarajevo, Arakan [Rohingya], Aleppo. We know the songs of the oppressed best. #Keşmir’s [Kashmir] songs speak of death, massacre.”

A disputed territory between Pakistan and India, people have rebelled against Indian rule and also picked arms to seek complete demilitarization to pave way for plebiscite.

The Indian-administered Kashmir is witnessing unrelenting conflict for over 70 years now. For last four decades, conflict has consumed nearly 100,000 people including civilians in the region.

There are nearly 18 resolutions in United Nations that promise right to self-determination to the people living in Kashmir parts controlled by Pakistan and India. But the resolution are yet to be implemented and Pakistan has accused India of scuttling the efforts.

Soon after the song was released, Kashmiris across the globe wrote messages of love, happiness and solidarity with producers and Turkey.

Most of the social media users used popular “EyvAllah” – thank you – dialect from world famous Turkish TV series “Resurrection Ertugrul” which has generated a lot of interest in Kashmir and Pakistan after it was dubbed in Urdu and telecast by state-run Pakistan Television from Ist Ramadan this year.

The song released by Babuscu and Evren is apparently first by any non-Kashmiri or non-Pakistani to pay regards to Kashmir struggle.

“Kashmir is my name – massacre again, and again; death is my fame” song has used videos of anti-India uprising from Kashmir showing people raising slogans of freedom, and funerals of people killed by Indian forces.

Speaking to Straturka.com, Evren said he knew Kashmir issue since his High School days. “From time to time, I heard people were resisting occupation and there was lot of news about torture committed on Kashmiris,” he said.

“But last 10 months have been heartbreaking,” Evren said. “Life [in Kashmir] has been very difficult… there was no internet, now it is limited access.”

He said it was Babuscu who initiated and coordinated this project.

“As a human being, we felt there was a need to do something to raise voice of oppressed people [of Kashmir],” he said.

Linking ongoing George Flyod protests in United States to Kashmir, Evren said: “it is every day that people in Kashmir experience humiliation like what happened to George Flyod.”

Flyod was killed by US cops last month after being kneeled down triggering mass protests against discrimination with black community in the country.

About production of the song, Evren said Della Miles, who is an Afro-American, was in Istanbul for a TV show where she recorded the song.

#Kashmir “Kashmir Is My Name”!…This song, written by me and performed by Della Miles, the world famous American singer known as Michael Jackson’s and Whitney Houston’s vocalist, goes to all oppressed people of the world, deprived of freedom and justice. https://t.co/N8Bisud5VC

Los Angeles-based Ali Tolga Demirtas, who is from Turkey, is music director of the song, he said.

“It was a joint effort laced with concern and love,” he said.

The situation turned tough in Kashmir ahead of August 05, 2019 when India scrapped so-called limited autonomy guaranteed to the region under Indian constitution.

India boosted her military deployment in the region to nearly 1 million troops in the disputed territory – which is world’s highest militarized zone. A communications blackout was imposed to stop news coming out of the region which has slowly been lifted.