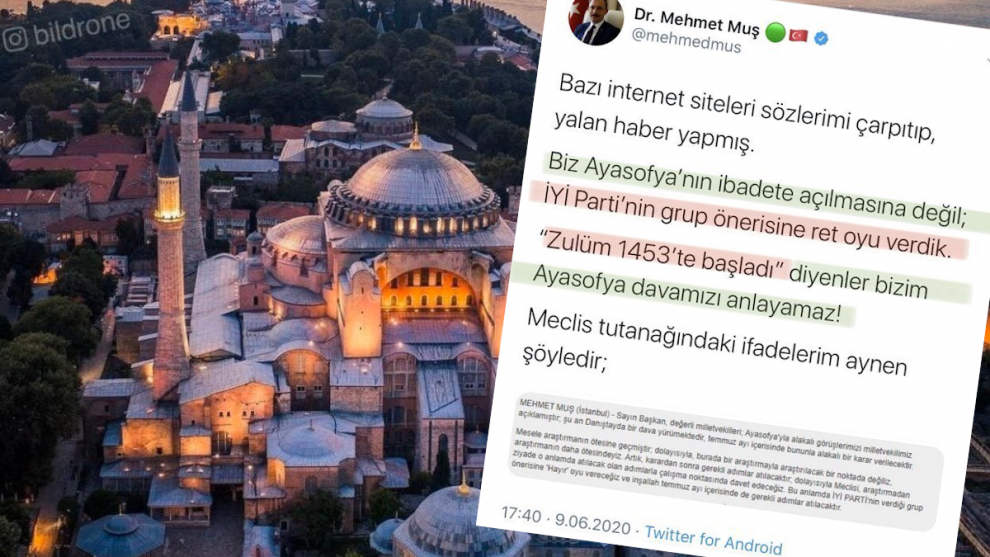 Turkey’s ultra-nationalist anti-refugee IYI party claimed on Tuesday that it submitted a motion to the Turkish Parliament to reopen Hagia Sophia as a mosque but governing Ak Party rejected it which was quickly circulated on the social media after being picked up by anti-government media. But the truth was completely different.

Turkish president Erdogan has recently said that his government has been looking into options to reinstate Hagia Sophia’s status as a mosque. Turkish opposition seems like the largest block even before Greece to prevent the historic structure from becoming a Muslim worship place again.

Turkey’s ultra-nationalist IYI party submitted a motion to the Turkish Parliament on Tuesday about Hagia Sophia which was rejected by the members of Erdogan’s Ak Party. IYI party claimed that the motion was to reopen Hagia Sophia as a mosque and Ak Party members rejected it. IYI party officials including its leader Meral Aksener launched a campaign right after the voting that Ak Party did not really wanted to convert Hagia Sophia back into a mosque but rather wants to abuse the subject politically. “We dropped their masks” was the tag used on IYI party’s official Twitter feed.

However, the truth was quite different. What IYI party submitted to the Parliament was to form a commission to investigate the Hagia Sophia mater not actually reopening it as a mosque. Senior Ak Party official Bulent Turan condemn IYI party in a Twitter post. “We did not vote to reject reopening Hagia Sophia, we rejected forming a commission to investigate the matter,” said Turan. It’s crystal clear, there is nothing to study about it, Turan reiterated.

Turkey’s newly founded Deva and Gelecek Parties have also criticized any attempt to convert Hagia Sophia back into a mosque. Leaders of both Ak Party splinter parties said it was being abused as a political tool by Erdogan’s government.