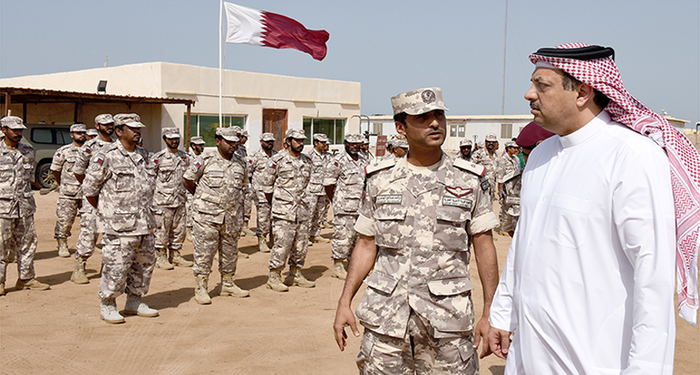 In a cabinet reshuffle in January 2016, Emir of Qatar, Sheikh Tamim bin Hamad al-Thani, named his then Minister of Foreign Affairs, Khalid al-Attiyah, as a State Minister of Defense. Attiyah started his career as a fighter pilot and served in Qatar’s air force from 1987 to 1995. After his appointment, the new Defense Minister made plans to develop a professional modern army as well as a defense industry capable of producing Qatar-made defense products, mainly in land-based defense field.

Undoubtedly, this is an ambitious goal for Qatar, but not an impossible one. Given that such initiatives would require overhauling the Qatari military, major investments, large-scale military procurements, and sufficient time, Atiyyah began work immediately after becoming State Minister of Defense.

During the first year of his new post, Attiyah opened new military facilities, negotiated primarily defense contracts, and increased the scope of Qatar’s cooperation with other countries. These plans became a necessity in Summer 2017 with the start of Gulf crisis when according to Qataris, Doha feared an invasion by the Saudi-led bloc.

In terms of geography and demography, Qatar is considered a small state, especially in comparison with its two neighboring giants, Saudi Arabia to the West and Iran to the East. Such geography has forced Doha to rely more on careful diplomatic balancing acts to secure its national security and interests. For example, prior to the ongoing Gulf dispute, Qatar aligned with Saudi Arabia on a host of regional issues such as Syria and Yemen. While Doha also advocated for greater dialogue between the GCC states and Iran, it voted against international economic sanctions on Iran’s nuclear program back in 2006 when Qatar was a non-permanent member of the UN Security Council.

At the beginning of the GCC crisis, the balance of power weighed heavily on the side of the quartet. Caught by surprise, Doha was vulnerable at all levels. Had the quartet taken military action against Doha, the Qataris alone would have been unable to defend their country.

According to the Qataris, Turkey deployed its troops to Doha as Turks were aware of the Saudi/UAE-led bloc’s intentions. The decision was decisive in preventing the crisis from escalating militarily, and it gave Qatar the time needed to initiate a diplomatic military procurement campaign among other initiatives.

According to one AFP report, Doha has announced military contracts worth around $25 billion in the last eight months, marking a historic shift in Qatar’s defense spending. This fact raises two major questions. First, why would Qatar increase defense spending if the quartet has much larger military arsenals? Second, why would Qatar need to grow its indigenous military might if the US has 11,000 troops at the al-Udeid base near the country’s capital?

To survive in a hostile environment, small states –including Qatar- usually adopt a strategy different from those of bigger powers. These strategies may include, separately or collectively, relying on international organizations, effective hedging, and alliances.

Each of these strategies come with pros and cons, but what is more important is that they all usually work well until the small country faces an act of aggression which exceeds its defense capabilities. If the small state is solely relying on one of these strategies when it faces such an imminent threat without a plan B, it will be doomed.

In the recent GCC Crisis, Qatar would have needed time if it were depending on international organizations for help, and since turning to Iran for effective hedging was not possible, Doha was left at the mercy of its alliance with the US.

Usually, al-Udeid, housing the largest American military base in the region, would have been a sufficient deterrent against foreign threats. However, Trump’s position in opposition to Qatar—stated on Twitter at the crisis’ onset, coupled with UAE’s effort to convince Americans to move their military base out of Qatar, made the Washington-Doha alliance appear shaky despite opposing signals from the State Department and Pentagon.

Instead, the small Gulf country initiated military procurement diplomacy and poured billions of dollars of its financial wealth into the economies of its weapons suppliers, trying to fast-track a route to the protection/influence of the major world powers. Most of the military contracts went to Doha’s Western allies, mainly the US, France, Britain, Italy, and Germany. Yet others went to China and Turkey. Moreover, Qatar has expressed interest in buying Russia’s S-400 air-defense system.

Qatar’s political strategy in awarding contracts to countries such as Britain, Germany and France was to reward them for not backing the quartet amid the GCC crisis, while contracts signed with the US were meant to dilute the tilt of Trump’s position towards Saudi Arabia and UAE and reaffirm Doha’s strategic partnership with Washington.

A Genuine Need for Security

Another reason for the huge military buildup was Qatar’s genuine need for protection, and professional armed forces equipped with high tech arms amid the rising conventional and unconventional threats to the Gulf state’s national security. There were other considerations for increasing defense spending and the amount of the military procurements. These considerations included, but were not limited to, hosting the 2022 World Cup, which requires a high level of security.

When it comes to Qatar’s military capacity, the Gulf country looked to enhance military capabilities to project power beyond its borders when needed, similar to the Qataris’ participation in enforcing the no-fly zone in Libya with its aging Mirage 2000s and its participation in the Saudi-led coalition in Yemen by sending 1,000 troops.

Qatar’s ambitious mission and its increasing contribution in countering terrorism demanded high levels of defense spending and new military procurements. Yet, Doha’s overall defense spending and military imports remain substantially lower than those of Saudi Arabia and the UAE. Of course, Qatar’s military buildup comes with its own challenges with which it has yet to address.

The year 2014 witnessed an important conjuncture of these specific issues. At that time, Saudi Arabia, the UAE, and Bahrain recalled their ambassadors from Doha to pressure Qatar into changing key pillars of Doha’s foreign policy. The Qatari officials believe that the Saudi-led alliance had “complete plans” to invade Qatar. In an interview with the then Minister of Defense on the national TV, Attiya said that Saudi Arabia, the UAE, and Bahrain had deployed troops along the border of his country, adding that they had planned to invade Qatar before eventually pulling back from the frontier.

The perceived threat of other Gulf states waging military action against Qatar is probably one reason why Doha signed a defense agreement with Ankara at the end of 2014. The 2017/2018 GCC crisis, however, has given Doha the chance to accelerate its massive military buildup, mainly focusing on high-tech weapons and advanced air, naval, and land capabilities.

From a military perspective, the GCC crisis highlighted a serious deficiency in Qatar’s self-reliance strategy. As Steve Coll put it, Qatar the small oil-rich country in the desert “looked like a bank waiting to be robbed”. Moreover, despite its crucial role in providing a layer of protection to Qatar, the al-Udeid base did not prevent the ongoing GCC crisis. In this sense, these mega military procurements are expected to fill the gap in Qatar’s self-reliance strategy.

The idea is that if the alliance strategy fails for any reason at any point in the future, these weapons would serve as an insurance policy that would provide the time needed for international organizations or other powers to intervene in Doha’s defense.

While these weapons might not provide full protection against a great power aggression, they are expected to promote Qatar’s self-reliance strategy which will help the small Gulf country to firmly resist the dictations coming from larger countries.

New frontier: The Mediterranean or Black Sea
Turkey Is Quietly Building Its Presence In Africa
Comment