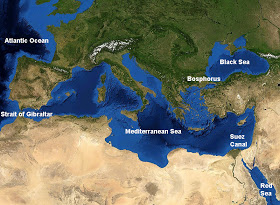 We the people of Turkey, look mostly into the cover rather than reading what’s inside. When the USS Carney (DDG-64), a guided-missile destroyer of the United States Navy, passed through the Istanbul Strait on Feb. 17, 2018 with the gunner’s finger on the trigger of his 12.7 mm caliber Browning Machine Gun (BMG) M2 (Ma Deuce) and when his picture with the picturesque Bosporus in the background was shared on social networks, we looked at it and wondered why a “friend and ally” America was doing the same thing the Russians did two years ago.

Nowadays the Russians sail through the straits at ease, no gunner on the deck. On Twitter some anti-government and anti-American journalists expressed their opinion to the extent that Turkey should leave the NATO and declare war on them.

If we, the veterans of the old and the new media, paid a little more attention and saw the text next to the photograph, we would have noticed that the show of the finger-on-trigger was not meant us, but it was for the Russians.

Peter Halvorsen, commanding officer of the destroyer said, “The USS Carney entered the Black Sea to conduct maritime security operations and enhance regional maritime stability, as well as strengthen combined readiness and naval capability among NATO allies and partners. The U.S. Navy has a history of building relationships with our partners in the Black Sea, which both demonstrates our combined commitment to regional security and enhances overall peace and stability.”

The very next day, Russia announced its own naval deployments to the area, and a Russian frigate and two patrol ships entered the Black Sea for a series of exercises. The unnamed U.S. naval officers continued to tease the Russians on CNN, “You get ships up in the Black Sea that makes the Russians feel more threatened.”

However all of this is no joke according to Tyler Durden of the Zero Hedge Report: it shows us that the Black Sea is the new area of contention for the U.S. and Russia. He reminded readers that since the military escalation in Ukraine in 2014, there have been several skirmishes between Russian and U.S. forces.

On the other end of the Anatolian straits lies the Mediterranean, as the majority of nations call it the middle sea (for Turks and Arabs, it is the white sea). According to Ardan Zentürk of the Star daily newspaper, the Congressional alliance between the American Jewish Committee (AJC) and the Hellenic-American Leadership Council (HALC) is now flexing its muscles after Turkey chased away some exploration vessels from its exclusive economic zone in the eastern Mediterranean region.

Mr. Zentürk sees cooperation budding between Israel, Greece and multinational U.S. corporations interested in the natural gas sources in the area. He writes that Cyprus and the eastern Mediterranean region is the next area that is going to get warmer.

After the USS Carney entered the deep and cold waters of the Black Sea, the U.S. 6th Fleet, headquartered in Naples, Italy, announced that some of its ships would conduct “a full spectrum of naval operations, in concert with joint, allied and interagency partners, to advance U.S. national interests and security and stability in Europe and Africa.” CNN had reported that the U.S. Navy’s ships were headed to the contented exclusive economic zones.

We, the people of Turkey, are now reading the subtext buried in this picture. The friend, an ally, is putting his finger on a much larger trigger this time around