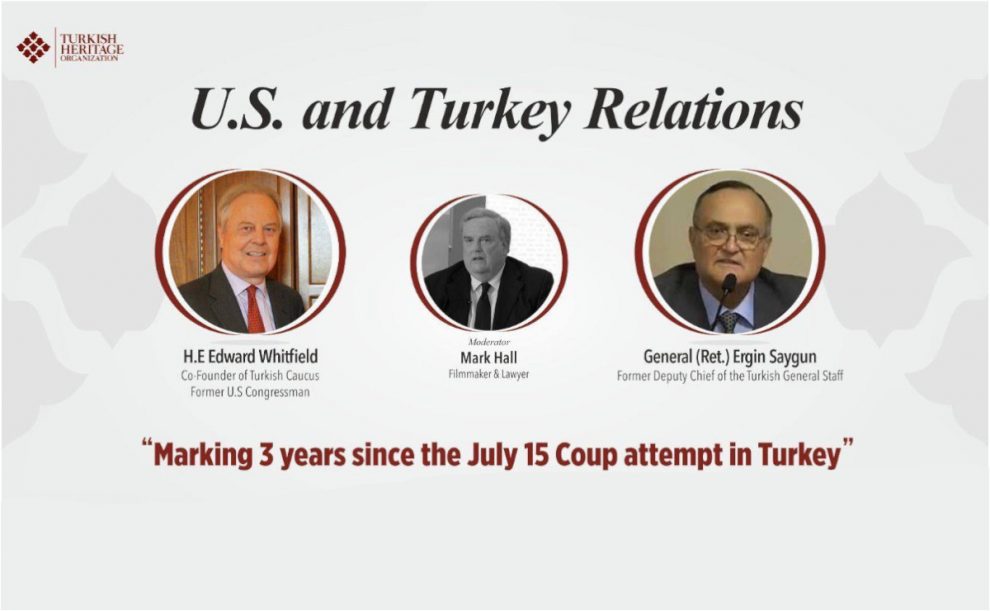 THO hosted a panel discussion examining U.S. and Turkey Relations while also recognizing the shifting nature of U.S.-Turkey relationships in the three years since the July 15 coup attempt in Turkey.

On Monday, July 15, 2019 the Turkish Heritage Organization (THO) hosted a panel discussion examining U.S. and Turkey Relations while also recognizing the shifting nature of U.S.-Turkey relationships in the three years since the July 15 coup attempt in Turkey. The event began with opening remarks from THO President Ali Cinar and Ambassador Serdar Kilic to analyze current U.S.-Turkish relations and pay tribute to the victims of the July 15th Coup Attempt.

Our event featured Former Deputy Chief of the Turkish General Staff, General (ret.) Ergin Saygun and Co-Founder of the Turkish Caucus and Former U.S. Congressman, H.E. Edward Whitefield. The panel was hosted by Mark Hall, Producer of the Documentary, “Killing Ed.”
Our panel opened with the first question, on the current status and background on the U.S.-Turkish relationship, from Mark Hall to former Congressman Whitfield. Whitfield discussed that “we are in uncharted waters in the U.S.-Turkish bilateral relationship with the delivery of the S-400s to Turkey recently…As long as we have the opportunity though to keep talking with one another it will take time but we will rebuild.”

Next, Hall turns to General (ret.) Ergin Saygun, to discuss the impact of the delivery of the S-400s to Turkey on the U.S.-Turkey relationship. The delivery of the Russian S-400 system, as interpreted by NATO and American officials will operate as Turkey’s basis for their air defense system, but also serve as a Russian intelligence collection platform. Saygun shares detailed background information, and recognizes that it is critical to eliminate the threats arising from the U.S. sanctions and other actions to Turkey in the interest of promoting the U.S.-Turkey NATO alliance. Providing the Turkish perspective, Saygun further notes that it is not in the “spirit of the NATO alliance” to sanction Turkey. Contrasty, the American perspective was discussed in that the S-400 and F-35 systems are entirely incompatible. Saygun further shared that “as a military man, I have to defend myself. If we are adversaries, then I am not going to defend myself against the U.S. with U.S. hardware,” showing an even more complicated perspective into the U.S.-Turkish defense relationship.

Additionally, the panel discussed other aspects that greatly influence the U.S.-Turkish relationship including the PKK/YPG issue. While Saygun comments that “the PKK is a terrorist organization and accepted as a terrorist organization by the U.S., the U.S. still supports this group.” Mark Hall replied to this that “as Americans we can probably agree that we have heard wanton comments and obviously General Saygun has a country to protect. But the Americans and Turkish people alike agree that the PKK is a terrorist organization.” Whitfield provides the context that led to the U.S. involvement with the YPG in that the “U.S. military most likely viewed ISIS as a greater threat to the U.S. at that moment” than the YPG. Whitfield continued that “we have cultural events but my advice moving forward is that we must keep the dialogue open with military, political and citizenship dialogue as well for this relationship to move forward.” Our panel also engaged with questions from a full audience at the National Press Club discussing the varying influences on the U.S.-Turkey relationship. THO would also like to thank Turkish Airlines and Turkcell for sponsoring our July 15th event.