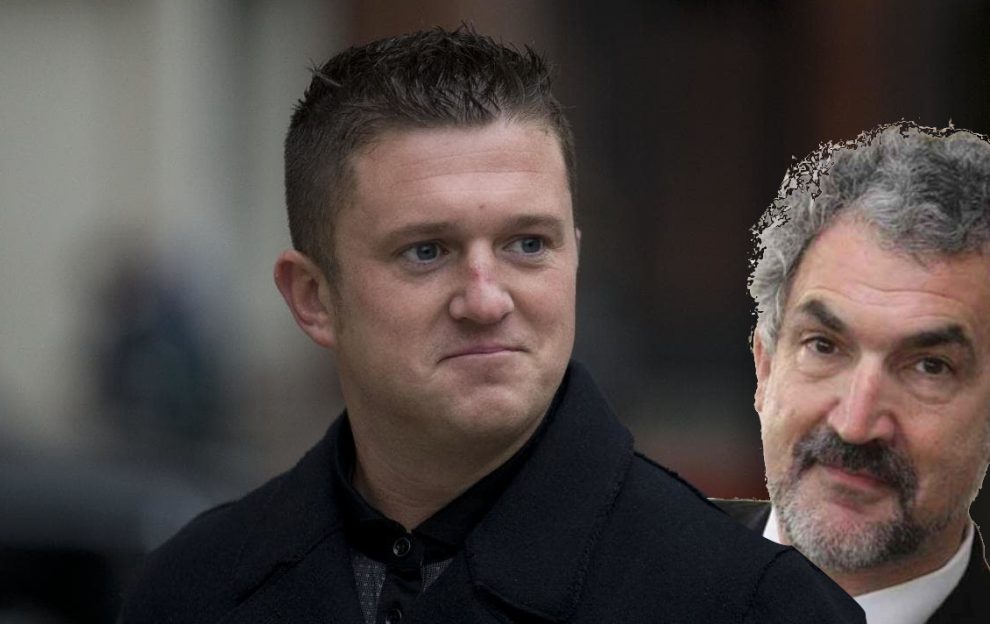 A pro-Israel thinktank with a reputation for Islamophobia is funding a campaign in Britain to release Tommy Robinson, a far-right agitator currently serving a jail sentence for disrupting a court case.

1. Legally, by funding his defence costs;

3. Politically, by “organising and funding” demonstrations in London.

MEF says it provided all the funding for a “Free Tommy Robinson” demonstration in London on June 9, which it also helped to organise. Eight people were arrested and five police injured when the demonstration turned violent.

A second demonstration, last Saturday, which MEF claims to have sponsored and organised, also turned violent and 12 people were arrested. On that occasion “Free Tommy Robinson” demonstrators were joined by others demonstrating in favour of Donald Trump.

MEF’s announcement gave no details of its “diplomatic” activity on Robinson’s behalf but on Saturday it was reported that Sam Brownback, the Trump administration’s Ambassador-at-Large for International Religious Freedom, had raised the Robinson case with the British ambassador in Washington. According to Reuters news agency Brownback said that if Britain did not treat Robinson more sympathetically, the Trump administration “might be compelled to criticise Britain’s handling of the case”.

It’s unclear whether Brownback was acting on his own initiative, though he does have connections with MEF’s founder, Daniel Pipes. They are both “presidium” members of The Jerusalem Summit, a US-based organisation which opposes a Palestinian state on the grounds that Palestinians are “unwilling and incapable of achieving and maintaining statehood”.

Why Robinson is in jail

Tommy Robinson, whose real name is Stephen Yaxley-Lennon, has been involved with various far-right groups in Britain. He is a former member of the British National Party, the British Freedom Party and the English Defence League. More recently he set up a British branch of Pegida (“Patriotic Europeans Against the Islamisation of the West”).

Robinson is a thug with a string of previous convictions which include “threatening, abusive or insulting behaviour“, common assault, using someone else’s passport to travel to the United States where he had been banned because of a drugs offence, and conspiracy to commit fraud in connection with a mortgage application.

Last year he was given a three-month suspended sentence for contempt of court after attempting to film four Asian defendants at a trial in Canterbury and referring to them – ahead of the verdict – as “Muslim paedophiles”.

In May this year he was arrested again after live-streaming to Facebook from outside Leeds crown court where he is reported to have made comments that risked causing a trial to collapse. He pleaded guilty to contempt of court and received a 10-month jail sentence plus the three months of his previously suspended sentence. He is now appealing and the case is due to be heard on Wednesday.

As a result of his imprisonment Robinson’s supporters launched a campaign for his release. They claimed his right to free speech had been suppressed, though the real problem was that his actions were interfering with the course of justice.

In the interests of a fair trial, English law imposes some restrictions on what can be said about a case until a verdict has been announced. The basic principle is that juries should reach their verdict based on the evidence heard in court – and nothing else. Journalists and others are normally free to report what is said in court but, while the trial is in progress, public discussion or commentary of a kind that might influence the jury is not allowed.

That, basically, is why Robinson fell foul of the law in last year’s Canterbury case, where the judge told him:

The more recent case in Leeds which led to Robinson’s jailing is more complicated because it is said to be subject to a “postponement order” which means nothing can be reported for the time being. An article on The Secret Barrister website explains:

“Postponement orders are not unusual, particularly where there are a series of linked trials – for example, where allegations of drug networks involving 30 defendants are concerned, there will be several trials (it not being physically possible to accommodate 30 defendants in a single courtroom). To avoid jurors having their deliberations contaminated by what they might read or hear about the earlier linked trials, reporting of all of them is often postponed until the end.”

However, such considerations don’t seem to bother MEF which says Robinson has “long been a target of the UK authorities impatient with his criticism of Islamism”.

‘The Muslims are coming’

The founder and president of MEF is Daniel Pipes who started off as an academic and has a PhD in medieval Islamic history. In 1990 he achieved some notoriety with an article for the National Review magazine headed “The Muslims are coming! The Muslims are coming!”. It included this sentence:

“Western European societies are unprepared for the massive immigration of brown-skinned peoples cooking strange foods and maintaining different standards of hygiene … All immigrants bring exotic customs and attitudes, but Muslim customs are more troublesome than most.”

Pipes later said he did not write the headline and claimed that in writing about “brown-skinned peoples” and their “strange foods” he had been describing the attitudes of Western Europeans rather than giving his own views.

In the early 2000s, MEF was one of several inter-connected thinktanks in the US pushing for war with Iraq. Among the “experts” listed on its website at the time was Judith Miller, a New York Times reporter – subsequently disgraced – who churned out scare stories about Iraq’s alleged weapons of mass destruction (see here and here).

MEF says it provides “educational outreach” with speakers who “delve deep into critical issues, surpassing what is found in mass media”. It also offers “in-person briefings, and conference calls featuring its staff and fellows, former government officials, scholars, journalists, and others with insights into the Middle East and Islamism.” One of its current sources of “insight” is Raheem Kassam, a former adviser to Nigel Farage of UKIP/Brexit fame. Until recently Kassam was head of Breitbart’s London operation and he is currently listed as a “writing fellow” with MEF.

Among its other activities, MEF publishes the Middle East Quarterly which, in the latest issue, has an article about the “privileged” status of Palestinian refugees. It also runs Campus Watch which reports on “bias” among professors in American universities who teach about the Middle East. It issues a list of “recommended professors” and another list of “professors to avoid” (mostly those who are critical of Israel).

In an area that’s more relevant to the Robinson affair, MEF says it “will actively stand with and defend any individual facing the threat of government harassment, fines, or imprisonment because of their stance against Islamism”. For that purpose, it set up The Legal Project which raises funds to cover court costs and maintains “an international network of attorneys dedicated to working pro bono in the defence of free speech”.

The Legal Project’s website has a testimonial from Geert Wilders, the Dutch Islamophobe who was cleared of hate speech charges in 2011. Wilders writes:

“This important victory could not have been achieved without the support and help of many friends in the Netherlands and abroad. The Middle East Forum’s Legal Project in particular was always there to help, advise and assist. Whenever needed, I could always count on its support. The importance of the MEF’s Legal Project in reclaiming free expression and political discourse in the Netherlands against the encroachment of ‘hate speech’ and incitement laws, cannot be overestimated.”