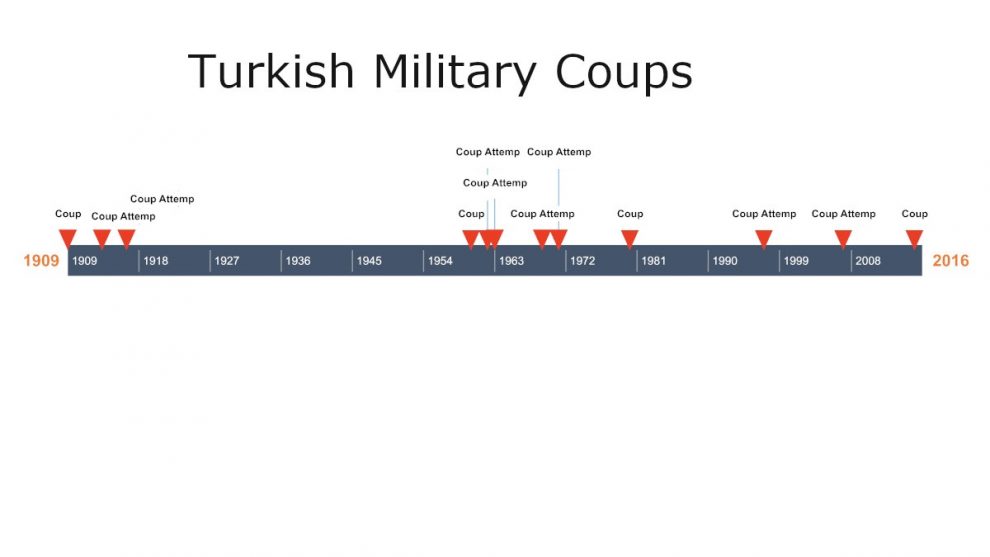 It has been two full years since Turks overturned what then appeared to be a military putsch on July 15 and 16. People in Turkey have had five full-fledged military coups that toppled legitimate governments and installed army-backed rulers. Since the 1909 coup, the Turkish military has entrenched its veto power over civilian politics.

Scholars of political modernization call these types of political systems tutelary regimes; that tutelage either stems from de facto power of the army or from the country’s constitution. In the late Ottoman period, the military establishment already had a systemic status to dictate its will over the other political classes, but in 1909, the Sultan, trying to prevent what seemed to be infighting in the army (in Abdulhamid II’s own words “a fratricide”), let the coup leaders get their way, and the military became “Primus inter pares,” or first among equals. Since then their words have carried the day. Perhaps, during the short period of Mustafa Kemal Atatürk’s early reign, civilians, that is to say Atatürk himself and a few of his men, had their way because (a) they themselves were former army people, and (b) the military structure was in disarray right after the dissolution of the Ottoman Empire. But as early as the time of Atatürk’s demise, the army restored its veto power over the civilian government.

The second president of Turkey and Atatürk’s comrade-in-arms during the War of Independence, İsmet İnönü, had to send basic developmental projects – as simple as draining swamps in southeastern Turkey – to the Army chief for approval. The 1960 and 1980 putsches legalized the military’s veto power, incorporating it into the constitution. As Western scholars described them, the “docile Turkish people” voted for the military-drafted Constitution by an overwhelming majority not because they loved it, but because it was the only way to bring civilians back. Yet, the military and its leaders then said that the vote should be construed as the approval of the coup. This interpretation seems to be stuck till today: Since Turks are extremely obedient – not even resisting the hanging of a civilian prime minister and his two ministers by the army, now they will approve the military’s constitution giving the military legal status over civilian politics.

Consequently, using the instruments designed in that Constitution, a military junta forced a perfectly legal and working coalition government to resign and replaced it with a minority government in 1997.There is a law of diminishing returns in economics, referring to a point where the level of benefits gained is less than the amount of money invested. There must be a law of diminishing obedience in politics: where the level of people’s hatred strengthens as the level of the anti-democratic push increases.

Also, there was a new media in Turkey: on that faithful day in July 2016, Turks had the largest ratio of cell phones per capita in Europe: 1.8 phones per person. The Justice and Development Party (AK Party) of President Erdoğan had installed the largest fiber network in Europe in 81 provinces in Turkey.

Those who thought that Turkish people would be scared and hide in their homes, as they did in previous military coups, were wrong. This time the world witnessed a strange thing happening: not one person like silly Boris Yeltsin climbing alone on a tank in Moscow, but thousands of people climbing on hundreds of tanks, lying on tanks’ tracks, throwing blankets on their turrets blinding the drivers, parking their cars and trucks in front of the military bases all over Turkey, thus stopping a military coup.