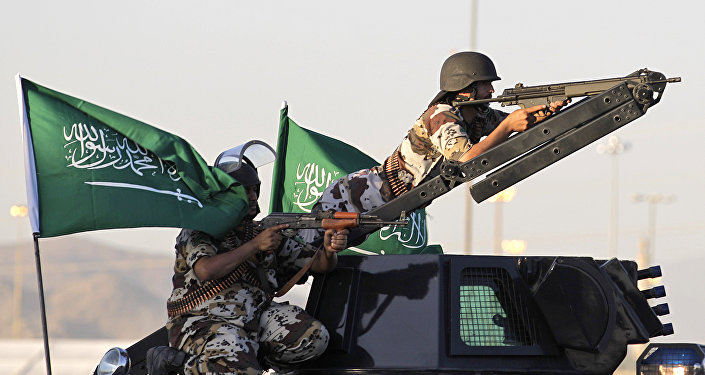 Saudi Arabia has discredited itself by cozying up to Israel, a racist militia enclave pretending to be a country, and helping colonial invader projects in the Middle East.
For the Saudi leadership, Israeli terrorism is no terrorism, but millions of Palestinians suffering Jewish settler terror must show it servile deference. Saudi Arabia and its partners in various geopolitical schemes would rather fight the Palestinians than their Israel oppressors. They would rather fight Muslims than those who come from thousands of miles to plunder and terrorize Muslim countries.
The Saudi approach to tackling terrorism would have appeared less ludicrous if it had not tried to enlist other countries under the pompous umbrella of the Islamic Military Counter-Terrorism Coalition (IMCTC).
This coalition is supposed to act as a platform to help member countries in their counterterrorism operations through intelligence sharing and capacity building.
How is that different from a small number of Muslim countries working with each other on their own in building capacity, sharing expertise and sharpening the tools to fight terrorism that is increasing directed against them? It’s different in the sense that the Saudi approach towards terrorism actually foments more terrorism and helps those global actors who rely on terrorism to destabilize other countries. The “anti-terrorism coalition” looks like a scheme straight out the CIA playbook.
The symbiotic relationship between the Saudi regime and America’s military-industrial complex and the global war industry should make us think how a multinational platform would work under Saudi patronage.
Behind the scenes, America’s war and intelligence machine would control the information in Saudi possession. Neocons and Zionists may gain easy access to too much information about people, business enterprises and institutions in the countries whose trade or foreign policies challenge Uncle Sam.
Like-minded Muslim countries indeed need to join hands to fight terrorism. They should join hands to help Nigeria and Somalia against terrorism and destabilization plots. They should unite to repel wars of aggression and strike against those who indulge in the kind of atrocities that are taking place in Myanmar and the Central African Republic.
The Saudi “anti-terrorism coalition” is good for occasional exercises of extravagant dinners and ceremonial photographs.
It is not clear what makes Saudi Arabia so qualified to host the anti-terror coalition and become the repository of sensitive information. Some of the pro-Western coalition members host human traffickers, money-launderers, Israeli agents, and Anglo-American-French military contractors. Would their details be available to combat terrorism?
Sensitive information in hostile hands can result in situations like the 15 July 2016 coup in Turkey. The role played by foreign masterminds in the coup has been documented. Several top wanted criminals have found refuge in the US and European Union.
Saudi Arabia’s close alliance with the US and the Western bloc, which have a notorious record of arming and funding terrorist groups is problematic in itself. When the “anti-terrorism coalition” plan was presented in the US President Donald Trump’s theatrical presence in Riyadh, its hidden agenda was apparent.
The Saudi “Quartet”, which includes the United Arab Emirates, Bahrain and Egypt, soon made a dramatic political move by targeting Qatar with the anti-terror stick. It must have been an embarrassment for most Muslim leaders who bothered to travel to Riyadh for the Trump circus. Saudi Arabia should not embarrass Muslims any further and do all its ego wars or political fights alone or with the help of Abu Dhabi’s Mohammed Bin Zayed and Egyptian ruler Abdel Fattah El-Sisi.
Iran is another country targeted by Saudi Arabia in its “anti-terrorism” fight. Iran has done a lot to harm to Muslim unity with its sectarianism and Khomeinist world view, but it is still less reckless than some of Saudi Arabia’s closest allies.
It doesn’t matter that the anti-terrorism coalition is commanded by well-respected and retired Pakistani general Raheel Sharif. What matters is that the commander is employed by Saudi crown prince Mohammed Bin Salman and lives under Saudi jurisdiction.
If Iran earned notoriety among Muslims because of its role in Syria’s massacres, Saudi Arabia has lost respect because of its slaughter of Yemeni civilians. The beneficiaries in the two conflicts are those who thrive on exporting arms and disasters.
The Muslim world is not obliged to ally with Saudi Arabia as long as Riyadh is allied with those who do killings and cause mayhem in Arab and Islamic countries.
In Africa, both Muslim and non-Muslim countries are being subjected to Western destabilization efforts through terrorism. In Syria and Iraq, terrorism groups are being trained, funded and armed with the aim of destabilizing the whole region. The US is deeply involved in these schemes and feels so confident about its terror alliances that it dares to cock a snook at Turkey.
Of course, the Saudi alliance will never talk about this terrorism.

Distractions, disunity and the unnecessary clash of ideas
What did Turkey do to NATO?
Comment