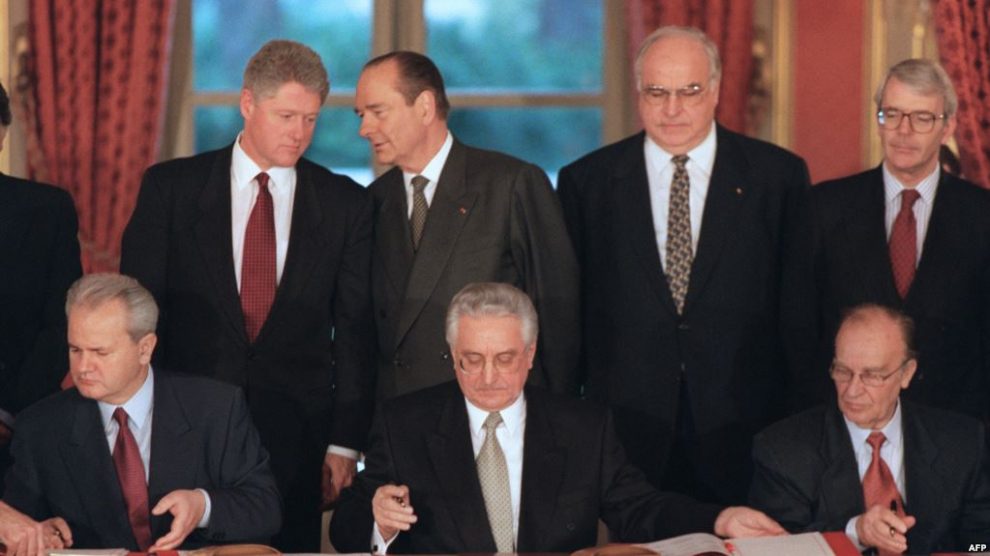 On a chilly and rainy Sunday morning on February 2017, I looked out my window in Sarajevo to check on my car. I could not see it where I had parked it the previous night. I looked again, this time more carefully. It was not there. I rubbed my sleepy eyes and slowly moved from one end to another of the parking lot of the 18-floor apartment where I still live. The car was gone. It took me only a few minutes to accept the fact that it was stolen. Because car theft is a common issue in the Bosnian capital, Sarajevo. And the reason why my car -and most others for that matter- was stolen was the Dayton Peace Agreement which ended 3.5 years Bosnian war. If you wonder how could possibly The Dayton Agreement be responsible for the theft of my car, please read on.
The first president of the independent Bosnia Herzegovina, Alija Izzetbegovic, was given no choice but to sign the Dayton Peace Agreement on November 21st, 1995 in Dayton, Ohio. The agreement ended the Bosnian war which claimed over 100 thousand lives mostly Bosniaks. But it accomplished almost nothing more than just that. Izzetbegovic was not willing to sign the agreement because it was “legalizing” the genocide entity, Republika Srpska (RS). Bosnian Serbs murdered tens of thousands of Bosniaks throughout the country during the war and the Dayton granted legal status to the Serbian entity within Bosnia which would administer nearly half of the country. Izzetbegovic had to bow to the pressure of the West and signed the deal which at least ended the killings of Bosniaks.
The Dayton created a complex, highly decentralized power-sharing system which is not understood by many Bosnians even today. 2 entities and one specially administered district were created by the Dayton: Bosnia Herzegovina Federation, Republika Srpska and Special district of Brcko. Bosnia Herzegovina Federation administers around 51 percent of the country and 70 percent of the entity is made up by Bosniaks while 25 percent is Croats and 5 percent Serbs. The federation has a president and a prime minister as well as the cabinet. There are 10 cantons under the federation each of which has its own prime minister and cabinets. Republika Srpska is dominated by the Serbs and administers nearly 49 percent of the country. RS also has a president and a prime minister. Lastly, there is the District of Brcko run by a internationally- appointed officer. Complication continues at the state level as well. There are 3 presidents each represents one ethnic group and rotate their term in office. And there is a Prime Minister-like figure and a cabinet under the president. So there is total of 5 presidents, 13 prime ministers in Bosnia. The number of ministers if one wanders, “only Allah knows says Adis Patkovic, 32 years old cameramen from Sarajevo,” as the answer. In all levels, there are around 260 ministers in Bosnia.
22 years after it was signed, The Dayton failed to create a viable state and solve ethnic issues. Bosnia lacks many pillars of a viable state let alone ethnic frictions totally locking up the government institutions. Most important of them is the single police force. Although it was envisaged in the document, creation of single police force was never accomplished. A huge hole left in the Bosnian state by the Dayton. Republika Srpska and the Bosnia Herzegovina Federation each have their own police forces. So since the administrative border of Republika Srpska starts at just outside of Sarajevo, the jurisdiction of Bosniak police ends there. In other words, if someone commits a crime in Sarajevo and manages to run away just a couple of kilometers, the person is outside of the jurisdiction of the Federation police. So the suspect needs to be searched-captured by the Bosnian Serb police, something that does not happen in most cases. So back to the top: My stolen car. Because it is so easy to get out of the Federation police jurisdiction, car theft is very common in Sarajevo. A thief only needs to break into a car and carefully drive a couple of kilometers to get into Republika Srpska. So just as my car, many other cars get stolen in the Bosnian capital almost on a daily base.
One united police force is one of the most vital elements of a viable state. And The Dayton has failed to create it. With all the other ethnic-related issues, Bosnia is considered by many experts as the “failed state”. On the 22nd anniversary of the agreement, ıt only gets gloomier for Bosnians. While everyone else in the West is focused on the middle east, Bosnia again slides towards darker futures.