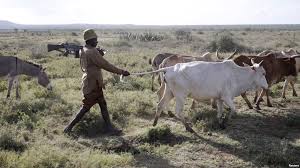 Kenya has many communities whose livelihoods revolve around animal keeping. In northern Kenya for example, the Samburu, Pokot and Turkana communities and on the southern part the Maasai community keep livestock as their main source of livelihood. Despite the attempts to help the communities diversify their sources of livelihoods, livestock keeping has remained a major source of livelihood to these communities. They depend on natural pastures and grazing of livestock in open fields, often moving from one place to another in search of water and pastures. Consequently, making them fairly unstable in reference to permanent residence. Coupled with this is the challenge emanating from the cross-border effects since most of these communities live along the borders. The Maasai for instance live along the Kenya-Tanzania border while the Pokot live along the Kenya-Uganda border and the Turkana’s live along Kenya-Uganda/South Sudan and Ethiopian borders.

The location of these communities have been a problem to them especially in securing their livelihoods. The insecurity around the border region of South Sudan has led to smuggling of small arms into the hands of these pastoralists. This has been compounded by the presence of pastoralist communities across the borders who also want to acquire as many livestock as possible leading to cross-border raids. Despite the fact that culturally raiding other communities for livestock is a norm, the availability of arms has altered the way and manner with which these raids occur. Problem also stem from the porosity of the borders and the inability of the government to effectively control the border and provide security to the ever moving communities. This has meant that the members take arms to protect themselves against other communities.

The arms have had a great impact on the lives of these communities as many have been killed and wounded in raids and retaliatory attacks. The governments both of Uganda and Kenya has also carried out disarmament exercises in the bid to manage the proliferation of the arms in this region. The exercises which have also had their negative impact on these communities in some cases making them more vulnerable to neighbors as well as distancing them from their governments. Despite the disarmament on Ugandan side being seen to have born much fruit, Kenyan government has not completely succeeded in disarming these communities. The proliferation of the arms has made the region relatively insecure affecting the provision of basic services like education and health care. Some schools for instance have been set up in border communities to help reduce the mistrust between communities like Cheputel Boys High School in 2005 between the Pokot and the Marakwet the school has however turned into a magnet for attacks and did not admit students for form one this year.

The attacks have made the enrolments of students in these schools to dwindle as well as drop to zero levels in some schools. This conflict is generating illiteracy which is complicating further the efforts to help these communities diversify their sources of livelihoods. The movement from one place to another occasioned by drought has been another challenge in attaining education goals in these communities. Despite the government coming up with plans of establishing make-shift schools, the security challenge as well as frequency of movements have made this plan to achieve little success. As the drought continue and the scarcity of water and pasture increases little is expected unless radical measures are put in place in ensuring alternative sources of water and more efforts put in helping the communities adopt alternative lifestyles. This can only be realized through a multi-stakeholders approach involving both the government, civil-society groups, locals and international development partners.

In the recent past the effects of drought on these communities have led to great losses to the communities. The Maasai for instance crossed into Tanzania with their animals looking for water and pasture what led to auctioning of their cattle by the Tanzanian government. This meant a loss of livelihoods to many families despite the fact that they entered a different territory. Within the Kenyan border itself as well, the Samburu lost over 300 cattle who were shot by police on the claim of straying into private ranches. Though the herders are always viewed as armed and at times used force to break into people’s private ranches but some people have question the action of killing the cattle and termed it inappropriate. Evidently, the Kenyan herders face multi-prong challenges both emanating from the arms and the culture of cattle raids to drought and the uncertainties of the destinations. The livelihoods of the herders in Kenya is increasing becoming precarious and without quick targeted interventions some members of these communities will continue to lag behind in human development against the hope of the global community.

ON THE 22nd ANNIVERSARY, HOW THE DAYTON IS RESPONSIBLE FOR EVEN THE SMALLEST CRIMES IN BOSNIA
Salman like a bull in a china shop
Comment