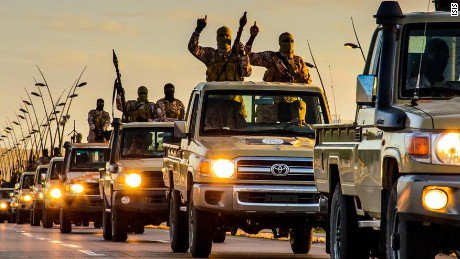 In the Middle East, the heart of the world, the balance of powers has not become clear yet. In the multi-equational area, Russia, Turkey, Iran, the USA and Syria are trying to have an advantage by laying their cards on the table respectively as they have efficient powers.

Every single day, a new move is being put forward. The easiest one among them is blaming the opposite party regardless of the truth. The complication in the region, the parties’ supports to different groups in different regions, speeches given on media, perception studies made with 140 characters (now 280) make the works easier.

Although BBC’s news that the USA has permitted ISIS militants to exit Raqqa is present and the statement of Hillary Clinton that they founded “Al-Qaeda” and Trump’s statement “Obama founded ‘ISIS’” are known, with the news indicating that Turkey supports ISIS, it is desired to victorious in “Proxy” war.

For what purpose and by whom ISIS was found can be only known by the founders for sure. After it was founded, it may have experienced a change of purpose and direction. It is clear that Israel has never been the target of ISIS since it was founded. No ISIS rocket has been launched Israeli territories. No Israeli soldier died. Many countries have their shares of the terrorist actions of ISIS, so as the USA is also included, Israel maintains as being forgotten by ISIS. ISIS is an organization founded in favour of (?) Islam, Israel is the sworn enemy of Islam. It is strange.

Although Turkey has highly suffered from ISIS, it is very tragic to create a perception of helping ISIS. ISIS brought many Turkish young people into the fold as in all Christian countries. In fact the main human source of ISIS is Europe; not even Turkey.

ISIS has performed striking, agonizing and planned bombings. When all of these are examined one by one, they are kind of effective, powerful, shocking and hurtful which can drag the country to chaos. Anatolian citizens have not been affected by these actions by embracing each other in every action and becoming integrated.

Turkey’s effective ISIS fight domestically and abroad has come to an end through the zero tolerance principle of the security forces. Cross-border precautions have limited the inland terror and left no area of action. Bankrupting financial resources and consuming human resources can be considered as the most efficient precautions.

The sincere Western sources should look up to Turkey’s fight instead of trying to show Turkey in the side of ISIS.