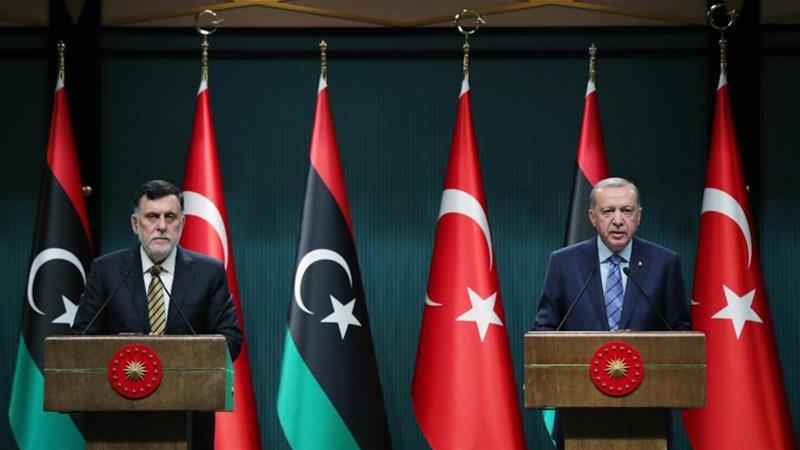 ANKARA (AA) – Turkey has been the lone country to defend Libyan democracy through its material support to the Government of National Accord (GNA), concluded a think tank report published from United States on Wednesday.

In a detailed analysis, Washington-based The National Interest Foundation in its “A Case Study on Libya: How External Actors Play a Major Role in Domestic Instability” noted that all other foreigner powers in Libya are “complicit in undermining the internationally-recognized GNA”.

“The regimes in Egypt, the United Arab Emirates, Saudi Arabia, Jordan, Russia, and France are all complicit in undermining the internationally-recognized GNA and contributing to bloodshed in Libya,” the report said.

Turkey has extended support to the GNA led by Prime Minister Fayez al-Sarraj and over the last month, has over turned tables in the conflict-ridden country.

“Despite Libya being an initial success story of the Arab Spring in toppling an authoritarian government and securing democratic elections, the ongoing Libyan conflict has undoubtedly been prolonged by the interference of malicious, foreign actors,” the report said.

However, it asserted: “on the other hand, Turkey has been the lone country to defend Libyan democracy through its material support to the GNA. Since Turkey’s military entrance into the Libyan civil war, the GNA has gained the upper hand over Khalifa Haftar’s forces. Had the destabilizing actors never intervened and perpetuated the conflict, Libya would be heralded as an unquestioned success story of the Arab Spring.”

GNA has gained many territories previously occupied war-lord Khalifa Haftar who has been accused of war crimes.

Following the liberation of territories once held by Haftar’s militants in the city of Tarhuna and its surroundings, many mass graves were unearthed, and Libyan officials urged international judicial authorities to take action.

The International Criminal Court (ICC) has taken notice of the mass graves in Libya which contain men, women and children.

The report identified Egypt, the United Arab Emirates, and Turkey as the “primary actors” in Libya while Saudi Arabia, Jordan, Russia, and France were the “secondary”.

“All of the aforementioned countries back Haftar’s LNA (Libyan National Army), with the exception of Turkey which supports the democratically-elected GNA,” The National Interest Foundation report said.

“Egypt has played a fundamental role in destabilizing Libya through the backing of Khalifa Haftar… the Egyptian government led by Abdel Fateh el-Sisi has funneled money, weapons, and logistical support to Haftar’s Libyan National Army,” the report added.

The report exposes the duplicity of military dictator Sisi.

“The (recent) Cairo Declaration has epitomized Egypt’s hypocrisy on the issue of Libya by essentially designating Haftar’s forces as the lone security apparatus in the country, despite their recent military defeats. Egypt is also willing to turn a blind eye to human rights violations committed by Haftar,” it explained.

On its dubious role in Libya, the think tank said about UAE: “The Emirati government has waged a campaign of disinformation to discredit political Islam through media, policy, think-tanks, lobbying, and more, due to Abu Dhabi viewing it as an existential threat to its rule. The rise of democracy is also dangerous to the dynastic power structure currently utilized by the U.A.E., and Emirati leadership view these administrations as a long-term threat to itself and other Gulf monarchies.”