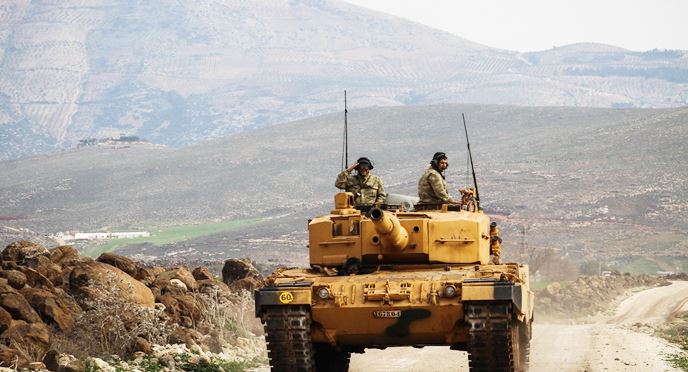 After the Operation Euphrates Shield, in the last months Turkey has carried out a second operation for safety of de-conflict zones in Idlib. As this operation has been completed, preparations began for the new military operation and the Operation Olive Branch was launched in January 20, 2018.

As a country making operations within the borders of another country is subject to certain rules within the existing system of international relations, Turkey has announced that the operation is based on Article 51 of the UN Charter for the operation. That article also gives the UN member states the right to self-defense in case of armed attack. The Turkish government argues that Syria by supporting PKK tries to create a front against Turkey in the Arab world and currently conducts a covert war against Turkey. According to Turkey, this situation gives Turkey the legitimate right to defend.

Foreign Ministry officials insistently declares in their statement that Syria poses a threat to our national unity by supporting the people threatening territorial integrity of Turkey and by colluding their activities in the region.

The expression used in Article 51 of the UN Charter is as follows:

“Nothing in the present Charter shall impair the inherent right of individual or collective self-defence if an armed attack occurs against a Member of the United Nations, until the Security Council has taken measures necessary to maintain international peace and security. Measures taken by Members in the exercise of this right of self-defence shall be immediately reported to the Security Council and shall not in any way affect the authority and responsibility of the Security Council under the present Charter to take at any time such action as it deems necessary in order to maintain or restore international peace and security.”

As known, there are two important norms in international relations literature. One of them is the original Latin phrase ‘jus ad bellum’, meaning that a rule expressing the right of a country to launch a war. Turkey attributes the Operation Olive Branch to the Article 51 of the UN Chartes within the framework of Just War Theory.

What should be noted here is that the war should be carried out in accordance with a justifiable cause, the intention of settlement of peace after reaching the war targets and the announcement of the war to all concerned. Turkey claims the PKK terrorist organisation causing major problems for many years operates with a different name (PYD/YPG) in Syria with the intention of harming Turkey. PYD/YPG forces deployed in Afrin region of Syria have done constant harassment to Turkey. One of the most basic arguments based on Afrin operations is the existence of these terrorist groups and that the Syrian government does not have the power to prevent the activities of the terrorist organizations. And/or according to the other claim Syria is supporting them in a detrimental manner deliberately against Turkey.

The second important rule in case of a war or military action is the jus in bello with its original Latin statement. It implies that the obligation to follow the moral rules in war.

An important point here is that military targets and civilian targets are separated during the campaign and that civilians are not damaged as much as possible from the conflict. The other is the use of a proportional force during the armed struggle.

It is important that the link between civilian population and the terrorist groups in Afrin is not as strong as it is alleged, despite the PKK/PYD and its supporters insisting strongly against the international community. The terrorists kidnap the children by threatening them and arm the children against Turkey. They also use them as a human shield against Turkey. This point also raises Turkey’s rightness in terms of international law.

Turkey highlights the point of conducting a just campaign and is trying to comply with these rules as he could. The fact that the operation is conducted slowly and controlled is an important indicator of these efforts. Otherwise, the Turkish army with its all potential could have many loss of life and property in Afrin.

Despite this fact, the PKK/PYD circles carry out perception management operations and try to spread the lie that the Turkish army is using chemical weapons and bombing civilians without hesitation. While the massacres of the Syrian and Russian forces in Idlib and other areas were not in the news even as a line, they keenly proclaim the lies about the Turkish military to the world public.

Turkey states that the campaign will come to an end when at least 6000 militants are neutralized or leave the Afrin region, hence the threat will be disappeared for Turkey. It has been constantly declared that Turkey has no intention to invade Syrian territory.

After Afrin, the next is the other problematic issues

As stated firstly by the President Recep Tayyip Erdogan and then other Turkish officials, cleaning Manbij from terrorist elements is among the important goals for Turkey. Of course, another important point is that purging the Syrian border area from the terrorist forces, which is almost 911 km. All these objectives are based on the Article 51 of the UN Charter and comply with international law and norms.

We hope that the decisive and determined attitude may ensure that these targets will be achieved in time.

In brief, Turkey conducts an legitimate operation which maintains international rules and norms against the PKK/PYD/YPG forces, which is an enormous threat for Turkey, strongly backed overtly or covertly by the so-called allies of Turkey despite all the difficult conditions. The important point here is to ensure that the number of civilian and innocent people affected by the operation will be kept as small as possible, despite all aggressive attacks.

In addition, Turkish aid agencies have met the various needs of civilian population, who have been compelled to the exile and suffer from these events. These institutions fulfill the needs of civilians and other humanitarian needs. Also, it is unfortunately the sad truth of the world that the first world states, which are called powerful, do not have the slightest efforts to restore this heart-wrenching humanitarian plight.

It is important to note that the efforts of all the military and civil servants who struggle in these difficult conditions are well worthy of respect and deserve admiration.

May Allah have mercy on all our sons who have martyred in the struggle. And may Allah grant those who are injured a quick recovery.

The meaning of “Operation Olive Branch”
Why is the Free Syrian Army aligning with Turkey in Syria?
Comment