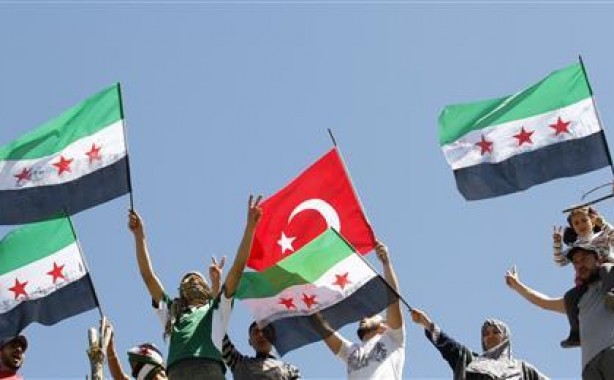 Is it in the interest of Syrian armed opposition groups, and specifically the Free Syrian Army, to ally with Turkey in Operation Olive Branch?

As Turkey and the Free Syrian Army as part of Operation Olive Branch enter the PYD/YPG – the Syrian affiliate of the PKK – Afrin region one can’t help but immediately think that this ought not to be the opposition’s war.

In recent weeks, Assad, Iran and Russia have recently moved to conquer Idlib, with hundreds of thousands of Syrians cleansed from the opposition’s largest remaining stronghold over a matter of weeks.

So why then are there several thousand Turkish-trained and armed Syrian opposition currently doing the bidding of Turkey and launching a ground assault on the PYD and its armed wing the People’s Protection Units (YPG)? Wouldn’t these forces be better utilised in Idlib fighting against Bashar al Assad?

Regardless of what one thinks of the YPG, or indeed the Syrian armed opposition, any reasonable observer would conclude that Syrian opposition forces fighting the PYD/YPG represents a further degradation in the conflict.

But Syria’s war is far from reasonable. As ever, while Olive Branch ought to be opposed by supporters of the Syrian revolution, the reality is that over the years this confrontation has become something of an inevitability.

As I wrote previously, the YPG’s initial rise to power in Syria was not precipitated by a popular pulse among Kurds within “Rojava”, but rather due to a deal it made with Assad, in 2012 thanks to a combination of two important root factors; Assad’s forces withdrew from Rojava, so they could be utilised against the rebels, while the YPG was given de facto control of the area, with its rule being subsidised by Assad.

The YPG has never had any real will to support the cause of the revolution, while Turkey’s influence over the opposition meant that rebel overtures to the YPG by supporting autonomy have largely been off limits.

But these are the elements that underlie the consequent rebel-PYD animus. It’s perfectly true that two wrongs don’t make a right, but if you accept the argument – as many of the YPG’s manifold supporters in the West do – that the YPG joining with Assad, Iran and Russia in conquering Free Aleppo was necessary to secure its own interests in Rojava, it’s difficult to then blame some of the Syrian opposition for participating in Olive Branch.

Are they not also simply doing what they believe is necessary to secure the interests of the anti-Assad cause? It was precisely the same with their participation in Euphrates Shield, which was the Turkish-backed offensive by rebels to take back Syrian towns and villages the YPG grabbed under the cover of Russian air strikes to try to join up the “cantons” that comprise Rojava.

While Turkey’s endgame in Afrin remains unnervingly nebulous and vague, the opposition perspective, however naive you might think it is, contains a logic.

Many of us warned that there would be ramifications of Aleppo falling in the manner it did. As rebel-supporting areas of the city were ethnically cleansed by the regime, or as mass terror was unleashed on Syrian residents of the recently conquered Aleppo by Assad’s ruthless organs of domination, the PYD’s enclaves were cooperating with the murderers, torturers and death squads.

And while revenge is never a good motive, the PYD’s support for Russia and Assad has obviously fostered the idea among anti-Assad rebels that the PYD is inexorably counter-revolutionary.

When Turkey and its allies intervened in Idlib last Autumn to aid the existing moderate rebels counter the growing menace of Al Qaeda within the Hayat Tahrir al Sham coalition, many said this was secretly a move by Turkey to destroy the rebellion from within and force the rebels to accept Russia’s conception of ‘peace’.

But the reality is that Turkey managed to split HTS, with the al-Qaeda-supporting wing opposing Turkish intervention and continuing to wage war on the rebels, while the pro-intervention wing disowned Al Qaeda and sided with the moderate rebels and Turkey.

Establishing an opposition presence in Afrin would create a corridor from which they could confront and neutralise the Al Qaeda-linked wing of HTS.

But of even more importance, with an opposition presence established in the Afrin area, it makes it possible for them to defend Idlib and, in the long-term, liberate Aleppo.

With this same presence established in the Afrin area, as opposed to a Russian one – that has moved out since Turkey announced the beginning of Olive Branch – it makes it less likely for the YPG to be able to, as they did in Aleppo, aid Assad’s forces in attacking Idlib and bolstering the occupation of Aleppo city by pro-Assad forces.

It has been claimed by the YPG, and assumed by many pundits, that Russia withdrawing from Afrin is the result of a deal with Turkey.

Some believe that this deal will see Russia sacrifice Afrin to Turkey in exchange for Turkey sacrificing Idlib to Russia, but this is highly implausible.

It’s assumed that Russia wouldn’t let Turkey ‘violate’ Syrian airspace, but this assumes that the already stretched Russia would want to risk a confrontation with the NATO-member state Turkey, while it also forgets the fact that Turkey conducted the almost year-long Operation Euphrates Shield, in which its military and air force engaged in operations within Syria against the YPG – and Russia couldn’t do a thing to stop it.

In fact, far from sacrificing Idlib, Turkey most recently sent in a convoy of armoured vehicles to enforce the de-escalation zone that Assad and Russia have been violating repeatedly.

None of this is to say that Olive Branch is by any means a good thing, but it would be dishonest to say there isn’t a logic behind rebel support for or participation in it.

Likely, Turkey’s aim is not even to get rid of the YPG, as per its rhetoric, but rather to establish a long-term pro-Turkish rebel presence and stop the YPG from advancing any further and from serving as a launchpad for the PKK within Turkey.

The YPG has danced with too many devils – it became the proxy force of the US against IS (Daesh), while it also zealously welcomed Russia’s intervention. With the false comfort of the US, it crossed the Euphrates – a Turkish red line – and it stayed there, while the US unveiled plans to form a new ‘border force’ out of the YPG. When Turkey made its move against Afrin, none of its allies protested.

It could also be that at some point Turkey will abandon the Syrian rebels after its done with them in Afrin, but while unlikely, it does demonstrate the precariousness of the fate of Syrians.

Whatever the outcome, the fact that Syria’s fate has come down to the whims of foreign states and not the Syrian people, whether Arab or Kurd, is by no means a positive development.

Operation Olive Branch: A Campaign In Accordance with International Laws
Every photo tells a story, but this one does more
Comment