Turkish army launched Operation Spring Peace against YPG, PKK’s Syria branch, at 16.00 p.m. yesterday. Agencies report that Turkish troops are 7 kilometers deep inside Tal Abyad and seized some villages. Turkey, a NATO member, has long warned the United States not to arm and enable PKK/YPG to found their own state, which is an existential threat to Turkey’s security. While US bureaucracy ignored Turkey’s concerns, President Trump greenlighted Turkey’s intervention last Monday.

Turkish authorities say they will establish a 30-km deep safe zone across Turkish-Syrian border for repatriating 2 million Syrian refugees staying in Turkey. On the other hand, Arab states, except for Qatar, condemned Turkey’s operation despite that the safe zone will be established for Arab people. On the other hand, US senators led by Lindsay Graham have prepared a draft to sanction Turkey for its incursion. Graham himself had claimed that YPG and PKK were actually the same terrorist group in 2016. 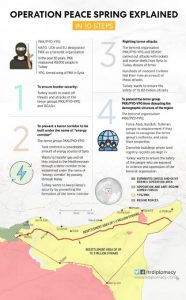